Growing companies demand instant ­gratification — or ­something close to that — for their IT investments today. That means ROI measured in months, not years.

“We saw the benefits as soon as we spun up the HCI servers,” says Dave Wiley, IT manager at Mayfran International, a Cleveland-based manufacturer of machine tool products, ­material handling equipment and filtration systems. The company installed three Cisco HyperFlex HX servers in May 2017 to run many of its core enterprise applications.

“End users could tell immediately that we installed faster servers,” Wiley says. In the first year, an additional benefit kicked in: “We needed more disk capacity, so we expanded from three servers to four. Scalability proved to be smooth with HCI.”

Capstone Nutrition, a maker of ­vitamins, probiotics and other wellness products, likewise tapped into HCI when it installed Nutanix on Dell EMC XC servers last year. Like Mayfran, Capstone saw an impressive return on its investment.

“Once the servers were running, we immediately had redundancy that wasn’t available previously,” says Brady Harris, IT manager and network and systems administrator for the Ogden, Utah-based company. “Just to know that if we had a hardware failure, our production lines wouldn’t go down was a huge ROI for us.” 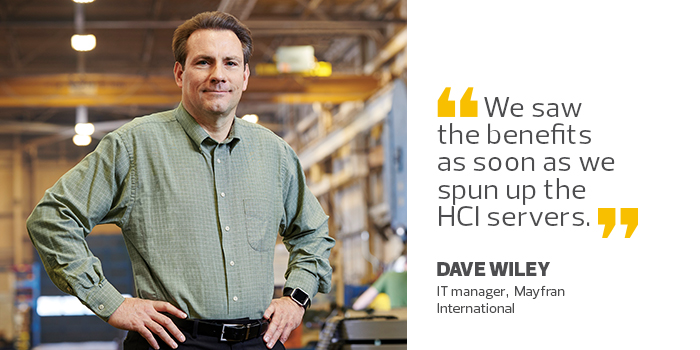 The quick returns come in part from having a single interface for creating the shared pool of IT resources, which can be allocated on the fly to accommodate changing business needs, says Mike Leone, senior analyst with the Enterprise Strategy Group. In addition to Cisco and Nutanix, established HCI vendors include Dell EMC, IBM and VMware, along with newer entrants such as Pivot3 and Datrium.

To sort out technology choices and implement HCI successfully, IT managers can look to the results of peers with a year or more experience under their belt.

Mayfran’s move to HCI began with a decision two years ago to upgrade its server farm, which was stocked with aging traditional servers nearing end of life. HCI wasn’t immediately on the IT staff’s must-have list.

“We looked at everything,” Wiley says. “We considered new traditional servers, hyperconverged systems — even moving critical applications to the cloud rather than supporting them in-house.”

The IT shop decided the cloud wasn’t right for Mayfran at the time. The staff was convinced that staying on-premises would be cheaper over time and better accommodate the customizations needed for some databases and applications.

Cisco Hyperflex won out over traditional servers because of performance advantages. “Hyperconverged is a more robust and flexible platform than the traditional server and storage area network environments,” Wiley says. “We were also able to buy less hardware than with the traditional approach because HCI converges the physical components to create one large pool of IT resources.”

Cisco outshone other HCI ­solutions because of its proprietary interconnect technology for the internal storage array, which outperformed the SCSI-based alternatives, Wiley says.

Two of the Hyperflex servers are equipped with NVIDIA GRID graphics accelerators to support 3D design engineering in a virtual desktop infrastructure.

Having the pool of IT assets is one of the greatest benefits because it makes it easy to spin up and rightsize resources and avoids having to overprovision when buying hardware, Wiley says.

HCI servers also demand less time from the IT staff for management, compared with dozens of traditional servers and associated SAN units they maintained previously.

“We can move VMs from a Hyperflex box to the resource pool so we don’t have any downtime,” he adds. “In the past, we couldn’t perform maintenance during regular business hours and instead had to devote a weekend to doing it.”

Capstone Nutrition’s six-person IT staff followed a simple formula for supporting business applications in the data center: Each system received a server dedicated to run specific workloads for Microsoft SQL databases, documentation processes, web servers, email communications or production lines. The applications got the power they needed, but at a price: Server utilization averaged about 25 percent, which meant much of the resources remained idle.

“However, storage was heavily utilized,” Harris says. “The physical ­servers were running out of capacity quickly, and we were forced to buy new servers just to get that added storage.”

When the legacy servers neared end of life, Harris turned to the Nutanix HCI alternative. Last year, he implemented five single-unit HCI servers in one rack, which created a 1-terabyte pool of RAM and 52TB of available storage. The move significantly altered the data center’s hardware footprint, consolidating about 30 legacy servers into a cluster and eliminating a second rack.

“HCI has turned out to be the perfect solution for an environment like ours,” Harris says, assessing the results of last year’s modernization project. “We run a large number of workloads, but they’re not resource-intensive. HCI enabled us to utilize the hardware more efficiently.”

Server utilization more than doubled, to about 60 percent today. “It’s great to see us use our hardware investments more efficiently,” Harris says.

That’s just the start of the benefits he’s seen. Although Harris hasn’t yet run the numbers, he’s convinced power and cooling costs have dropped significantly since the consolidation. Server redundancy offers another big relief.

Guarding against cyberattacks is also easier now that the IT staff can focus on a single cluster rather than managing and patching 30 physical servers.

But perhaps the greatest benefit is how it frees the IT staff to focus on helping the company grow.

“We’re able to think more strategically about digital transformation and bringing innovation to the ­company, rather than worrying about servers 24/7,” Harris says.

That freedom already helped speed the transition from 40 traditional PCs for Capstone’s production lines to a Dell Wyse thin client platform that’s connected to the hyperconverged servers. Production workers see greater reliability because the IT staff is centrally ­managing and maintaining the thin ­clients instead of having to patch and troubleshoot ­dozens of old PCs.

Other transformations are in the works. To further increase business ­efficiency and make it easier to meet regulatory reporting requirements, Capstone recently began moving to a paperless workflow, which will also take advantage of the Nutanix servers.

“Our company’s vision is ‘Life Improved,’ and that’s something that hyperconverged technology is doing for me personally,” Harris says.

A Business Case for Hyperconverged Infrastructure

Hyperconverged infrastructure allows many growing companies to optimize technology ­investments and use IT talent more effectively. To determine whether HCI is the right move, Leone suggests CIOs consider three ­crucial advantages promised and rate their value to the business:

Consolidate the Data Center: A handful of HCI nodes can take the place of many traditional servers to open up real estate within data centers and lower costs for power and cooling.

Reduce Management: “Smaller companies don’t have the luxury of a large IT staff,” Leone says. But with a central management console and fewer servers to maintain, HCI makes it easier for limited staffs to deploy and maintain new services.

Speed Up Response Time: Thanks to the plug-and-play ­modularity of HCI, IT shops can quickly deliver new applications to help the business respond to emerging market opportunities and outpace ­competitors, Leone adds. 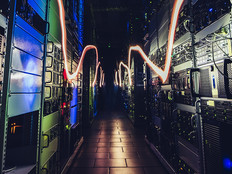