When it comes to the methods by which most work communication gets done, email is still king. But group chat and collaboration applications are becoming more popular —and the market is crowded with competitors, including Google Hangouts, Slack and Skype for Business.

Another player is about join the A-list. Microsoft’s Teams app, introduced last fall, is poised to become one of the market leaders and help change how users collaborate with one another in and out of the office, according to a recent survey from online IT community Spiceworks.

The survey, which received responses in December 2016 from 448 IT professionals in North America and Europe, the Middle East and Africa (EMEA), found that 42 percent of companies with under 100 employees are currently taking advantage of such collaboration tools — and more looking to adopt them in the future. The survey found that 38 percent of firms with 100–499 employees are using them, and 53 percent of companies with 500 or more workers are deploying such tools.

A Changing Market for Collaboration Tools

According to the survey, Skype for Business is the market leader, with 36 percent of organizations using it, followed by Google Hangouts at 16 percent and Slack at 13 percent. Both Microsoft Teams, which came out in November, and Workplace by Facebook, which the social network unveiled in October, had fairly low adoption (Teams was at 3 percent; Workplace by Facebook at 1 percent), but Spiceworks says that’s an expected finding given how new they are in the market.

On the other hand, small and medium-sized businesses are slightly more likely to use Google Hangouts and Slack than their larger counterparts, which could speak to the benefits they bring in cost and usability.

If these plans hold true, Microsoft Teams will be the second most commonly used messaging platform in the workplace by the end of 2018, surpassing Slack and Google Hangouts, and coming in behind only Skype for Business, according to Spiceworks. Since Microsoft also owns Skype, it could move into a dominant position in office collaboration.

There are some clear differences — and differences in perception — between the various chat and collaboration apps, according to Spiceworks. When asked to rank chat apps across different attributes including security, reliability, and innovation, IT professionals rate Slack and Skype for Business at the top players in most areas.

In terms of innovation, Slack was the clear leader, with five times as many IT pros selecting Slack as the category leader over the other providers. Slack was also rated the most user-friendly and compatible with other apps, although by a much slimmer margin.

Google Hangouts is perceived to be the most cost-effective and came in a close second for user friendliness.

Skype for Business is seen as the leader in terms of security, manageability and reliability. Those three traits are important to businesses, especially at larger firms, and this may be why Skype for Business has the highest usage. Skype for Business scored lower ratings on innovation and user-friendliness, but those attributes may play less of a role when IT pros evaluate collaborative chat apps for business purposes, according to Spiceworks.

Microsoft Teams is free to use for companies that subscribe to its Office 365 cloud productivity suite, which has more than 85 million active monthly users. Teams provides persistent, threaded chats, and team conversations are visible to the entire team by default, though the service also offers private chat capabilities.

Users can also create channels to organize conversations by topic, and can customize channels with a feature called Tabs, which provides quick access to frequently used documents and applications. Tabs can be created for Office 365 services like OneNote, SharePoint and Planner, or third-party solutions, such as Zendesk and Asana coming soon.

Slack offers many similar features, and its free tier is easy to join. Slack costs $80 or $150/year per user for its paid plans. A Google Apps (G Suite) subscription can cost an extra $60-$120/year per user, as ZDNet notes. By contrast, Office 365 can cost around $240 per year for the full suite of desktop apps (as well as Skype for Business and Microsoft Teams).

Yet ZDNet notes that “existing Slack customers aren’t likely to switch to Microsoft Teams, because the Office 365 solution doesn't have any way of allowing people outside an organization to participate in a team. That feature is on the roadmap, but without it this is a product for internal teams only.”

While there are clear differences between chat apps, none of them are likely going to replace email altogether anytime soon. Spiceworks found that “while IT pros generally agree that chat apps require less support and are less expensive than email, only 25 percent believe collaborative chat apps will replace email within the next three to five years.” 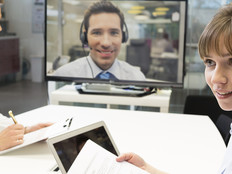