As rain washed out the NASCAR night race at Bristol Motor Speedway in Bristol, Tenn., on Aug. 20, many college football fans were worried. Why the concern?

The race was rescheduled for the following day, giving organizers one less day to prepare for the world’s largest crowd for a major football game. Planners now had only 19 days to transform a race track into a football field for the “Battle at Bristol,” a game pitting the University of Tennessee against Virginia Tech.

The game was attended by 156,990 people (though Guinness World Records’ U.S. head of records management, Kim Partrick, said that only 130,045 fans attended), surpassing the old attendance record of 115,109 set by Notre Dame and Michigan in 2013.

Organizers of the event reflected on how they transformed the stadium for the game during a panel discussion this week at the 2016 Learfield Intercollegiate Athletics Forum in New York City.

Jerry Caldwell, executive vice president and general manager at Bristol Motor Speedway, recounted how the organizers brought in 450 dump trucks of gravel to raise the field three and a half feet. Turf was laid down over more than 100,200 square-feet and contained 180,000 pounds of silica and rubber infill.

“The field played exceptionally well. We could have withstood some setbacks as long as it didn’t have to do with the playing field,” said Dave Hart, athletic director at the University of Tennessee. The players said it was the best artificial field they had ever played on, he added.

Turning a Racetrack into a Stadium

If you want to turn a NASCAR race track into a stadium to host the world’s biggest football game, you need a great deal of cooperation and innovation, said Desiree Reed-Francois, deputy athletic director at Virginia Tech. “We turned a tire barn into a locker room,” she said.

When it comes to lessons learned, Reed-Francois shared two. The first was that open lines of communication are crucial when planning an event like this. Because the organizers built the locker rooms in tire barns, they had to bring in portable showers, which were placed outside the locker rooms and were accessible by a walkway between the showers and the locker room. The second lesson? Don’t forget to put up privacy screens on the walkway so no one can see in, she joked.

“This took three years to plan, and we needed every bit of that,” said Caldwell

Lessons Learned from the Big Game

The event was a huge success, and it helped jump-start the college football season. “This was as iconic as when we had the college basketball game on the aircraft carrier,” said Rob Temple, senior vice president of ESPN’s sports management group.

Hart said that the buildup to the game was excellent. “Our first allocation of 40,000 tickets was gone in 48 hours,” he said. Because the game was scheduled three years in advance, Butch Davis, the head football coach at Tennessee, used the game as a recruiting pitch, telling recruits that they would get to play in front of the largest crowd to ever see a football game.

Reed-Francois noted that an event like the Battle at Bristol can leave a lasting impact on student athletes. “The memories of their experience will last a lifetime,” she said.

There might be more games at Bristol Motor Speedway in the future, Caldwell said. “This is the start of something new,” he said. “We’re already in discussions for future events.” 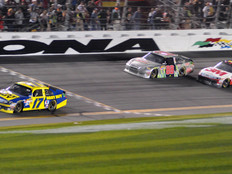 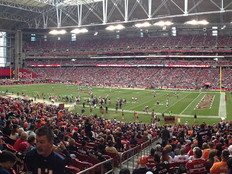