Like many of the athletes competing in the Summer Olympics in Rio de Janeiro, Cisco Systems spent years preparing for its big moment on the global stage.

Since October 2013, Cisco has worked in Brazil after the company was selected to provide networking and enterprise server products as part of its sponsorship with the Olympic organizing committee.

“Ever since London 2012 it’s fair to say that doing the Olympics is in our DNA,” says Maria Dincel, Cisco’s director of global sponsorships and Olympic Games. “After London we put together a global team to win the bid for Rio and we’ve put a lot of effort into expanding our efforts around the Olympics.”

Dincel says more than 8,000 Cisco products have been deployed in Rio for the games, many of them manufactured in Brazil. As part of the deployment, Cisco technicians installed 114,000 local area network ports, 5,000 wireless access points and 440 servers. This network will deliver wireless and networking services for 220 venues, 150 host broadcasters, 25,000 credentialed media, 3,000 employees, more than 70,000 volunteers and 15,000 athletes.

Cisco built the network for the games in partnership with Brazilian telecommunications company Embratel and cellular provider Claro.

Two data centers will power the network, and Cisco plans to bring its global security team to Rio to run its cybersecurity threat management system; workers will be coming from Poland and Toyko.

Cisco worked closely with the community in Rio, and throughout Brazil, to bring its networking technology to the host country.

The company partnered with Rio de Janeiro’s Science and Technology department and the Rio 2016 Organizing Committee to graduate more than 300 IT professionals from the Cisco Networking Academy. Cisco also set up a special Olympic Technical Program to support the games. As of late July, more than 70 of the graduates are working to support the technical team for the Games.

Cisco created a Networking Academy hub in Triagem, a neighborhood in Rio, and connected the lab with Cisco TelePresence and WebEx to other knowledge centers, or “Naves,” throughout the city.

“Think of these as community tech centers, and many of them are located in some of the more disadvantaged areas of Rio,” Dincel says.

For another project, Cisco turned Rio’s Porto Maravilha district into a smart neighborhood. Cisco deployed Wi-Fi throughout the area, and put up interactive kiosks that will let residents and visitors learn about the main attractions around Rio. During the games, the kiosks will connect to customer service agents that will answer questions and offer directions to foreign travelers.

As part of the smart neighborhood project, Cisco also ran an Innovation Challenge for entrepreneurs. The top four ideas from the contest will be deployed as projects around Porto Maravilha before the Olympic Games.

Each year, local governments spend millions to clean and maintain storm drains in Brazilian cities. The project maximizes flowmeter sensors, which are fixed in a plastic basket and placed inside storm drains to retain solid waste; this prevents the waste from flowing into rivers, or from accumulating and causing flooding. NetSensors signals an alert when the plastic basket reaches 70 percent capacity, allowing immediate removal of the accumulated waste.

Getting Aid on the Ground

At the Olympic Integration Center in Rio, executives on the Brazilian Olympic Committee, technical staff and athletes on Team Brazil will have access to Cisco’s immersive technology.

For example, athletes on Team Brazil with medical or training issues can connect with doctors, specialists and trainers worldwide using Cisco TelePresence and WebEx.

“The idea is that an athlete will be able to view a training video with a remote trainer and have the trainer offer ways for the athlete to improve their technique or offer more training tips,” Dincel explains. “Brazil is such a large country, so having this capability has been especially helpful to the staff and the athletes.”

When technology works best it’s transparent to the user. So viewers tuning in to this year’s Summer Olympics may not realize it, but Cisco Systems will handle the back-end networking and video transmissions as they watch the Games.

Maria Dincel, Cisco’s director of global sponsorships and Olympic Games, says the company will process some 130,000 hours of video this summer during the course of the Olympics.

Dincel adds that Cisco’s IP network has been built to more effectively scale video transmissions in the production environment to deliver all types of content, including HD, to the tens of millions of people who will watch the Games.

The network to support 24/7 broadcasting will include the following equipment:

Dincel says moving forward, Cisco plans to build on this experience to deliver even more content for the 2020 Summer Olympics in Tokyo. 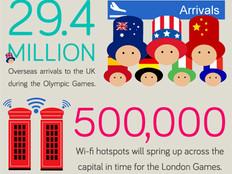