rEvolution uses RFID to create “a unique experience that enables a connection between runners and their family and friends” during Rock ‘n’ Roll races, says Executive Creative Director Brian Quarles.

The Rock ‘n’ Roll Marathon Series has long equipped runners with radio-frequency identification tags to track their location and accurately measure their start and finish times. For the most recent series of runs, sports marketing agency rEvolution came up with a twist on that RFID use.

rEvolution let family and friends write words of encouragement and then displayed those messages electronically on a large LED display along the race course. The notes were beamed to the display when each runner’s tag signaled the the runner was passing.

It was part of a larger campaign for its client, a leading insurance provider that sponsors the marathon. Race organizers kept tabs on the location of runners through RFID tracking mats placed along the course. When runners crossed one of the mats, an RFID reader scanned each runner’s tag, which prompted the system to serve up personal motivational messages on the 9-by-12-foot screens.

“We wanted to develop a unique experience that enabled a connection between runners and their family and friends during the marathon,” says Brian Quarles, the senior vice president and executive creative director who came up with the RFID campaign at Chicago-based rEvolution.

But as RFID becomes more prevalent and affordable, businesses have started to use the technology in new and distinctive ways to enhance the customer experience and operate more efficiently, Koo says. New self-service bars, for example, let people pour their own beer as RFID technology keeps a running tab of their bill. And hotels remotely reassign rooms and let guests switch rooms without having to return to the front desk for new keycards. This expanded use makes sense, says Senthilkumar CP, director of technology at Auburn University’s RFID Lab. “It’s a technology that can be used to automatically and efficiently identify anything.”

The Rock ‘n’ Roll Marathon Series, which holds annual races in 30 cities worldwide, provides each runner with a racing bib with an RFID tag attached to it to identify the runner.

Tracking mats, embedded with the readers, capture runners’ times as they reach marathon milestones, such as the halfway point or finish line. The setup provides real-time race results onsite and even on people’s mobile devices.

Friends and family can use the marathon’s runner-tracking website to sign up for text messages that alert them to a runner’s progress during a race.

rEvolution’s creative team turned the marathon’s RFID technology into an opportunity to socially engage with runners and their families and friends, Quarles says. The marketing firm focused its campaign on people’s motivations for running.

When marathoners picked up bibs before a race, the insurance provider’s booth encouraged them to write on a poster their reasons for running and have their photograph taken with it. The pictures were then posted on a custom microsite, MyDriveComesFrom.com.

To provide runners with even more motivation, family and friends visiting the website could write encouraging messages that would be displayed on an LED screen during the race, Quarles says.

For the technology to work, rEvolution’s IT staff placed its own RFID tracking mat on the race route. The IT department installed networking equipment onsite to connect the mat and LED screen to the company’s data center.

“As soon as runners cross the mat, their RFID tags are matched with the encouraging messages that were previously sent,” he says. “There would be a 10- to 15-second delay that would allow the runners to approach the LED board and see their custom messages displayed.”

The campaign, which ran during marathons in Chicago, Las Vegas, Philadelphia and Virginia Beach, Va., was a huge success, Quarles says.

The microsite received 20,000 page views, 3,000 runners took pictures, and 2,500 people posted messages to help motivate runners. At the Virginia Beach race, for example, one daughter’s message to her mom read: “Keep it up, mom. We love you!” Another read: “I’m proud of you. Keep running and I’ll see you at the finish!”

“We built our campaign around the RFID technology that was provided by the marathon and innovated upon it,” Quarles says.

In Denver, the First Draft Taproom & Kitchen’s use of RFID brings new meaning to the bar-friendly phrase, “Open a tab, please.”

Customers at First Draft don’t need bartenders or servers to bring them drinks. Instead, patrons pour their own drinks, and RFID technology tracks how much they consume and keeps running tabs.

“Being on the forefront of technology gives us a chance to stand out and be different, and it allows beer drinkers to test different styles of craft beer and find out what they like,” says owner Mark Slattery, who opened the bar last year.

First Draft, located in Denver’s River North Arts District, offers 40 types of craft beer, wine and cider on tap, plus a full menu of food. When customers walk in, they use their credit cards to open a tab and present their ID, which employees scan into the point-of-sale system. Employees then pair the customer information to RFID-enabled cards.

Each tap has an Android tablet built into the wall above it, providing information on each beverage. The tablets, which have RFID readers on them, control the taps, Slattery says.

When a customer swipes an RFID card on a tap, the tablet identifies the customer and opens the tap valve. After the customer is done pouring the beverage, the valve locks up. A meter measures the amount poured, accurate by the ounce, Slattery says.

The bar’s IT infrastructure includes a server with a database, network switches and CAT 5 cabling throughout. Slattery uses POS software to price drinks by the ounce. If a drink is rare or popular, he can limit pours. The software also lets him check inventory in real time.

“I can check the kegs, see the percentages of how full they are and order just what’s needed,” he says.

Although other bars around the country have adopted the technology, First Draft Taproom & Kitchen is the first stand-alone self-service bar in Denver. “People really enjoy the experience,” Slattery says.

The resort upgraded its guest rooms with RFID locks two years ago, as part of a massive renovation and technology upgrade after the Trump Organization purchased the property. (Read more about the resort’s IT overhaul at biztechmagazine.com/Doral.)

When guests check in, they receive encrypted RFID keycards that are more secure than magnetic-stripe cards, which can be easily duplicated, says Scott Mahler, the resort’s IT director.

“It gives us good data integrity,” he says. “It’s pretty much impossible for a malicious person to duplicate an RFID card because of the encryption.”

Front desk staffers can reassign rooms remotely. “Say a guest is in Room 201 but wants to be in Room 301. We can do it on the fly,” Mahler says. A receptionist can update an RFID keycard without the guest making a trip to the front desk.

The RFID door and keycard system runs on a wireless ZigBee network, which also manages the HVAC system. Early this year, the IT department upgraded the resort’s uniform management system from barcodes to RFID too. In doing so, it attached new waterproof RFID tags in about 10,000 garments.

In the past, employees had to individually find the barcodes on each piece of clothing and individually scan them in when they picked up their uniforms and returned them.

Now, employees can wave an RFID reader, and it automatically inventories all their clothes at once. RFID readers continually update information into a database, which helps with uniform inventory and accountability, Mahler says.

Companies will continue to innovate because RFID will play an increasingly pivotal role in the Internet of Things, where objects with sensors communicate data over IP networks, he says.

Purdy predicts that the clever and highly custom uses of RFID have really only just begun. “You will see more interesting things going on in the RFID space in the next 10 years than you’ve seen in the past 50 years.”

When customers walked in, they were given an RFID-enabled lanyard. As they saw items they wanted to purchase, they used the lanyard to scan the items into a digital shopping cart. When they went to check out, they paid for and picked up their items.

“The whole idea is to make the shopping experience as seamless as possible and make it unique and different,” says Amy Koo, a principal analyst with Kantar Retail.

Besides experimenting with the customer-facing RFID technology in December, Target is investing heavily in RFID this year for its internal operations. Target is planning to roll out RFID in all its stores this year to improve inventory accuracy.

To learn about other types of in-store technology that retailers are embracing, check out, "Sephora, Neiman Marcus Turn to In-Store Technology to Enhance the Retail Experience." 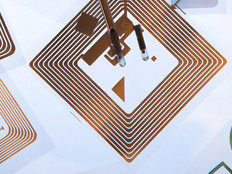 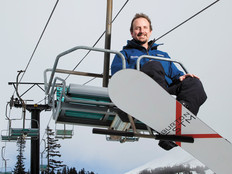