Earlier this year, Apple boldly took the mobile payment bull by the horns when it announced its new Apple Pay product. The new feature, which leverages near-field communication (NFC) in the company's brand-new iPhone 6, has the potential to finally unlock the mobile payments market in the U.S.

To understand how Apple Pay will transform payment processing at retailers in the months ahead, BizTech magazine spoke with Senior Consultant Jason Atkins of AMI-Partners. Atkins follows digital retail trends for the research group.

BIZTECH: Given that a payer needs an iPhone 6 to use Apple Pay, is it something that will move the mobile payments market over the next year or two?

Atkins: The jury is still out concerning whether Apple Pay will move the mobile payments market forward in the United States. Apple has about 400 million global iTunes users, and their payment information is already stored with the company. And with 30 million Americans projected to have an iPhone 6, Apple Pay is better positioned for success than Google Wallet was when it was introduced. With payment information for millions of users already stored, there’s one less hurdle in getting new users to sign up. The real challenge for Apple and all other players in this space will be changing the purchasing behavior of the American consumer.

BIZTECH: Can you explain the financial mechanics of Apple Pay?

Atkins: These are not as clear as they could be to the public yet. Some reports were leaked that said Apple receives 15 cents for every $100 transaction, but this has not been confirmed. What we do know is that Apple Pay only works with Visa, MasterCard and American Express cards issued by Bank of America, Capital One, Chase, Citi and Wells Fargo. These banks account for roughly 83 percent of U.S. credit card transactions.

BIZTECH: What’s the incentive for retailers to participate in Apple Pay?

Atkins: Retailers want to allow their customers to pay using their preferred method of payment. Retailers want to avoid losing customers simply because they don’t offer Apple Pay. From a purchasing preference perspective, it remains to be seen whether Apple and their banking partners will be successful in creating a preference among consumers for using Apple Pay. Fear of liability will also drive many retailers to participate in Apple Pay and services like it over the coming months. In October 2015, the liability for fraud that results from the use of stolen credit card data will shift from processors like MasterCard and Visa to the retailers. Merchants will be given incentives to adopt higher-security NFC technology in the stores, which cost $300 to $500 per unit. NFC technology uses tokenization, which generates unique security codes instead of the consumer’s credit card information to close transactions. This means that any data exposed during a security breach will be useless to thieves.

BIZTECH: Isn’t the ability to pay with a smartphone more universal in Europe and Asia? What has held back the United States?

Atkins: We are the last major market where the magnetic stripe is the predominant method of payment. One important factor hindering the adoption of mobile payments in this country is the lack of a pain point for consumers. Carrying a wallet does not burden a consumer, so they’re not really looking for a different way to pay. As American consumers are shielded from liability for fraudulent use of their credit cards, the data breaches at major retailers like Target and Home Depot have not yet proved to be a pain point significant enough for consumers to start changing how they pay.

It is worth mentioning that merchants’ increasing adoption of NFC-enabled point- of-sale terminals should facilitate a behavior change. Merchants will have every incentive to encourage customers to pay using a more secure service such as Apple Pay so merchants can minimize exposure to risk. 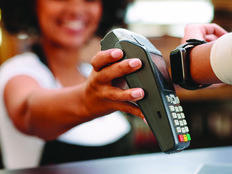