Brian Hill learned at an early age the impact education can have on prisoners. His father, a community college professor, taught a class in California’s Folsom State Prison for years. As bedtime stories, he’d read to Brian the inmates’ personal essays. Father and son would discuss the prisoners’ lack of hope and their potential if given another chance.

“They were thirsty for knowledge, but I remember my father made clear that the system was not well designed to help these individuals,” Hill recalls. “He was doing what he could with the short window of time he had with this small percentage of the population.”

Today, Hill is following in his father’s footsteps. His effort to educate prisoners began with the launch of Jail Education Solutions (JES), a Chicago-based company that provides tablets to inmates who want to pursue an education or vocational training. His aim is to provide prisoners with the skills and knowledge they need to succeed when they are released.

More than half of those released from prison are rearrested within a year, and more than three-quarters are arrested again within five years, according to the Bureau of Justice Statistics. But studies show that convicts who receive education in correctional facilities are less likely to be incarcerated again and more likely to find jobs after their release.

In fact, there is a 43 percent reduction in recidivism among inmates who participate in correctional educational programs, which in turn saves taxpayers money, according to a 2013 Rand study.

“So many prisoners go away at 17 and come out at 32. They have not seen the latest advances in technology. They’ve lost their friends. They have to be a grown-up and live in the real world,” says Hill, a co-founder of JES. “We want to help bridge that gap and make it possible for them to be better prepared, so when they come out, they are used to making decisions and are prepared both academically and from a digital literacy perspective.” 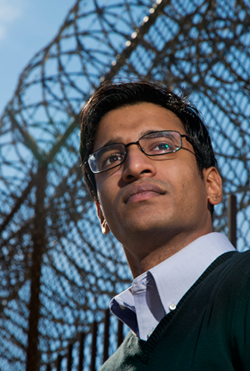 “Why don't we take some of the same content, make it on-demand, enhance it with greater interaction and shift it toward a tablet?”
— Michael Cornstubble, Vice President at JES

From TVs to Tablets

JES’ initial business strategy was to educate prisoners through the television sets in prison common areas. Prisoners spend much of their free time watching daytime television; Hill figured that prisons could swap out the talk shows and soap operas with educational programming.

The startup piloted educational TV programming at the Cook County Jail in Chicago in fall 2013. Content specialists and academic experts developed and curated educational content and worked with prison staff to create a schedule for classes, but they soon discovered that the TV approach had limitations.

Trying to teach as many as 60 inmates in a room with one 32-inch television was not an optimal learning environment. Some inmates couldn’t even hear the TV because of the noise, says Michael Cornstubble, vice president of technology at JES.

To be more effective, JES needed to individualize learning and be able to track each prisoner’s progress, so in 2014 the company developed tablet-based learning software to address these needs.

“We did not reach the population like we wanted with television, so we decided: Why don’t we take some of the same content, make it on-demand, enhance it with greater interaction and shift it toward a tablet?” Cornstubble says.

JES’ first customer for its new tablet-based learning system is the city of Philadelphia, which began a pilot in September 2014. While prisoners are in a prison common area, they can rent JES’ tablets at minimal cost and use the company’s learning software, called Edovo, to take education or vocational training courses.

The company, which has created course content and also partnered with universities and nonprofits for educational materials, offers hundreds of classes, including K–12 and introductory college courses. Edovo also offers nonacademic instruction such as legal information and parenting classes, Hill says.

Many classes are video-based, but some coursework includes reading material and audio lessons. When prisoners finish a course, they are rewarded with games, music or movies, Hill says.

The number of tablets JES hopes to have deployed in the U.S. by the end of 2014.

JES turned to CDW to purchase the technology that powers the learning system, including tablets, mobile device management (MDM) software and IT infrastructure. After considering several tablets, Cornstubble standardized on the Samsung Galaxy Tab 4. He chose a 7-inch tablet instead of a 10-inch because it’s more affordable and has a longer-lasting battery, and its smaller size makes it safer in a prison setting. “The 7-inch provides the screen real estate, weight and battery life we needed,” he says.

JES protects each tablet with a customized case to prevent inmates from breaking the devices and turning them into weapons.

The company is using AirWatch MDM software to lock down the devices and ensure that prisoners can’t tap into any wireless Internet connections or text or email each other on the devices. Inmates can use only Edovo’s stand-alone application to access JES content.

“Communications in jails and prisons are highly regulated and monitored. We have to ensure that inmates are unable to engage in outside communication on the tablets,” Cornstubble says.

JES chose AirWatch because it offers tight integration with Samsung’s SAFE (Samsung for Enterprise) 3.0 security features and Knox 2.0 security platform, he says. Combined, AirWatch and Samsung’s built-in security features allow JES to turn off the home button and menu keys. The technology also disables the power button and prevents inmates from trying to turn off the device and perform a factory reset in an attempt to gain access to the Internet or communications software, he says. JES also purchased LocknCharge EVO 40 tablet carts and charging stations, which are placed in prison and jail common areas. Corrections officers supervise the distribution of tablets during the day and lock them up inside the carts at night, he says.

Cornstubble says CDW helped him immensely during the technology buying process. While he had a vision of what he wanted and specific technologies in mind, CDW Executive Account Manager Edgar Mendoza and CDW Advanced Technology Account Executive Trent Clemen guided him through numerous options.

“Michael is extremely bright, very sharp and technically savvy,” Clemen says. “He asked to look at different options, so we presented him with the best technologies available within CDW’s portfolio.”

Clemen and Mendoza introduced Cornstubble to vendors, so he could see live demonstrations, meet with engineers and learn more about their current technologies and future product plans. Cornstubble says that allowed him to thoroughly evaluate his options and make the right technology choices for the company.

“CDW is phenomenal,” he says. “I could not have done the technology assessments as quickly as I did without my account managers, CDW’s internal resources and their connections to external resources.”

Hill agrees. “CDW has been fantastic. They’ve just been completely at our side helping us with all our hardware needs and ensuring that everything works,” he says.

“Technology drives their business, so they knew they could not shortchange their IT needs when it came to working with jails,” Mendoza says. “They had to make sure it was right and worked the first time out. We were happy to be a part of their effort.”

The greater likelihood former inmates who participated in vocational training were to be employed after being released.

JES got on the city of Philadelphia’s radar through a $100,000 competition that Mayor Michael Nutter launched in 2014, in which he asked entrepreneurs to develop innovative ideas to help solve the city’s crime problem.

The company was one of three winners and was awarded a $30,000 contract to pilot its tablet education program in Philadelphia’s correctional system. Philadelphia launched the pilot by making 15 tablets available to inmates at the Curran-Fromhold Correctional Facility.

Philadelphia has a limited education budget for prisoners, so JES’ technology will help expand educational opportunities to inmates and allow the prison system to meet educational demand, says Story Bellows, director of the Mayor’s Office of New Urban Mechanics in Philadelphia.

“We are excited to have JES’ technology in our prison. We have limited funds for prisoner education. In a time when it is a challenge to fund our schools, asking taxpayers to support better programming services for inmates is not an easy task,” Bellows says. “JES’ technology allows us to have access to different types of educational programming at a low cost. It’s not a burden to the taxpayer. We think it’s an interesting business model and that it will allow us to better serve the inmates that we’re working with.”

If the pilot meets expectations, Philadelphia would like to increase the number of tablets it makes available to its prison population, Bellows adds.

Hill believes the company will be successful through its tablet rental model, in which inmates are charged a nominal fee each day to use the tablets. He’s offering the tablet learning service at no cost to prisons or to taxpayers.

JES executives expect to roll out services to several more prisons throughout the United States and to have about 1,000 tablets deployed to prisoners by the end of 2014. They also hope to work out a way for prisoners to take the General Educational Development tests or other certifications.

“We want to make sure people have the opportunity to learn and achieve, so they have a fighting chance when they exit,” Hill says.

Jail Education Solutions (JES) got its start through Impact Engine, a Chicago-based incubator that focuses on startups addressing societal or environmental challenges. Impact Engine provides a 16-week program that includes seed funding, meetings with mentors and business-building workshops. JES was a great match for the program, with its goal to educate prisoners and reduce recidivism.

“They were incredibly helpful. It was really a game changer,” says Brian Hill, co-founder of JES. “They have a very powerful mentorship program, providing advice on everything from the structure of the business to raising capital, and they put us in front of investors.”

In fact, the incubator program was instrumental in helping the startup get its first two rounds of funding from investors, he says.

JES has since moved to its own corporate office. But as part of the incubator program, the startup initially worked out of 1871, a 50,000-square-foot co-working space for startups. “It was an incredible space, where every interaction you have leads to another opportunity,” Hill says. “It was full of bright entrepreneurs making things happen.”

CDW, a sponsor of Impact Engine and 1871, was introduced to JES executives while the startup was going through the incubator program.

“CDW has made a commitment to the startup community. By sponsoring Impact Engine, we are able to help companies like JES move forward and hopefully change the world,” says CDW Executive Account Manager Edgar Mendoza.

Jail Education Solutions at a Glance

Headquarters: Chicago
Full-time Employees: 13
IT Staff: 3
Description: Jail Education Solutions provides a tablet-based learning platform, called Edovo, that allows inmates to educate themselves at their own pace. Founded in 2013, the startup offers a broad range of educational content, including K–12 and introductory college courses and vocational training. JES recently won a contract to pilot Edovo in Philadelphia’s correctional system and aims to roll out the service to several other facilities.