Banks aren’t in business for 120 years without doing a lot of things right. Today, “doing things right” for the Needham Bank IT team means deploying the right mix of technologies to foster business growth without growing infrastructure. Doing that requires working closely with the business side, says James Gordon, senior vice president of IT.

The Needham, Mass.-based midsized bank offers a high-tech yet high-touch customer experience, which differentiates the bank from other financial institutions, Gordon says. That’s been the bank’s mission since he came on board in 2007, he says. To ensure the bank enjoys solid growth without abandoning the personalized touch that’s made it a community fixture for more than a century, the IT staff strives to support fundamental banking practices while adopting game-changing technologies where and when they make sense.

Through the past seven years, Needham Bank, which manages $1.5 billion in assets currently, has grown 30 percent annually, more than tripling its number of employees to 200, while hiring just three additional IT workers. The bank now operates six branches, including a new loan center in its main office and an enhanced operations center, and has three more branches under construction.

How does Needham Bank sustain growth and support an expanding employee base with only a slight uptick in IT staffing? By taking advantage of mobile technologies, virtualization and the expertise of IT services specialists, Gordon says. Senior management is intent on creating the “bank of the future” — but not at the expense of the present: “The trick in banking is to plan for the future, embrace the present and be cognizant of the past.”

A strategic technology partner plays a pivotal role as well, Gordon says. He works closely with CDW for all hardware and software purchases, a relationship that began in 2003 when he was working for another bank.

Since joining Needham Bank, he says he has continued to turn to CDW for advice and planning pointers on implementing numerous technologies, from mobile device management and next-generation switches to server, client and application virtualization, as well as for virtual licensing services. 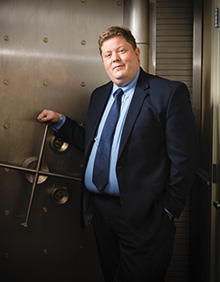 “CDW supports us with licensing even though they’ve already sold us the products, which is one of the value-adds that made me choose them,” Gordon says. “My account manager understands that I need somebody who will stand by me and help me through the complexities of virtual software licensing and audits.”

This kind of relationship, he adds, requires complete honesty and trust between a customer and its vendor partner. He tells CDW exactly what’s happening on the change management front so its team can work with his to ensure licensing compliance. “If I tell them we hired five new people, they tell me if I need to buy more Office or Exchange licenses, for example, and the most cost-effective way to buy them.”

Money Management on the Move

Needham Bank’s IT strategy is built on continuously improving front- and back-office tools, optimizing its infrastructure and streamlining service delivery channels. On the front end, the aim is to give customers a choice in how they do their banking, whether it’s via mobile apps, online or in person at a branch. But there’s more to it than simply building the technical foundation and offering customers tools for self-service financial management, Gordon says. Why? Because tools deliver on their potential only when an institution fully emphasizes the human component of banking, he says.

Whether customers dive in head first or want assistance to gain confidence, mobile and online banking are definitely gaining traction. Needham Bank offers a full-service mobile banking app, which lets customers do online with their mobile devices just about everything they can do at a branch.

Recognizing early on the importance of mobility, both to customers and to employees, the IT team took stock of the different mobile devices used in-house. They wanted to standardize on one platform to cut support costs and improve security, which they did when the Apple iPhone 3G was released in 2008.

When mobile device management (MDM) technology providers began integrating their solutions in 2011 with the new iOS 4, Needham Bank deployed MobileIron’s MDM product. This was a major step forward on the security front; the IT team could now automatically profile employee devices — including the iPad devices they now managed — and the apps running on them.

The IT team took yet another step forward in 2013 when it deployed a cloud-based mobile content management solution in a private cloud. IT manages mobile content through the bank’s NB Exchange portal, where employees access content-sharing and collaboration tools. IT staff can also set up customer portals, used primarily by banking customers who want to securely upload documents and centrally manage multiple loans and financial assets.

“We’re a big believer in remote access, but we wanted technology that gave us strong security controls while still allowing employees to be highly productive,” Gordon says. “They need to be able to meet with customers, work on deals, sell new products and process loan applications, whether they’re in the office or anywhere else.”

Percentage of bankers who plan to increase the number of brick-and-mortar branches over the next 12 to 18 months, with a focus on reduced footprint, enhanced technologies and unique customer experiences

Virtual Bank of the Future

Gordon and his team continuously review front- and back-end technologies that reduce the cost of IT services delivery; create a more agile, energy-efficient data center infrastructure; and protect data.

“When financial services professionals talk about the bank of the future, they talk about the front of the house but tend to overlook the back of the house,” he says. “We need to take into account not just what the customer sees but also the back-end infrastructure that supports what the customer sees. It goes far beyond installing a few plasma screens on the wall and running slideshows highlighting our services.”

To simplify the infrastructure that supports bank activities and position IT to respond to continuing growth, Gordon and his team started virtualizing Needham Bank’s servers in early 2009. The bank now maintains three physical servers; the rest are VMware virtual machines (VMs). The bank upgrades its hardware every 18 months to take advantage of CPU performance improvements, moving older hardware to the bank’s disaster recovery site. As part of its DR strategy, Needham Bank replicates critical servers over high-speed fiber to its offsite data center, as well as backing them up to Linear Tape-Open Version 6 drives for offsite storage. For fast restoration in the event of a disruption, such as a VM crash, the bank relies on Veeam local backup of its HP storage server. Veeam maintains up to 90 snapshots of the production environment so that the IT team can recover locally, based on its recovery point objectives.

Needham Bank also migrated from traditional desktops to virtualized VMware View desktops using HP T-410 and LG Cloud V-Series thin clients. That allows the IT team to create a standard gold image of a Windows 7 desktop and core applications, as well as centrally manage all clients.

For users who need special applications, Gordon’s staff uses VMware ThinApp to virtualize applications and deliver them to appropriate desktops without creating multiple gold images for different users and departments.

“Virtualization eliminates what I call ‘desktop warfare,’ where you need a team of people dedicated to battling desktops that have multiple hardware versions, operating systems and applications day after day,” he says.

With virtual desktops, IT also eliminates the time-consuming task of installing and upgrading applications on multiple platforms. “If we need to upgrade Firefox, for instance, we upgrade it once in our virtual environment and cascade it through the entire bank with a couple of mouse clicks.”

The bank is piloting a small virtual storage area network using VMware and flash cache cards from Fusion-io. Each branch uses only a small amount of flash cache to ensure fast response times for teller desktops. As part of its branch expansion and infrastructure overhaul, the IT team has upgraded to robust HP PoE switches at the bank’s main and branch locations. Each switch can support multiple virtual LANs, eliminating the need for several older switches and significantly cutting costs, Gordon says. That helps Needham Bank to better support current applications and future-proof its network.

The VDI initiative has already eliminated the need to run multiple servers in branch offices.

“The HP T-410s require only a PoE connection, so we just plug them into the new switch, and they draw their power from there,” Gordon says. “We reduce wiring, power consumption and the overall branch footprint.” The building architects he’s worked with on expansions are shocked when he tells them he doesn’t need a 10-by-10-foot server room for equipment at each new location — just a cabinet or a drawer where they can install a switch, a router and a few networking components.

VM licensing models — whether per-server, per-VM or per-core — can make compliance a challenge. That’s why Gordon says he partners with CDW for VMware licensing services.

“When I’m notified about a licensing audit, my CDW account manager is on the phone with me every step of the way,” Gordon says. “If IT leaders in a growth business aren’t having at least a monthly call with their rep about licensing, they’re not doing things right.”

The team is always thinking ahead, Gordon says, considering next moves that will best serve the business: “Whatever’s going on, we never stay stagnant. We see ourselves as the new standard in community banking.”

The Face of Finance Today

Banks have to remember that their customer base isn’t just “Generation Mobile,” says James Gordon, senior vice president of IT at Needham Bank.

The banking business serves a diverse demographic with people who have varied financial preferences, security concerns and tech skills. There’s money at stake, and neither customers nor their banks take that lightly.

“Mobile and online banking tools are disruptive technologies, and the industry must react accordingly,” Gordon says. “The number and kinds of services that can be offered over a variety of channels have changed the role branches play.”

For Needham Bank, headquartered in Needham, Mass., the branch of the future is less a transaction center where customers deposit or cash checks and more a service center where they have the opportunity to spend productive time with customer reps and loan officers. The bank is working hard to ensure customers can access all of its services across any channel they choose.

“Some bank customers are pioneers, downloading thousands of apps to their mobile devices and exploring which solves which problem,” Gordon says. “But when it comes to their money, the majority of people don’t want to be pioneers.”

They want to come into a branch and know somebody will work with them to show them how they can bank more efficiently; how they can use mobile check deposit or move money using a mobile device; or how to send person-to-person payments, he says.

At a Glance: Needham Bank

Brief History: Founded in 1892, Needham Bank manages $1.5 billion in assets. It has six branches, with three more under construction, throughout Massachusetts.