Many NFL teams take IT security seriously, and the Denver Broncos are no exception.

Russ Trainor, vice president of IT for the Broncos, says the team plans to deploy Webroot anti-virus and anti-malware software on all new smartphones and tablets for the business staff. Trainor says the Broncos have used Webroot security software on business-side desktops and notebooks for about two years.

“Webroot also gives us [mobile device management] functions so we can wipe devices if they are lost or stolen, as well as locate the devices,” Trainor says, adding that MDM features in Webroot also enable the IT staff to enforce passwords and lock the phones directly.

Next year, the team will extend the Webroot rollout to remaining staff, including about 120 players and coaches. “We don’t like to make too many changes in the middle of the season, so we’ll stick with what we’ve got for now.”

Chris Silva, a Gartner research director, says software makers have a done a lot of work to tie together their security offerings.

“When organizations go with an existing security vendor or adopt a bundled suite of mobile management tools, they may get preferential pricing or receive baseline MDM or mobile application management features at little or no cost,” he says.

Pen-Cal’s IT staff supports about 25 iPhones and iPad devices with encrypted cloud storage and Microsoft Exchange’s ActiveSync capability. “All emails are encrypted by the cloud service, and we can do remote wipes on lost or stolen devices with ActiveSync,” Chase explains. 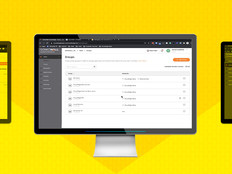