Any trial lawyer knows the telephone is an essential tool of the trade.

At law firm Bonner Kiernan Trebach & Crociata LLP — which had been relying on an aging collection of private branch exchange phone systems in its East Coast offices for more than 10 years — attorneys knew it was time for a change. Desktop phones running through a central PBX began to feel like quaint artifacts from a bygone era.

The systems were state of the art when they were installed, but the world of telephony had evolved quickly since that time. While some of the more seasoned attorneys at the firm were initially hesitant to drastically change anything so fundamental to their work, the firm’s younger partners and associates expected their phones to include modern features such as click-to-dial, the ability to easily forward or hold calls, email alerts for voicemail messages, and find me/follow me features.

“We didn’t want to move the old phone system and all those phones to the new location,” says Dennis Wakeman, Bonner Kiernan’s information systems manager.

Not only would moving the system prove to be a huge task, it also would be a waste of time and energy if he upgraded the system soon afterward. The move became his de facto deadline for making a decision on a new system, he says.

“I initially considered installing an in-house server to run a Voice over IP phone system,” says Wakeman, who had deployed a similar system at a previous job. “But I’m the entire IT department here.”

As he remembered how much time and effort went into installing, supporting, backing up and maintaining that VoIP system, he decided there wasn’t room on his plate for such a herculean task: “I was afraid it would be a painful amount of work.”

While mulling the no-longer-avoidable upgrade in Philadelphia, Wakeman explored his options. He put in a call to CDW to consult with someone who is familiar with the fast-changing marketplace. His account manager asked a few questions about the equipment his firm was using, the size of his firm (130 people in nine locations), his IT staff (one), and the technical ability of the firm’s lawyers. CDW, in turn, called in one of their subject-area specialists.

“For an in-house VoIP system, the firm would have had to write a large check for the initial capital expense,” Ludwig says. “But with a hosted system, the firm is charged on a per-seat basis. Knowing exactly how much it would cost per employee, per month, was very attractive as they planned to roll it out to new offices.”

From there, it was a matter of which hosted system to recommend. CDW works with several partners, and Ludwig was able to help Wakeman narrow his choices as he learned more about the firm’s particulars. Compatibility with existing handsets can be a concern, but that wasn’t a problem at Bonner Kiernan, where new handsets were in order. Ultimately, as Ludwig saw it, for Wakeman and the firm’s partners, the decision came down to comfort level. “I wanted Bonner Kiernan to be happy for a long time with the solution they chose. CDW has had a long relationship with ShoreTel Sky, and I knew Bonner Kiernan would be happy with that solution,” Ludwig says. 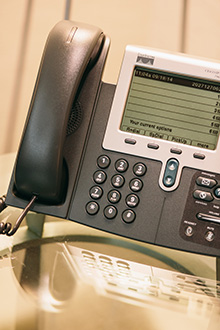 "Once I decided to start an office rollout, it took ShoreTel Sky only about six weeks to get everything done.”
— Dennis Wakeman, Information Systems Manager at Bonner Kiernan

A fully hosted solution solved the issue of how to support a phone system without adding IT staff, but Wakeman says the cost was attractive as well because it proved to be no more than what the firm already was spending on service and support for its old PBX system. Ludwig also put Wakeman in touch with other law firms that use the ShoreTel Sky product, to discover for himself what their experience has been.

Moving Forward with the Plan

Wakeman planned to roll out the Philadelphia office system first, as a way to simplify the move and allow him to test out everything. If everyone was happy with the solution, he planned to tackle the other offices as time allowed.

ShoreTel Sky contacted Bonner Kiernan’s telephone company on the firm’s behalf, ordered T1 lines to be installed, placed a port order to ensure the long list of staffers’ existing phone numbers would be moved to ShoreTel Sky, and set up the hosting system on its own servers. The installation went off without a hitch.

“It was very easy,” Wakeman says. “I installed all of it myself, and ShoreTel Sky performed the back-end work. All I had to do was hang a router, install a switch and hand out new phones to staff.”

Ludwig says that, if needed, ShoreTel Sky technicians can perform installations, “but IT managers typically choose that option only to avoid having to fly to a location to do it themselves.”

Because Wakeman planned to be at the Philadelphia location for the installation, ShoreTel Sky performed a “tele-install,” during which a technician got on the phone and walked Wakeman through the full setup. Bonner Kiernan has since rolled out the same solution in four of its nine locations.

“The switch for all four locations took about 18 months,” he says. “Once I decided to start an office rollout, it took ShoreTel Sky only about six weeks to get everything done.”

“I’m very glad we went this route” instead of choosing to host his own VoIP system, Wakeman adds. The option would have found him performing all of the data backups in each of the firm’s locations by himself.

When or if hardware failed, Wakeman says he also would have been on the hook to perform the maintenance to get it up and running again.

“We could never begin to match the redundancy of data backup that ShoreTel Sky gives us,” he says. With the new solution, software upgrades, support questions from staff and server maintenance are all left to ShoreTel Sky.

The firm’s attorneys and support teams are happy with the solution as well, Wakeman reports. The skeptical attorneys who were once hesitant to adopt a new system are pleased, because unless they want to use any of the new features, it isn’t very different from what they were accustomed to using before.

“If they don’t know how to do something, there is a question mark right on the phone,” Wakeman says. “They can tap that, and a ShoreTel Sky support person comes on to help.”

Some attorneys still call Wakeman out of habit, he says, but having a system expert available at the touch of a button offers the firm a backup if he can’t be reached immediately.

A Solution That Creates Happy and Productive Teams

“It was definitely time for a change,” says Alexander H. Gillespie, special counsel in the firm’s New Jersey office. “For me, the transition was a nonissue.”

Gillespie reports that he appreciates all of the new features offered by the solution, and that some of them have enhanced his work in unexpected ways.

He frequently uses a web browser plug-in that allows him to select from his contacts and phone numbers right on his computer screen. The tool also recognizes anything that looks like a phone number on a web page itself. “I just click on it and it dials, and then my phone rings to let me know the call went through,” he says. 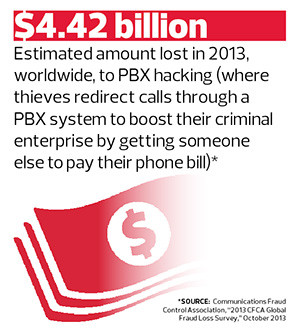 While the feature is convenient, it also eliminates a point of work friction Gillespie says he never noticed before: “It lets me keep my mind focused on what I’m doing on the screen instead of taking my attention away to look at the number and dial the phone.”

Gillespie and many of the other attorneys in the firm who often are away from their desks litigating also appreciate receiving voicemail messages not just through their phones, but also through email messages with WAV file attachments. Knowing immediately that a client is trying to reach him also is important, he says.

“I receive a message within minutes of the call, so if I’m in court, I can see that the call came in. I don’t have to remember to call the voicemail system for my messages,” he says. The solution also offers better record keeping for attorney-client communication. “When I’m done with a message, I put it into the case file to document exactly what someone said,” Gillespie says.

Because the new system did not require a capital outlay or increase in costs, Wakeman says he hasn’t stopped to calculate a return on investment. Hearing from attorneys who say the system makes work easier for them — and helps them capture precious billable hours — tells him the solution is earning its keep.

“It is much easier to remember calls I need to bill for when I can see those voicemail messages in the client file,” Gillespie reports.

Wakeman may not have thought much about the long-term implications of calling CDW to help him with his decision. He wanted to consult with an expert who knew the competitive market of this particular technology and could guide him to the right solution. His call to CDW bought not only Ludwig’s particular knowledge of the fast-changing landscape of business VoIP providers’ technology but also a knowledge of the fiscal health of the entire realm and the players in it: the products, the people behind them, their histories and each company’s ability to survive the whims and upsets of the technology sector.

“We have been doing business with the people at ShoreTel Sky since they were M5 Networks,” Ludwig says. “I work with all the same people today that I worked with at M5.” (ShoreTel acquired M5 for its cloud VoIP solution in 2012 and rebranded it as ShoreTel Sky.)

His knowledge of both the company and its products filtered out a great many potential mistakes Wakeman and the firm might have made had they explored the world of VoIP service providers on their own.

But what’s more central to CDW’s service is the partnership Bonner Kiernan entered into, Ludwig says:

“When they work with CDW, they are attached to a Fortune 500 company, and if they don’t get the response that they expect or deserve, they only need to place one call to us and we will escalate an issue on their behalf.”

BRIEF HISTORY: The East Coast law practice, founded in 1987, is devoted to defense litigation and counseling clients on issues that affect their potential for litigation. Bonner Kiernan attorneys have appeared in the courts of more than 35 states and territories.