With mere days left before VMworld 2014 kicks off in San Francisco, there’s been a swarm of activity on Twitter from eager attendees sharing their excitement — and stress — about the upcoming conference.

Now in its 11th year, VMworld’s U.S. conference promises to bring together more than 23,000 thought leaders, IT professionals and virtualization industry experts under one massive roof, the Moscone Center in San Francisco, from Aug. 24-28. If you haven’t already started packing for the trip, social media sites are buzzing with advice on what to bring, as well as where to hang out and where to charge your phones.

Here are just a few selections from the conversations happening on #VMworld and #VMworld2014.

A new podcast from SearchServerVirtualization gives attendees a pre-show breakdown to listen to while en route to the conference. The 35-minute recording features experts talking about the potential big announcements at this year's VMworld:

Two EMC employees showed their enthusiasm about the upcoming show in a YouTube video, in which they review their company's booth and session highlights:

But not everyone had the patience to wait for this year's conference to begin:

The free VMworld 2014 app was released this month, offering several ways to connect with conference content through your smartphone or tablet. The app can be downloaded for iOS on the iTunes App Store or for Android devices through Google Play.

The conference can be particularly stressful for attendees who have to lug around heavy bags between sessions. Photographers and cameramen are being encouraged by those with conference experience to streamline their equipment to the bare essentials, but that’s good advice for anyone who’s trying to decide what to pack:

When packing, think twice about everything you bring & whether you'll actually use it. Dead weight sucks at #VMWorld #AdviceForVMWorld

How often do you need to charge your phone, tablet or notebook to make it through a full day? How about three days? When packing, consider how you plan to charge these devices while out and about at the conference. Charging stations can be hotly contested at the Moscone Center.

RT @Texiwill: #vmworld Bring a battery pack for your mobile devices or get one as swag. Expect to run out of juice! @VMworld < +1

As noted in a previous story on VMworld 2014, all conference sessions will be recorded and are available to all registered attendees. Sessions from past conferences dating back to 2004 are also available for download on the official VMworld website.

#AdviceForVMworld Sessions are recorded for later viewing. You'll see the value when you see how much awesome happens in the hang space.

#AdviceForVMworld has become the spot for experienced conference attendees to share their tips on how to survive the virtualization bonanza.

#AdviceForVMworld > So you don't get lost at #VMworld heres a map: http://t.co/KsDEPw6Dhw

Don't try to keep up with your inbox. Address what's critical & leave the rest for your return. Maximize your show time #AdviceForVMworld

RT @texiwill: #AdviceForVMworld expect to be jostled, bumped, etc. Take it as an opportunity to meet someone new. #VMworld 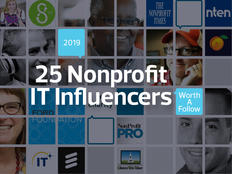