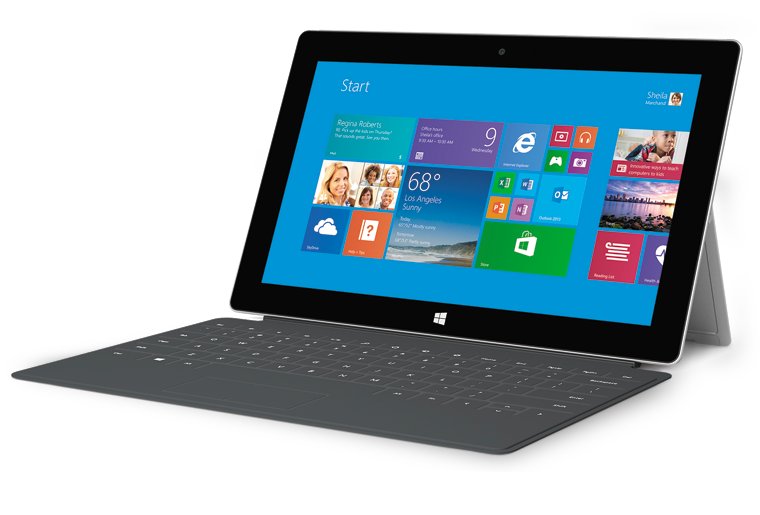 The Surface Pro 2 runs on a powerful Intel Core i5-4200U processor that’s even faster than the formidable Core i5-3317U chip found in the orginal Surface Pro.

The Surface Pro 2 also ships with a full version of Microsoft Windows 8.1 Pro. That means it is capable of running the same software that any Windows 8 desktop or notebook can run, while offering the same security features.

For instance, IT staff or a user can encrypt the entire contents of the Surface Pro 2’s storage drive using BitLocker, while administrators can easily gain full access to the device using traditional Windows admin tools. An on-screen prompt for a keypad sign-in adds a second layer of security to the standard-access password, providing built-in dual-factor authentication.

Although the Surface Pro 2’s black magnesium case is more rugged than most plastic-encased tablets, the unit still weighs in at a svelte 2 pounds.

Graphics on the 10.1-inch screen, manipulated with a finger or a bundled stylus pen, look amazing at a native 1920x1080 resolution. In addition, because the display is supported by an Intel HD Graphics 4400 chipset, the Surface Pro 2 is capable of running most software programs, regardless of graphical requirements.

Microsoft also engineered the Surface Pro 2 so the processor and graphics chipset would work together to improve battery life. It can last for up to eight hours on a single charge, depending on usage. When fully drained, it takes about two hours to charge the tablet back to full power. Users can monitor battery status in two easy-to-find places.

First, as with most notebooks, when the tablet boots up, the battery icon can be seen in the lower right corner of the screen. There is also a battery charm program that can be seen when waking the tablet from sleep mode. Like all charms on the Surface Pro, the battery charm can be manually opened by swiping a finger from the right edge toward the middle of the screen.

Given how power hungry apps are these days, the Surface Pro does quite well at managing battery life, but road warriors can squeeze a few more minutes of runtime out of their systems with a few tweaks.

One of the easiest tricks is to adjust the display’s brightness by opening the settings charm and selecting Screen. High brightness is a drain on battery power, so bumping brightness down will add to overall runtime without interfering with usage. Some people may think the screen is too bright to begin with, so turning this setting down is a double win for them.

Wi-Fi is also a big drain on power. Even if a user isn’t constantly online, the radio is active and draining power unless it is turned off. If there is no need to be online for a time, the radio can be disabled by opening the settings charm and sliding the Wi-Fi bar to the Off position.

Bluetooth drains less power from the device than Wi-Fi, but is still a problem. Like Wi-Fi, it can be disabled individually by sliding its bar to Off, giving users the option to shut one radio down while leaving the other active. Activating Airplane mode turns both radios off at the same time.

Another way to conserve battery life is by managing the environment. The Surface Pro is designed to operate between 32 and 95 degrees Fahrenheit. High temperatures will drain a battery quickly, and very high temperatures can permanently damage it. To get the most power efficiency out of the tablet, don’t leave it inside a hot car.

In addition to being a powerful tablet, the Surface Pro 2 can easily transform into a functional notebook with the addition of Microsoft’s optional Touch Cover keyboard and Wedge Touch wireless mouse. Simply deploy the kickstand in the back and snap the keyboard into the magnetic-grip port.