As a mobile enthusiast and technology writer, I’ve used a lot of smartphones and handheld devices over the past 15 years — way too many to count. This reality came into sharp focus when my wife and I cleaned out our home of a dozen years a couple of weeks ago. That’s when I uncovered close to twenty of the numerous handhelds to cross my path since 1999, when I bought my first personal digital assistant, a Palm V.

That particular PDA is still one of my favorite handhelds and, in my opinion, one of the most elegant mobile devices ever designed. I laid that device, along with its follow-up, the Palm Vx, and a number of others I found in a row on my driveway and took a picture. It may look like a motley crew of old devices, but that lineup of mobile devices tells us a lot about how the mobile market has changed over the past one and a half decades.

In addition to the Palm V and Vx, there were a few other Palm devices — such as the Tungsten C and the Palm Pre smartphone — as well as a number of smartphones from various manufacturers, including Nokia, Research In Motion (RIM), Samsung, Google and, of course, several generations of the iPhone, including the very first model.

There was even a smartwatch or two from Fossil as well as a few generations of the iPod (a number of hard drive–based models, iPod Touches and even an iPod nano). The operating systems represented ran the gamut, from the Palm OS and webOS to Windows Mobile to various flavors of Symbian and BlackBerry, as well as the earliest incarnations of today’s market leaders, iOS and Android.

The mobile world has changed dramatically since the release of all of these devices.

Palm, bought by HP in 2010, is little more than a sought-after patent portfolio recently acquired by Qualcomm. Nokia was once the undisputed king of smartphones, with a 50 percent share of the market; now owned by Microsoft, it seeks to reinvent itself as a Windows Phone maker. RIM, now called BlackBerry, is challenged as it attempts to find its place in the new mobile ecosystem.

Three years later, in 2010, Apple kick-started today’s thriving tablet market with the introduction of the iPad. Accounting for about 30 percent of the tablet market today, Apple is followed by Samsung, which has a little more than 20 percent of the market share for tablets. The iOS and Android OSs, of course, dominate here as they do among smartphones. 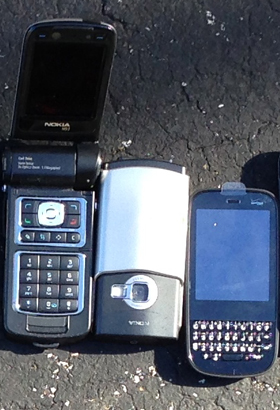 “Whatever place today’s mobile devices have in our connected future, there’s a good chance it won’t be what we expect it will be."

If there is one thing my mobile device museum tells us, it is that no matter how stable the mobile market may seem, it will surely change — often dramatically — when you least expect it to.

Palm set the modern handheld market in motion with its innovative PDAs and Treo smartphones complete with handwriting recognition. But when it came time to innovate in the face of competition from Google and Apple, Palm was left flat-footed. Sure, the webOS was elegant and more than a match for the iOS and Android, but it was too little, too late.

Nokia, meanwhile, didn’t take the threat from the newcomers seriously enough. After all, many of its smartphones had more features than the original Android and iPhone models. What it didn’t see coming was how those devices weren’t just about feature sets, but also about the way people used their phones. Apple’s innovative delivery mechanism for mobile applications, the iTunes App Store, and the dropping of the stylus in favor of the iPhone’s multitouch input sparked a sea change in user behavior that few saw coming.

Samsung, on the other hand, read the market correctly. It wholeheartedly adopted Android as the platform of choice for its mobile devices. And by releasing many more smartphones of different sizes and capabilities than Apple does per year, it has filled market niches (mostly less expensive, midrange and lower-end) that Cupertino ignores.

What’s Next for Mobile?

As the wearables market heats up, with many predicting that smartwatches will be the next frontier for mobile device innovation, it will be interesting to see how these companies adapt, innovate and compete. And with the Internet of Things — a new and developing ecosystem in which everything and anything can be networkable and connected — it will be exciting to see what roles smartphones and tablets will play.

Will smartphones and tablets become the command-and-control centers by which we manage our smart homes and wearable health monitors? It could happen, and would certainly be a natural extension of the current technology.

One thing I can say for sure is that whatever place today’s mobile devices have in our connected future, there’s a good chance it won’t be what we expect it will be.

What’s In Your Mobile Device Museum?

Increasingly, our mobile device histories are tied to our professional and work lives. For someone like me, born in the late 60s and coming of age in the 70s and 80s, the evolving product line goes something like this: portable tape recorders, transistor radios, handheld calculators, boom boxes, various portable compact disc players, PDAs, MP3 players, feature phones, smartphones and tablets. I can’t wait to see what role future mobile devices will play.

What old mobile devices do you have lying around at home or in the office, and what do they tell you about how you and your company have adopted mobile technology over the years? Let us know in the Comments section.