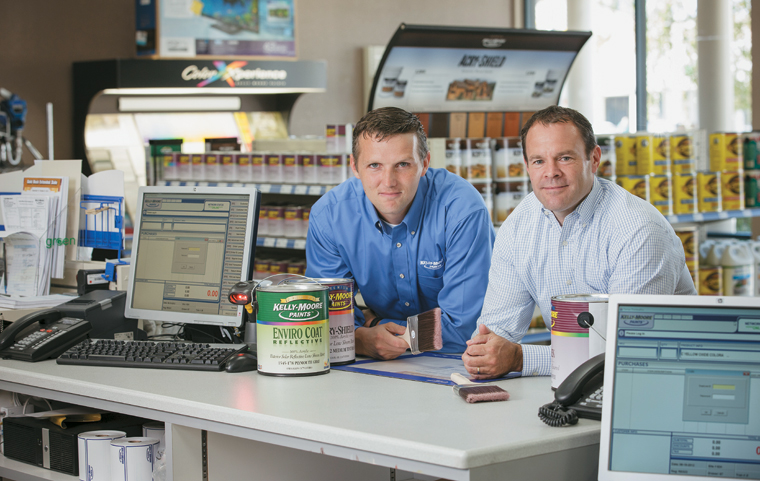 About two years ago, top managers at Kelly-Moore Paints knew they had to replace the point of sale (POS) systems at the company’s 144 stores.

The POS systems then in use had simply passed their prime, says Vojta Borovian, manager of Kelly-Moore’s IT Service Center and point man for the POS upgrade.

But the senior management team did not want to make matters worse by rushing out a replacement, given that the POS system so closely touches customers, says CIO Jim Maul. Planning behind the scenes took about a year. By the spring of 2012, Kelly-Moore had assembled a team that subsequently installed 547 new hardware systems in just two months and 11 days.

Each store now relies on two to eight new computerized setups at its registers. The new gear, which replaces systems that were up to 8 years old, includes the following products:

BUSINESS: Kelly-Moore Paints, one of the largest employee-owned paint companies in the United States, was one of the first major paint companies to offer recycled paints in a large selection of colors and decorative sheens. Roughly 90 percent of the company’s customers are professional contractors.

The team that executed the project included the Kelly-Moore IT staff, CDW and Avnet Integrated. The IT staff developed the system image, sent it over to CDW, which bundled the technology and shipped the systems to each store. Avnet technicians then installed the equipment.

“The point to remember is that this was primarily a hardware refresh,” Borovian says. “We didn’t change any of the applications, so the interface was very familiar to the store personnel. We designed every change tightly so we could execute fast and with minimal disruption to the customers and stores.”

Borovian says the results have been dramatic. Orders are processed 30 percent faster. And with the new printers, receipts are printed out 50 percent faster. The wireless scanners also make it easier for store employees to ring up products. No longer do they have to lift heavy cans of paint to scan them in.

Michael Black, vice president of store operations, says one important factor in the project’s success was that the installations took place without disrupting store operations. The tech team typically worked on installing the new POS equipment after 9 a.m., long after the early-morning rush to service contractors. Black says if any store had a rush later in the day, the installation team would let the cashiers take care of the customers and wait until the lines thinned before resuming work.

“It was critical that we minimize interruptions at the stores,” Black says. “In my 27 years with the company, I’ve never seen a project run so smoothly. We didn’t have a single complaint.”

Uptime, All the Time

The new hardware has resolved multiple issues that store managers had with the previous POS gear, says Mike Del Gallego, manager of one of Kelly-Moore’s Sacramento stores.

“There’s really nothing more embarrassing than having a customer come to a register and then having to ask them to move to another counter to process the order because the system is down,” Del Gallego says. “It creates a bad impression, not to mention the lost production time.”

Borovian’s team worked hard to ensure the new systems would satisfy both managers and users in the stores.

“All the products are covered on a five-year maintenance agreement, and we also redesigned the service delivery by providing a single point of contact for any issues,” he says. “All of the hardware is supported by a single group, and service calls are handled by the same group that did the original deployment.”

Brent Swift, a store manager in Tyler, Texas, says he has noticed a major change in the tech support. “If an issue comes up with one of the computers, it definitely gets handled a lot faster,” he says. 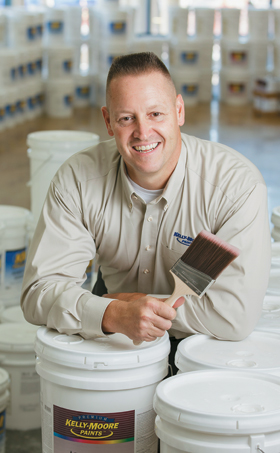 “In my 27 years with the company, I’ve never seen a project run so smoothly,” says Michael Black, Vice President of Store Operations for Kelly-Moore Paints.

The new speed and ease of the system also count for a lot. “Overall, the printing is much faster, we can look up information easier, and the scanners are great. We can walk around to the customer and scan the items in,” Swift says.

“Everything is greatly improved,” he says, adding that with the new scanners, the vast majority of products now ring automatically because correct data is stored in the POS system.

“It really helps us with our inventory management,” Borovian says.

Do the math: 144 stores in roughly 56 days. How did the paint retailer manage that installation pace with nary a hiccup? Through a detailed project design and change management process, says Project Manager Patti Stritmatter.

“This was a big project for us. But once the district and store managers understood that their concerns were going to be addressed, everything worked pretty smoothly,” Stritmatter says. “Most of them were very excited about this project. They all said they were willing to stay late, which they did, and come early, which they did. After all, I had the best possible news: They were going to get new hardware.”

When setting schedules for hardware installations at each store, Stritmatter would notify each store manager via e-mail seven days before the actual deployment. She then would follow up with a reminder and detailed instructions two days before.

Kelly-Moore was careful not to schedule delivery of the new POS systems until just prior to deployment. “The hardware showed up no more than a week ahead of time, and there was never a delay,” Stritmatter says.

To help carry out the breakneck installation schedule, CDW established a “buy and hold” agreement with Kelly-Moore. Under the program, CDW managed the inventory of new POS equipment, dispersing it to stores based on when they were slated for their upgrades, says Andrew Brotsky, a senior account manager for CDW.

“Kelly-Moore didn’t want the new hardware sitting around for a longer period of time since it could be damaged,” Brotsky says. “We timed it very well, usually three to five days before each install.”

Stritmatter acknowledges that she was a bit skeptical when Borovian first sketched out the logistics plan.

“I don’t like to put my name on a project unless I’m really sure it’s going to happen,” she says. “All I can say is I’m very pleased. I think given all the product that was shipped out, there were possibly just two or three broken items. Remember, this project didn’t happen only in California. We did this across seven states; it was a major logistics operation.”

To standardize the install process, Kelly-Moore tapped one of its PC/LAN technicians to be the go-live chief and to oversee the final tests before bringing the preconfigured systems online at each store.

The technician, Matt Hull, put his regular duties on hold for two months to focus exclusively on the POS project. Hull put the finishing touches on system configurations remotely from Kelly-Moore’s headquarters in San Carlos, Calif.

Hull says it took him about 15 minutes to set up a store-customized configuration on each system. Once a machine was ready, he would run a test transaction. Typically, Hull would have a store manager or cashier ring up a product, bill it and print a receipt. After that, assuming there were no issues, Hull would call an Avnet technician at the store and give him a closure number. The tech would then fax a final form to Kelly-Moore’s corporate headquarters, confirming that the register was ready to go.

To minimize the impact on store operations, registers were configured and confirmed one at a time so that at no time would any store find itself unable to serve customers as the installation proceeded. The onsite technicians were instructed not to move on and install the next system until the current one was certified for live use.

“I configured the majority of the registers,” Hull says. “It all went pretty smoothly because the image on the systems was very well thought out.”

Plan, Then Plan Some More

“We were very prepared for when we hit the field,” Maul says. During the year that the POS team spent preparing for the deployment, it tested the new systems in its lab, certified the hardware and firmware, and selected and integrated all the components. Through it all, CDW provided expert advice and help.

“As the technology manager for the business that was sponsoring this project, all I can say was that CDW brought a lot to the table,” Maul says. “It was really the whole package, assembling the hardware and peripherals, implementation services and support, and staging the project, including logistics out to the stores. They certainly met and exceeded all my expectations.”

Borovian agrees that CDW was vital to the project’s initial success and expects the partnership will continue to help the IT team maintain the systems for Kelly-Moore stores. “We can now be assured that we’ll have limited downtime on our store computers. If the systems do go down, we’re confident that we’ll have the support to get us back up and running quickly.”

Borovian says the experience with this project will help the company plan for the next refresh. “Now that we have the new systems in place, we’ll plan to do a refresh every five years,” he says, “and we want it to go even more smoothly next time.”