The three-time Super Bowl champions recently gave their stadium a wireless upgrade, according to CITEworld:

Fred Kirsch, the Publisher and VP of Content for the team, explains that the Patriots took about two months to install more than 300 wireless access points from Enterasys before the beginning of the 2012 season.

Placement of the access points is key, Kirsch told CITEworld. "With high density Wi-Fi, you cannot just throw up as many access points as you can. You're dealing with most people at 2.4mHz, and you're only allowed 3 channels, which means you get channel bleed, channel interference."

The team also partnered with Yinzcam to develop Patriot Game Day, a mobile app for in-stadium fans. The app, which according to Kirsch is used by about 10 percent of in-stadium fans, allows fans to view instant replay footage and weather alerts. The Patriots hope to bake more features into the app, including real-time traffic updates and remote concession-stand ordering.

While all of these bells and whistles being rolled out by the Patriots are impressive, Kirsch emphasizes that the goal of all of these social, mobile and wireless technologies is to drive a compelling, addictive fan experience.

He recently sat with Michael Krigsman and Vala Afshar, the hosts of CxO Talk, for a discussion of the evolution of the sports-fan experience.

"The number one thing fans say to us is we want to be closer to the team. We want to bridge the gap. Now, of course, the ultimate is shaking Tom Brady's hand and going to lunch with him, being his best friend. But short of that, it's any way that you can get them closer to the team, and social [media] is just phenomenal at that," Kirsch says.

"We want to combine [Big Data] with fan-affinity programs so that we can find out who you are, what do you like, how much do you engage with us. Not just in social, but throughout all our platforms. How often do you come to our web site? How often do you respond to a Facebook post? And then reward you for that engagement,” he says.

This kind of crowd-behavior analysis and insight is what the startup world is hard at work on. CrowdTwist, for example, is doing similar fan-affinity tracking and reward programs with the Miami Dolphins.

With a beckoning couch being the New England Patriots’ biggest competition, Kirsch is focused on understanding, meeting and exceeding the needs of Patriots fans. And they’re not alone. Other sports franchises like the Indianapolis Colts are figuring out how technology can best support their game-day experiences too.

The good news is that with the all of the available technology, the Patriots have significantly stronger tools to hone and shape the ultimate fan experience.

"To a degree, we've always tried to watch what people do in order to make their experience better. But now we have the ability to dig even deeper," Kirsch says. 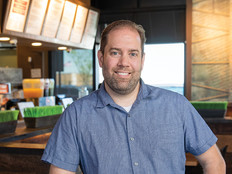