While some retailers have yet to embrace the Big Data revolution, companies like IBM are using the power of algorithms to forecast potential growth.

According to IBM’s Big Data-based retail forecast, the jewelry industry is poised to expand more than 11 percent in the second quarter this year. The company cites improved consumer confidence and low unemployment for the rebounding appetite for luxury items like jewelry.

To make its predictions, IBM relies on 22 years of historical retail data from the U.S. Census Bureau, which captures retail sales observations from more than 46,000 retailers every month. It then considers other factors, including consumer confidence, disposable income and unemployment data. Based on all of this data and the intelligence of its algorithms, IBM boasts that its forecasts have a 97 percent accuracy rate.

It’s a bold claim, but if IBM’s predictions turn out to be right, you can bet that more companies will turn to Big Data for sales forecasts in the future. 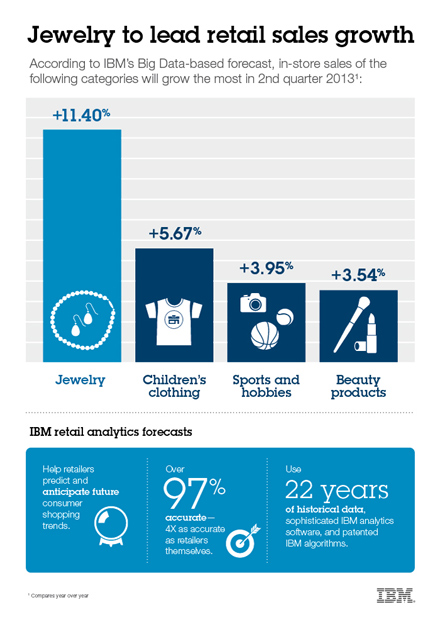 Sterling Jewelers has already tapped into IBM’s Big Data solutions to inform the relaunch of the online presence of its Kay Jewelers and Jared the Galleria of Jewelry brands, according to a post on IBM’s A Smarter Planet Blog. So far, the partnership with IBM has boosted bottom line growth, resulting in an increase of year-over-year online sales for both brands.

But improving sales isn’t the only thing Big Data can do for retailers. By tapping into data sets of gold, retailers can provide personalized shopping experiences with customer-centric recommendations and advice.

This holds true for brick-and-mortar retailers as well as e-commerce outlets. In fact, in a sign of the increased role of customer data in the purchasing cycle, eBay just announced the hiring of its first vice president of customer optimization and data, Zoher Karu.

In an official post on the company’s blog, Devin Wenig, head of eBay Marketplaces, said Karu’s role would be to "drive data-driven innovation, delivering a personalized and intuitive omnichannel shopping experience to customers around the world."

While we’re still in the early stages of Big Data’s impact on the retail industry, it’s not hard to see that more companies will rely on customer data to steer their businesses in the right direction.