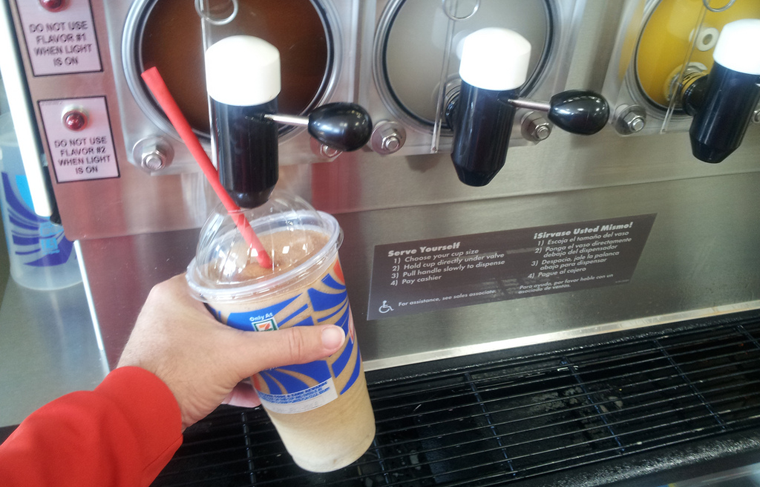 If big data is poised to rule everything around us, like everyone seems to think, can someone get to work on hooking up all of the Slurpee machines in 7-Elevens around the country so I can know whether the frozen treats are fully mixed and ready to serve before I walk into the store?

Because there’s nothing more frustrating or disappointing than walking in, heading over to the Slurpee machine and pulling that lever, only to get watery high-fructose corn syrup and dissatisfaction.

If the gripe sounds personal, it is. Let me explain.

About a week ago, my five-year-old son wanted me to buy him a Slurpee as a treat for good behavior at school. He got the elusive pink star for excellent behavior in his kindergarten class. How’s that for gamification?

So we headed over to our local 7-Eleven and grabbed our cups. Then I looked up at the Slurpee machine and realized that four out of the five flavors were still in that dreaded watery state, not yet ready to serve.

My frustration got the wheels in my head spinning and, since all anyone in business and technology wants to talk about these days is big data, I wondered: What if 7-Eleven hooked up its Slurpee machines with analytics software that monitored their status and then fed that information to a mobile app so customers could survey the 7-Elevens in their area and know ahead of time which flavors were available and whether they were ready to serve?

Having this information tracked and available to consumers before they walk in the door would reduce time wasted going from store to store to find one that had their favorite flavors ready to go.

So I decided to tweet my idea out to 7-Eleven to see whether anyone had ever thought of it:

Dear @7eleven, can you invent an app that lets me know me slurpee mixing status so I don't have to go from store to store? Thx

Lo and behold, someone handling the company’s 7-Eleven Cares account responded, saying my suggestion would be passed on to developers:

@ricktagious That is a great idea, thank you for sharing, we pass guest feedback along every day. -BK

Now, I’m sure that “BK” was just being polite when he (or she) responded, but on the off chance that BK really does pass my suggestion on to 7-Eleven’s development team, consider these compelling reasons to offer more analytics information to customers:

When it comes to food, the more we know, the better. Usually. And with analysts proclaiming that companies that ignore the big-data trend risk extinction, the pressure is on for organizations to know more about what they do, how they do it and why they do it.

So in the grand scheme of things, holding out for a future where I know that the Slurpee I seek is ready and within reach before I walk into the store isn’t too much to ask of big data, is it?