In my work consulting with Apple users, I see many iPhone and iPad home screens. Most of them, even those belonging to my clients with “type A” personalities, are cluttered with a sea of unneeded apps.

Finding a rarely used app becomes an exercise in patience: It can be hard to part with apps if you have a tiny inkling you might need it in some far-fetched hypothetical scenario.

Or maybe you just don’t want to feel like you wasted 99 cents. Don’t worry, deleting apps from your home screen doesn’t mean you lose access to the app — you can always re-download purchased apps in iTunes.

My app organization method tries to solve two problems that I see many smartphone users struggle with:

• The need to access some apps nearly every day, which can takes extra taps and swipes to get to if they're bured in folders

• An overabundance of apps, which results in useful or fun apps being hidden and forgotten on several pages of apps and folders

That’s why I had to draw a line in the sand: Two screens for all my apps — nothing more, nothing less. 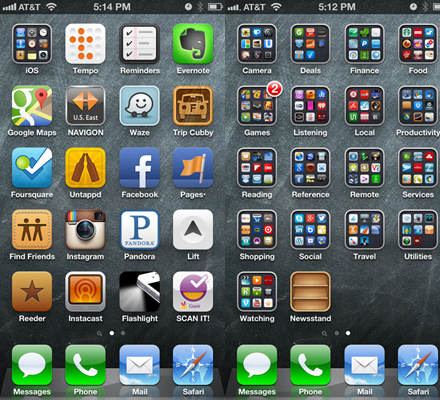 The first page is made up of apps that I use nearly every day. Think music, navigation, favorite social media apps and a few others. None of them are in folders, except for my iOS folder, which, for some reason, I am reluctant to move off my first page.

The second page is made up of folders of apps, named by function and organized alphabetically by folder name. Most people organize by content type (music, books, news, etc.), but I like to group apps by action (reading, listening, watching).

I often find myself in a situation where headphones are inappropriate, so I read instead. I open up my Reading folder and see my regular choices, such as the Kindle or AP Mobile apps. But I’m also reminded of apps I use less frequently, such as OverDrive Media Console, which allows me to borrow e-books from my local public library.

Here’s a breakdown of my folders on the second page:

Camera: Anything to do with editing or taking photos or videos.

Deals: Groupon and other deal sites.

Food: Anything to do with buying or making food or drink. Games: Angry Birds, Temple Run, etc.

Local: Things I use when I’m driving or walking. These apps help me find what I want (such as Yelp) or help me get where I’m going (such as transit apps).

Productivity: Apps that are rarely exciting but are often very useful.

Reading: Apps for reading books, articles or news. Reference: Any apps that I use to access data and databases.

Remote: I have too many utility apps to fit in my Utility folder. These apps are for remote control or remote access, such as VNC and SSH.

Services: We all do business with companies who have their own app. I put apps related to my rent, insurance, doctor and cell phone in this folder.

Shopping: Who doesn’t want to buy more things? This folder is for finding things to buy or for tracking items once they’ve shipped.

Social: I still haven’t figured out how to take full advantage of Twitter and Google+, but I want to. And I use them sometimes, so I stuff them away in here.

Travel: I don’t travel as much as I would like, but when I do, it’s really handy to have all of my travel apps here, logged in and ready to go.

Utilities: I keep my random utility apps in here, such as AirPort Utility or Speedtest.

So there you have it. Hopefully, my “two screens” commandment for parting the app seas will help users clear out the clutter and ease their scrolling fingers.