“If we’re going to teach hospitality, we have to preach hospitality,” says Mike Finnell, IT coordinator of The Restaurant School at Walnut Hill College in Philadelphia.
Home»Hardware

Mike Finnell has a straightforward approach to running technology programs at a culinary arts and hospitality college.

To do that, he works closely with college leaders, faculty and staff to integrate technology into every aspect of the student experience at the school, which offers four degrees in culinary and pastry arts, and restaurant and hotel management.

“The idea is to use technology to make everyone’s life easier,” Finnell says. “I want to make it so students aren’t working hard to find something. They’re simply trying to learn something.”

Using Samsung MagicInfo Pro software, the IT team and administrative staff can publish new content to the digital signs several times a day. MagicInfo Pro does not require any special bandwidth management because the updated content publishes to the displays only after a change is made — “as opposed to constantly streaming to them,” Finnell says.

Plans also are under way to deploy a touch-screen information kiosk that will display interactive maps, making it easier for visitors to find their way around the campus.

“The digital signs are really a fast and efficient way to disperse information,” says Valery Snisarenko, the school’s ­director of marketing. “They are ­everywhere.”

Digital Signage Is the Main Course

All of the general education classrooms have Epson projectors. Plus, all six teaching kitchens have Lenovo notebooks mounted on adjustable arms that tether to Epson overhead projectors. These units can display videos, websites and PowerPoint presentations, for instance, as an easier means of demonstration.

The technology makes a tremendous difference in the learning experience, says Tom Tirendi, a chef instructor and 1998 graduate of The Restaurant School at ­Walnut Hill College.

“When I was in school, we had access to the Internet, but we had to go to the library,” he says. “Now, we have computers with Internet access right in the kitchen.

“We can look up recipes on the fly, and I can display my PowerPoint presentations. It gives a lecture much more power. ­Students can either view the lecture on the projector screen or follow along on their tablets. Everything is right at their fingertips,” Tirendi says.

“The digital signs show prospective students who visit the campus that we are cutting-edge and modern,” Fuller says. “It keeps people in touch and shows our capabilities.”

A major reason for the school’s focus on using technology stems from the leadership of its president, Daniel Liberatoscioli, who’s always thinking up creative ways to deploy technology to make the campus hospitable to students and visitors alike, Snisarenko says.

A prime example: The coming use of displays for a spice and herb wall in the back hallway of the culinary building was his brainchild. Rather than let the high-traffic area serve solely as a route from class to class, Liberatoscioli suggested ­installing interactive kiosks and digital displays to make an effective and fun learning environment for students.

“I would have to say that the entire process of deploying the displays across campus has been much easier with his backing,” Snisarenko says. “Once people saw that he was such a strong advocate for the technology, just about everyone else got on board.” 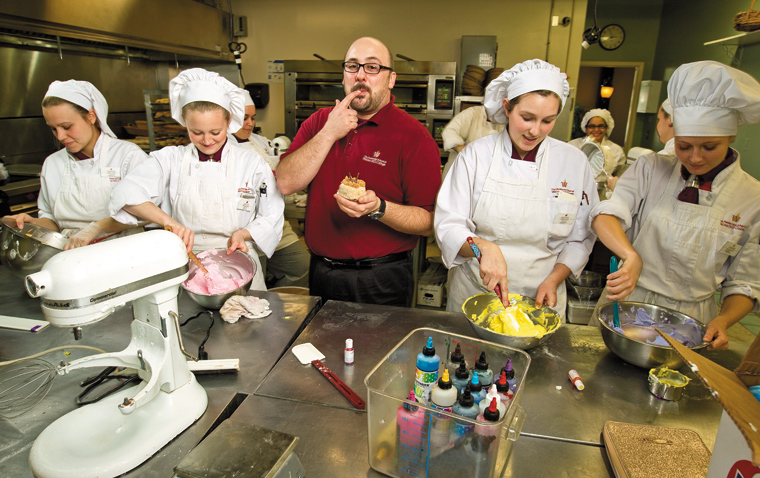 Integrating technology into the curriculum meshes well with the school’s overall approach to preparing students for work in the real world, IT Coordinator Mike Finnell says.
Credit: Bill Cramer

Video Technology Is the Secret Ingredient

Integrating technology into the curriculum meshes well with the school’s overall approach to preparing students for work in the real world, Finnell says.

To immerse its students in a realistic culinary environment, the school has four working restaurants and a pastry café that are open to the public. A walk through the school’s entrance at the Allison Mansion brings visitors to the pastry shop and the Great Chefs of Philadelphia restaurant, which features fine dining.

In the school’s atrium, a European-style piazza is home to the International Bistro, which serves world cuisine; the American Heartland, which offers steaks and fish; and finally, the Italian Trattoria.

“Working in the restaurants helps students get experience in the industry,” Finnell says. “We host a lot of events, weddings and private parties.”

The display technology plays an important role in helping the school and the students refine the many events with creative embellishments. For example, in the Great Chefs restaurant, four Samsung UE55 digital displays form a video wall that serves up content customized to each event.

Fuller calls the video wall a great feature. “It changes through the course of the meal and, depending on the event that night, might give people the sense that they are dining in London or Paris.”

Along with the video wall in the Great Chefs restaurant, the school has deployed digital signs mounted in picture frames throughout the other restaurants and in all the reception areas, creating a video art gallery.

“Our approach is very progressive,” Tirendi says. “We do meals for the public all week and have a great following in the neighborhood. Everyone here is dedicated to giving the next generation of chefs the tools and experiences they need to ­succeed.”

A Visual Recipe for Creativity

The digital signs spread throughout the campus at The Restaurant School at Walnut Hill College are an integral part of the school’s technology setup. When it completes its rollout this year, the school will have 30 Samsung digital signs and two Epson projectors supporting its various digital signage applications.

IT Coordinator Mike Finnell notes that his team sets strict on/off schedules for all the devices so that they’re powered up only when the campus or the restaurants are in operation.

Here’s a breakdown of the school’s digital displays:

Samsung UE55A large-format LCD (1): The configuration for this 55-inch unit is the same as for the video wall, except that it’s a single monitor instead of four linked together. This unit serves as a mock picture frame in the same restaurant as the video wall.

Epson PowerLite 1950 projector (2): The projectors display a slide show on two large, otherwise barren walls in the stairwells of the school’s culinary building.

Samsung SyncMaster ME32B (12): Five of these 32-inch digital signs will become a picture gallery in the main hall of Allison Mansion. Of the remaining seven, two will be used in kiosks and five in an installation at another of the school’s buildings.

Samsung SyncMaster ME32B (3): Two of these displays will be used for the school’s interactive spice and herb wall in the back hallway of the culinary building, and the third will be used as an information kiosk.