Spending on technology has broken out of the IT department’s silo. Where is most of it going? To the marketing department.

Gartner, Inc., a research and advisory company focused on IT, predicts that CMOs will outspend CIOs on technology by 2017. Now that technology is increasingly vital to marketing services, CMOs aren’t waiting for permission from anyone in IT to get what they want or need.

While everyone loves a rebel, the truth is that most CMOs would be better served by forming strategic partnerships with CIOs.

This collaboration between marketing and IT is a key component of what Citrix’s Ken Oestreich calls the “new” IT.

In a 2011 post on his blog, Oestreich describes a meeting he participated in while working at EMC. Oestreich was invited to the meeting as a marketer in order to help the company internally market its on-demand IT-as-a-service (ITaaS) operations model:

“The discussion - while well from over - I believe is a harbinger for the "new" IT, where IT provides value and competitive advantage to other lines-of-business, where it acts like a strategic partner/vendor, and competes for business. It's so much more than technology.

We agreed that another harbinger of change was when the CIO spends more time with the CMO, rather than with the CFO. And I can attest to being present to one such meeting.” 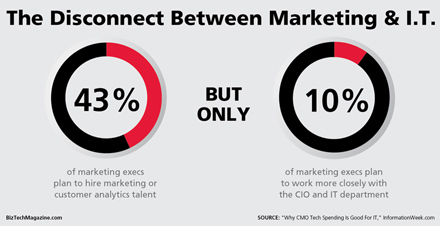 InformationWeek reported on a survey of 550 marketing execs conducted by the CMO Council which found that only 10 percent of marketers put a priority on improving collaboration with their IT departments this year. The low interest in engaging with IT contradicts the fact that 43 percent of these marketing execs said they plan to hire marketing or customer analytics talent.

Which basically means that the marketing department is operating without any formal guidance or leadership from the technical experts within their own company.

With this much “shadow IT” going on, it sounds like it’s time for some interdepartmental collaboration and communication.