The reports of the desktop PC’s death have been greatly exaggerated. The reason: all-in-one computers.

It’s true that sales of traditional desktop PCs have been steadily decreasing. In 2008, notebook computers surpassed PC sales, and last year, spending for ultrabooks, tablets and other form factors further contributed to the decline in shipments of the once-ubiquitous tower and mini-tower systems.

But at the same time, all-in-ones pointed to a future in which not all computing will be done using untethered devices.

“All-in-one PCs are expected to grow in popularity, accounting for 27 percent of worldwide desktop PC sales by 2016,” says Danielle Levitas, group vice president at the market research and analysis firm IDC. “In a recent commercial PC buyer study in the United States, IDC found that the purchase intent for all-in-ones was up across the range of small-to-large organizations.”

What’s more, demand for all-in-ones is growing across many vertical markets, including commercial enterprises, public-sector agencies and educational institutions.

This represents a significant change from the early days of all-in-ones, when the sleek units primarily attracted consumers drawn to the modern look and the installation ease of the fully integrated devices.

All-in-One PCs Are the Complete Package

Thanks to more powerful processors and a host of enterprise-ready features, such as preloaded business applications and security software, all-in-one systems are becoming the new standard for desktop computing in some core areas.

The beauty of the all-in-one design lies in the deft way that product designers have integrated the essential components of a modern desktop system within a compact package. Current bundles typically include large high-definition screens, often ranging from 18.5 to 23 inches.

Manufacturers, however, are quick to add that even larger screens are on the horizon. Along with the impressive large-screen displays, leading all-in-ones also come with full-size keyboards and some of the industry’s latest CPUs, hard drives and memory configurations.

The single-unit design requires only one cable to power everything, which eliminates the mounds of wiring that can create chaos when installing multicomponent systems.

Another hallmark of all-in-ones is their flexibility. IT managers can choose to implement them on pedestal stands to sit on desktops or take advantage of wall mounts for conference rooms or digital-signage applications. And the touch-screen capabilities provide an easy way for users to scroll through graphics or spreadsheet columns without having to use a mouse or keyboard.

Although all-in-ones aren’t portable in the same way notebook computers are, they’re not tied to a particular desktop as much as traditional computers are. “You can quickly repurpose an all-in-one for applications in different locations,” Babson says.

In another nod to flexibility, the back panels of the latest all-in-ones give IT managers quick access to internal components when it’s time to upgrade the hard drive or add memory capacity. In the past, the sealed cases made expansions all but impossible.

Rounding out the feature set of many enterprise-oriented all-in-ones are multimedia components. “All-in-ones marry up easily with Voice over IP [VoIP] because they typically include integrated HD cameras and speakers,” Babson points out. “All the video and audio components are there — versus having to connect everything through USB ports.”

Over a three-year life span, desktop systems generally cost from 34 to 68 percent less than notebooks. But the unique cost advantages that all-in-ones have over traditional desktops make the pricing for this form factor even more attractive, says Joe Marenin, strategic solutions manager and senior technologist at HP.

For example, all-in-one PCs consume about 18 percent less power than equivalent desktop systems; that represents savings of about $18 per unit per year in some cases. 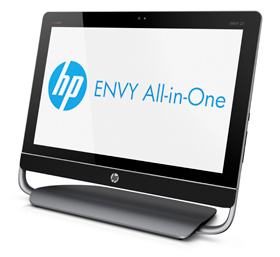 “Multiply that over hundreds or thousands of all-in-ones in an enterprise and there’s a substantial cost savings,” Marenin says.

The knock on the category in the past was the price that buyers had to pay for premium units compared with the cost of traditional desktops. But falling price points in recent months have put all-in-ones on par with desktops. This means IT buyers won’t face a price penalty when choosing the all-inclusive units.

Despite the attractive pricing, buyers don’t have to settle for less when it comes to computing power. “We are at a point today where there is no compromise in performance, manageability or security,” Marenin says.

Some of the latest all-in-ones on the market come equipped with chipsets from the Intel Core vPro processor family, which incorporates Intel HD Graphics. Alternatively, buyers can choose to add optional graphics cards if their users run demanding graphics applications.

HP recently introduced three commercial-grade all-in-ones that use the same images as some of the company’s traditional desktop models.

“Organizations can take that exact image from an existing desktop and put it on their all-in-one, and it will run perfectly,” Marenin adds. “It’s no longer about creating separate images for each type of product.”

Putting All-in-One PCs to Good Use 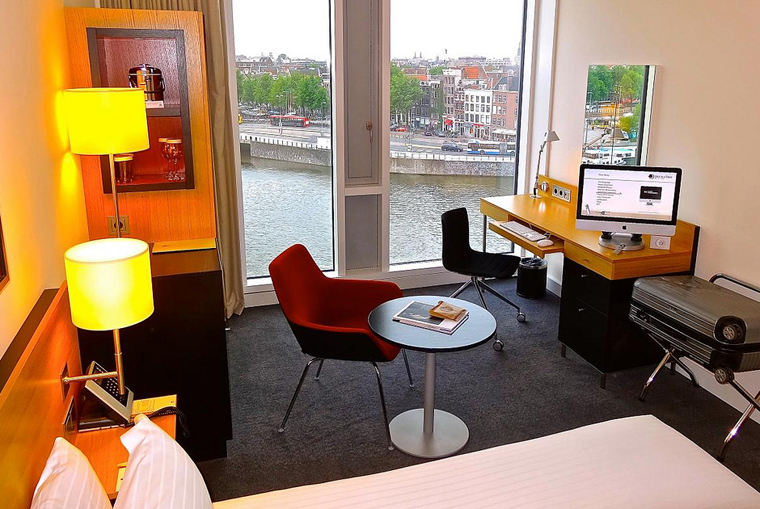 Credit: Ken Lee/Flickr
The DoubleTree by Hilton Hotel in Amsterdam offers guests use of an iMac during their stay.

Where do all of these capabilities fit best? “Any environment where space is at a premium and where pooling resources together makes sense,” says Rich Black, director of marketing at Acer.

Industry veterans point to a number of specific uses for all-in-ones:

Industry observers say that, unlike tower and mini-tower boxes, all-in-one designs are poised for big changes in the months ahead, in ways that will advance the features and functions as well as their stylish looks.

Most notably, some vendors plan to tout display panels with glass that stretches completely to the edges of the pedestal frame, without a border. In addition, in-plane switching, a technology used to enhance screen quality and viewing angles, could become mainstream for all-in-ones within a couple of years. Screens will also grow, with 25-inch models for general-purpose units becoming widely available in the next 12 to 18 months, says Babson.

Internally, all-in-ones may be outfitted with smaller components, such as 2.5-inch hard drives, which will enable even slimmer case designs.

Vendors are also hinting that Microsoft’s recent release of the Windows 8 operating system could have an impact on all-in-ones.

“The industry will be bringing out more products to leverage Windows 8, which will be one of the main tipping points to occur in the industry over the next few months,” says Leila-Axelle Robert, Acer’s senior business manager for commercial products in the United States. Especially attractive for all-in-one vendors will be the 10-finger multitouch capabilities of Windows 8.

Faster processors, larger screens, and more sophisticated multitouch capabilities all point to a bright future for this desktop form factor.

“We believe innovations like these will assure that all-in-ones will continue to evolve at a fast pace,” Babson says.