“Football can go on without technology, but it enhances the game experience for our fans and it enhances the play of our players,” says Ryan Fannin, the Indianapolis Colts’ Director of Football Information Systems.
Home»Mobility

The 2012 season marks a new era of football for the Indianapolis Colts. After its first losing season in a decade and an off-season of management and roster upheaval, the team made a fresh start with a new head coach, a new quarterback and new mobile technology to give it a competitive edge.

The 20-pound tomes have given way to 1.4-pound devices that include all the plays and allow players to watch game films at home instead of at the Colts’ practice facility.

“Pagano feels it’s a competitive advantage to give players all the information at their fingertips and for them to learn in a way they have grown accustomed to,” says Ryan Fannin, the Colts’ director of football information systems. “It’s not about pen and paper anymore. We are able to tie a video with a diagram of a play. It helps players learn, and it’s a huge benefit for the team.”

In March, the Colts’ IT department purchased 120 iPad devices for the team’s 90 players and 20 coaches, plus 10 spares in case of loss or damage. The team standardized on the third-generation, 64-­gigabyte Wi-Fi model.

NFL teams have rapidly adopted iPad devices over the past two years. The Baltimore Ravens and Tampa Bay Buccaneers started the trend by equipping their players with tablets in 2011; this year, about a dozen more teams have followed suit, including Indianapolis, the Green Bay Packers and the Miami Dolphins, according to the NFL. 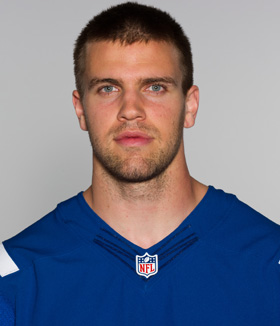 “We have a heavy-duty playbook, and now all that information is on the iPad. We don’t have to worry about carrying tons of paper,” says Colts tight end Coby Fleener.

Pagano witnessed the benefits of the iPad devices and digital playbooks firsthand while serving as Baltimore’s defensive coordinator in 2011. With the devices, coaches can more quickly and efficiently create and distribute playbooks for each week’s game. Instead of having coaching assistants stand over a copier for hours each week printing and binding paper playbooks, the coaches can electronically deliver the digital versions to players imme­diately with the press of a button.

For players, the biggest advantages are convenience and mobility. “It’s lightweight,” says Coby Fleener, a 24-year-old tight end for the Colts. “We have a heavy-duty playbook, and now all that information is on the iPad. We don’t have to worry about carrying tons of paper.”

The team also provides game films and video of their practices over streaming video, allowing players to review game and practice footage on their iPad devices. In past seasons, Colts players primarily watched game film using specialized computer equipment at team meeting rooms at the Colts’ practice facility. “It’s much easier,” Fleener says of the iPad ­devices. “You can watch from home.”

Providing players with anytime, anywhere access on the devices makes a big difference, Fannin says. When the Colts piloted tablets with several players in 2011, the team discovered that players spent more time studying their digital playbooks and viewing game film.

This spring, the Colts were in desperate need of a Wi-Fi upgrade. ­Fannin previously installed a few consumer-grade 802.11n and 802.11g wireless access points, which provided wireless coverage to just a small portion of the team’s headquarters and the practice facility in Indianapolis.

“We had a hodge-podge of access points,” recalls Fannin, who began working for the Colts 15 years ago as a scouting intern. “If a person needed wireless, we’d throw up an access point.”

In May, the Colts’ IT department turned to CDW to perform a site survey to determine how many APs were required for full coverage and where to place them.

First, a team of three CDW engineers beefed up the network bandwidth by ­replacing old equipment with three new switches: one Cisco Catalyst 3560-X Series switch and two Cisco Catalyst 2960 ­Series switches. These were needed to handle the influx of mobile devices that would connect to the wireless network and to supply Power over Ethernet. The PoE feature saved the team from having to install electrical outlets for each AP, says CDW Senior Engineer David Hillman. 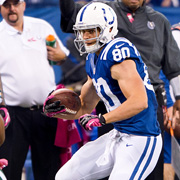 Learn more about how the Colts are making the in-game experience more interactive with its mobile app in our story, "Fan-Friendly Experience."

The Wi-Fi network is open to everyone, including players, coaches, employees, guests and the media. For security, the ­Wi-Fi network is separated into its own virtual LAN, so people using it are walled off from corporate network resources, Fannin says.

Since its installation, the wireless network has worked perfectly, providing ample bandwidth, Fannin says. “We haven’t touched the wireless since it was installed,” he says. “We’ve had no problems. It’s rock-solid.”

The Colts subscribed to AirWatch’s cloud-based mobile device management software, which allows the IT staff to ­enforce security policies such as password protection. And if the devices are lost or stolen, Fannin can remotely erase all the data.

In contrast, it’s much easier for paper playbooks to get into the wrong hands.

“With a paper playbook, you can take it to Kinko’s and make a copy of it,” ­Fannin says.

While coaches receive full access to iPad features, the Colts’ IT department uses ­AirWatch to lock down each player’s ­device. Players cannot surf the web, e-mail or download apps. When they log in, they are granted access to only two apps: the digital playbook app and the video app for watching game film or video of their practices.

“It’s treated as a playbook. Other teams may allow players to surf the Net during meetings, but to us, this is a playbook and not a toy,” Fannin says.

Coaches provide players with a full playbook in training camp, and then during the season, they break it down based on their game plan and create smaller playbooks for each week’s opponent.

Using Microsoft Office 2010 on notebook PCs to build the playbooks, the coaches create PDFs of the material and upload these to the playbook app maker’s servers. The coaches name their playbooks and pick an expiration date (generally the day of the game), so that once the game is completed, the playbooks are automatically erased from the players’ iPad devices, Fannin says. 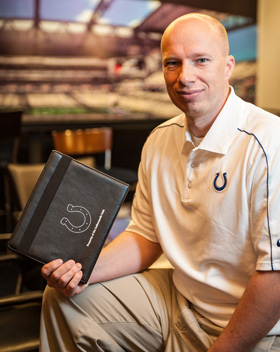 “[The iPad is] treated as a playbook. Other teams may allow players to surf the Net during meetings, but to us, this is a playbook and not a toy," says Ryan Fannin, Director of Football Information Systems for the Colts.

When players log in to their devices from the practice facility or from home, they can download the latest playbook from their coaches as well as daily practice schedules, travel itineraries, motivational notes and strategic tips from their position coaches, Fannin says. The digital playbook is more than a PDF. With the app, players can select categories of plays. Coaches can also attach a video to a specific play, so players can see the play in motion.

Fleener, a rookie from Stanford, says he mostly uses his iPad at home to study the playbook and review game film. But he also takes the device with him while traveling for road games, so he can study on the plane.

The tight end used paper playbooks in college, and notes that the digital version has its pros and cons. “The pros are its portability. The cons are that it’s hard to write and take notes,” Fleener says.

With the digital playbook app, players can highlight items, draw with their ­fingers and type notes on a virtual keyboard, but it’s not as natural as pen and paper, Fannin concedes.

The Colts used to spend only $15,000 a year on paper and toner to print paper playbooks, so the team isn’t saving money from its purchase of the iPad devices and network and Wi-Fi gear.

The return on investment, however, comes from increased productivity, better security of playbooks and the fact that players spend more time studying their playbooks and game film. The team has gained a competitive edge against other teams that are not using the devices, Fannin believes.

Pagano, who was diagnosed with leukemia three games into the regular season, took a leave of absence this fall for treatment. The team has continued to win games in his absence. The foundation that Pagano built — from coaching philosophy to the mobile technology — has made an impact, Fannin says.

“It’s important for us to be on the cutting edge of technology. We need any advantage we can get to stay ahead of other teams,” he says. “Players are looking at video and their playbooks more. It’s more than worth the expense to have all that information at their fingertips, any time of day.”

CDW to the Rescue

Ryan Fannin, the Colts’ director of football information systems, faced an emergency last summer: The team’s firewall died in the middle of the night, and he was about an hour’s drive away at training camp in Anderson, Ind.

Fannin called CDW Network Engineer Steve Rue, who jumped out of bed, commuted to his office to find a spare firewall and then drove to Colts’ headquarters to replace the faulty hardware. When workers arrived later in the morning, all network services and applications were working without a problem.

“I have a small staff of three people, so it’s hard to specialize when we’re all putting out fires,” Fannin says. “I had no doubt in my mind that the CDW network team that works with firewalls every day knows more about [them] than I do. I’m comfortable having that person work to protect our business.”

This year, CDW went onsite and helped the Colts upgrade its network and deploy and fine-tune a wireless network. CDW engineers performed an initial site survey to determine the placement of the access points, and then performed another survey once the installation was complete, says CDW Senior Engineer David Hillman. 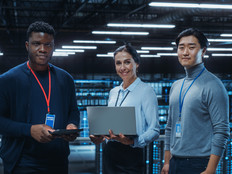