IT managers seeking to squeeze new benefits out of their virtualized data centers have an important new resource: a growing class of technologies known as data center fabrics.

Like the interlocking strands of woven cloth, data center fabric creates an integrated framework of servers, networking capabilities and flexible storage capacities. Data center fabrics help organizations more easily manage the pools of shared resources they create through virtualization. They not only reduce the need for physical gear but also eliminate many of the management and provisioning challenges associated with standalone IT capabilities common to traditional data centers.

These capabilities are reflected in Cisco’s Unified Computing System (UCS), where unified fabric is derived from high-performance servers, high-speed networking, storage access and virtualization. The result is an integrated, smart infrastructure that is physically distributed but centrally managed.

Data center fabrics can be especially useful today because they let IT administrators centrally manage physical, virtual and cloud environments, notes Zeus Kerravala, a member of the Yankee Group’s Affiliate Program, in his report “A Data Center Fabric Is Critical to a Next-Generation Unified Data Center.”

Automated management capabilities inherent in leading data center fabrics can free the IT staff from many routine maintenance tasks, so they can instead focus on strategic initiatives while also reducing investments in hardware, power and cooling, Kerravala says.

IT managers definitely are catching on. NAVIS, a fast-growing provider of reservation sales systems to hotels, resorts and rental-management companies, has adopted this strategy. With a 25 percent increase in business during each of the last four years, NAVIS found it needed an IT infrastructure that could easily scale computing power to meet demand spikes as well as quick overall growth.

“We are constantly having to bring up new computing resources to scale out our applications,” says NAVIS chief technology officer Mike Hollibaugh. “If we had to order a piece of equipment every time that happened, it would delay how quickly we could react and how quickly we could deploy a solution.”

Late last year, NAVIS updated its virtualized server environment with Cisco’s UCS, a converged system of blade and rack-mount servers that automates many server and network management functions. “Now, I can tell my network administrator, ‘I need a server,’ and in an hour I have it. It’s configured and delivering the resources we need,” Hollibaugh says.

Even as the national economy has struggled through a recession and volatile recovery over the past few years, NAVIS saw its business expand as companies in its target market sought ways to become more efficient and drive more revenues. “When the economy turned bad, a lot of companies wanted to streamline their operations. That’s exactly what our product is designed to help them do,” Hollibaugh points out.

IT managers can combine UCS blade and rack-mount servers into a single virtual blade chassis that is centrally managed yet physically distributed across multiple blade chassis, rack-mount servers and even racks and rows. This capability is delivered through Cisco fabric interconnects that provide redundant connectivity and a common management and networking interface. The result: a flexible pool of compute, network and storage resources that administrators can allocate on the fly.

UCS stores details about each server’s configuration and its network connectivity in a service profile that simplifies workload migrations between servers. This approach also aids server refreshes by speeding the movement of existing workloads from older servers to the UCS environment. IT administrators can manage spare capacity in a pool shared by all applications and allocated on demand, allowing IT managers to react quickly to evolving business needs. The unified fabric acts as a converged network backbone, carrying the traffic for all networks, including LANs and storage area networks, through low-latency, 10-Gigabit Ethernet connections. 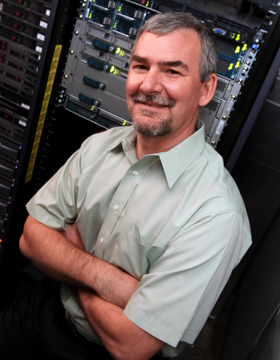 “Now, I can tell my network administrator, ‘I need a server,’ and in an hour I have it. It’s configured and delivering the resources we need,” says NAVIS CTO Mike Hollibaugh.

With unified fabric, data centers need only a single set of cables and a single protocol, significantly decreasing data center network costs. By collapsing cables into a single set, unified fabric supports concurrent connectivity to any type of storage array, including network- and direct-attached storage, iSCSI and SAN.

Cisco’s network virtualization represents a new level of sophistication that decouples physical and logical network connections from one another. From a deployment and management perspective, this unified approach allows systems managers to treat multiple Cisco UCS blade chassis and related servers as a single virtual blade chassis.

“This reduces costs in many different ways, including a marked decrease in cabling complexity and costs (and the overhead required to install and maintain all of those cables), network configuration cost savings and lower switching costs with lower switch port consumption,” says Steve Brasen, managing research director for Enterprise Management Associates. Fewer physical components also reduce power and cooling requirements.

NAVIS’s 130-person staff includes a team of 12 individuals who are responsible for IT operations, software development and telecommunications. This group works in a main corporate data center and a smaller ancillary facility in Bend, Ore., but the company is currently negotiating to move its IT operations to a larger third-party data center in Oregon, with direct access to long-distance carriers and broadband providers.

Hollibaugh says NAVIS chose UCS for a number of reasons, but at the top of the list was the ability to globally manage all of its computing devices from a central console. “If we need to easily move an instance of a computer from one data center to another, the global manager can take care of that,” he says. “That was a deciding factor.”

Other considerations included the close integration between UCS and NAVIS’s two EMC SAN arrays. In addition, the UCS VMware virtualization platform “is the state of the art for virtual machine management,” Hollibaugh says.

Sealing the deal was Cisco’s responsiveness to NAVIS’s needs. The company provided two technicians onsite to demo UCS and explain how to configure the solution. “No other company did that,” Hollibaugh says. He also gives high marks to CDW for helping NAVIS evaluate and deploy UCS.

“We’ve been a partner with CDW for about 10 years, and our CDW rep is an extension of my staff,” he says. “If there’s a technical issue that we just can’t figure out, we will reach out to him, and he always can get someone at CDW to help us.”

This level of support from both Cisco and CDW greatly enhanced the UCS implementation earlier this year. “It was one of our smoothest installations,” Hollibaugh says. “We sent our chief network administrator for training before we implemented UCS. If we had any technical issues, we got responses right away and resolved them. So from my point of view, it went very smoothly.”

In the months since it rolled out UCS, NAVIS has realized a range of important business benefits. But, without doubt, the biggest before-and-after difference is the speed with which the IT staff can deploy technology resources, Hollibaugh says. “Because of our growth, we’re bringing up new servers all the time. This has become the way we scale our applications to meet our customers’ needs.”

For example, a single physical server previously hosted the NAVIS website, but as the company grew, with a commensurate increase in site traffic, performance problems arose. NAVIS brought up four virtual web servers to handle the burgeoning traffic. “We quickly solved our performance problems without ordering any new equipment,” Hollibaugh notes.

The UCS platform also provides important support for legacy servers that power less-critical business applications. If a server running Microsoft Windows 2003 goes down, for instance, the IT staff can provision a replacement within an hour, using existing resources.

“We go into VMware running on UCS and say, ‘We want a Windows 2003 box with this many processors, this much RAM and this much disk space,’ and, voilà, we have it,” Hollibaugh says. In the past, NAVIS had to order a new physical box and spend time installing the old Windows version and associated storage and memory resources. A typical reprovisioning process could span four days.

The UCS platform also ensures better reliability than the previous virtualization technology. NAVIS’s data center hasn’t suffered any unplanned downtime since the migration. “When you move to a virtual environment, it’s even scarier if your systems go down,” Hollibaugh says. “It’s not four systems that are affected, it’s 24 that go down all at once. We haven’t had any problems like that with our Cisco gear. It’s worked flawlessly.”

Ultimately, the new capabilities make NAVIS much more efficient and more capable of reacting to changes in sales or services as new clients come on board, he says.

Hollibaugh hasn’t conducted a formal analysis of total cost of ownership (TCO) yet, but the results so far tell him UCS will contribute to long-term financial benefits, especially when NAVIS moves into its new data center.