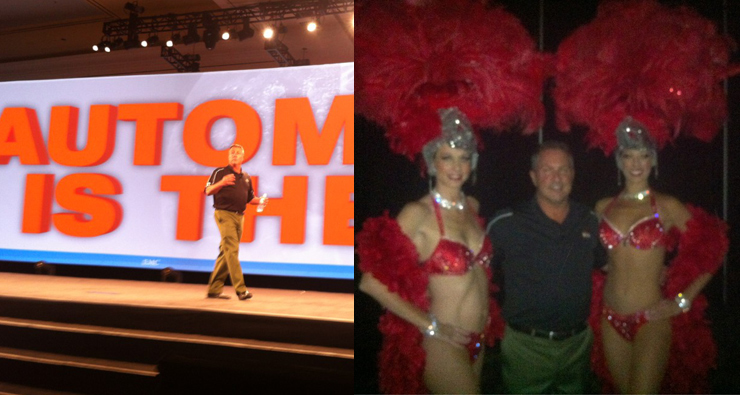 Photos: hansemc and stevedupe
ESG founder Steve Duplessie (left) talks about automation during his keynote. Before hitting the stage at EMC World in Las Vegas, Duplessie (right) is escorted by — what else — two decked-out Vegas showgirls.

Flash storage is as misunderstood as cloud computing and virtualization have been, says Steve Duplessie.

But one thing that no one who manages storage in the data center should misunderstand is that Flash adoption is inevitable, says the founder and analyst for Enterprise Strategy Group, who was the keynote speaker on the final day of EMC World 2012 in Las Vegas.

Flash “already exists in every layer of the computing stack, so stop worrying about it,” he says. Flash is solid-state storage — it’s just a new implementation of that technology, Duplessie points out.

The two real questions that data center managers should be asking are:

“Those are the only things to focus on,” Duplessie says.

The goal should be to get to as much cache Flash as possible. “I’m not a fan of a fixed device,” he says. Why? Because with a fixed device, a human becomes the single point of failure. “We’re terrible, generally, at automating because we don't trust the machine.”

In an ideal world, Flash would support 99.9 percent of the environment and only 0.1 percent would go to fixed. Fixed is expensive, but at that ratio, organizations can justify the costs for specific nonfluctuating data sets. Admittedly, most organizations can’t move immediately to that ratio, but that should be the aim.

Cache can allow higher effective utilization rates. When an organization opts for cache, it has already made the determination that it can’t pay for everything to travel around at the absolute fastest rate, Duplessie says.

And when it comes to managing any data, shared is better, he says. Virtualization has made organizations much better at adopting a shared approach to the IT infrastructure. That being said, it’s critical that a data center know its requirements and buy only what it needs to satisfy those requirements, Duplessie says.

The more solid-state devices, the better, because SSDs will run better, and those devices will get cheaper over time, he adds.

Organizations should buy Flash a little bit at a time. Start by implementing as the organization rolls out new requirements. “Don’t keep building these big stacks in case the worst happens,” Duplessie says.

Don’t get hung up on hardware, says Duplessie, because in the long run, Flash will be completely commoditized, just like DRAM.

Data orchestration is key to Flash, so pick tools that can best optimize and automate data management. That orchestration capability will be essential as long as there are tiers, which there will be for a while, Duplessie notes. Ultimately, IT managers have to think about how all of the pieces work within the evolving data center and how to integrate Flash into that environment, he says.

“The moral to this story is: Wherever you can put it, put it,” Duplessie says. “Flash is going everywhere, so adopt, accept and move on.”