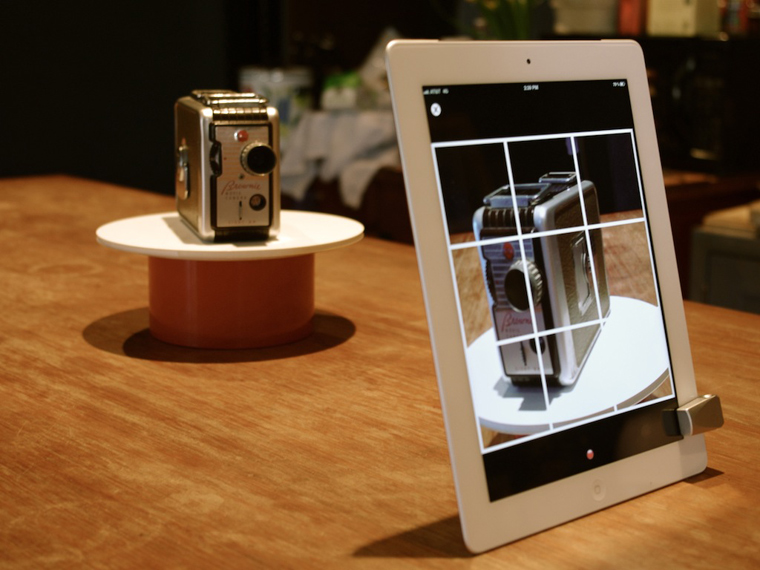 Things move at a blazingly fast pace in the startup world. After a successful launch at the South by Southwest festival in Austin, Texas, Arqball Spin’s Jason Lawrence and co-founder abhi shelat upped the ante with an attention-grabbing appearance at the DEMO Spring 2012 conference in Silicon Valley.

In the onstage demo — which saw the debut of the company’s iPad version of the mobile application — shelat made an intense case for 3D visualization going mainstream.

“There’s something rotten in the state of e-commerce. The tragedy is the lack of progress in the way we convey objects. The technology hasn’t fundamentally changed since the Renaissance,” shelat said. “On the Internet we see a front view, a side view and a top view and that’s it.”

The charming performance coincided with Arqball Spin’s Kickstarter campaign to make “3D For Everyone.”

In roughly two days, the company managed to raise $11,000, which will go toward manufacturing the stages that users need to produce the interactive displays, Lawrence says.

“The thing that keeps us so excited about this is that time and again, when we show people this technology, they immediately see something that's new and engaging. And they really want to know more about it,” Lawrence says.

Setting the Stage for 3D Spins

Lawrence and shelat founded the company in Charlottesville, Va., where the two work as computer science professors for the University of Virginia. Local investors and business people have been supportive of their efforts, Lawrence says, and there are no plans at present to migrate to the nation’s premier startup haven, Silicon Valley.

The focus remains on commercializing their stage prototype, which the company views as an integral part of producing high-quality “spins” — the 3D interactive displays captured and produced by the company’s mobile app.

“We thought long and hard about other ways of capturing spins, but to get high-quality spins out, you really need to start with high-quality data in,” Lawrence says. “[The stage] provides simple motion control which allows you to control a spin in a very predictable and repeatable way.”

3D for E-Commerce, Education and Beyond

One of the company’s newest features, unveiled at the DEMO conference, is the ability to annotate spins. This development came about in part from the funding the company received from the National Science Foundation’s Small Business Innovation Research (SBIR) program.

“You can identify a point on the object and write a little tag, and the algorithm attempts to figure out where that point goes as you activate the spin,” Lawrence says.

Annotated spins make perfect sense for education and digital textbooks, as well as e-commerce and fashion, he says. The demo of an ant spin, with its body parts labeled, shows how spins can be leveraged as a learning tool.

Publishing is another area in which spins might be useful. With a larger stage, humans can be captured and annotated with the technology, as shelat demonstrated in the DEMO presentation in which he used Lawrence and his skinny jeans as the model. But a much larger stage would be needed for capturing humans. So for now, human spins are limited to those who are willing to donate $1,500 or more to the Kickstarter campaign. “We're really trying to reach a [reasonable] price point, and we're trying to create technology that's simple to use and involves devices that are already in the hands of people that might want to use this,” Lawrence says.

The company has been testing the Arqball Spin app and prototype stage with a set of beta testers — a mix of consumers, commercial and education users — while it continues to refine its pricing model and usability.

As the recent $1 billion acquisition of Instagram by Facebook proves, there’s no limit to what can be achieved with a successful user experience. But unlike Instagram, which gained traction by simplifying the process of adding flourishes to static photography, Arqball’s product is a bit more complex because it requires a specialized stage.

Nonetheless, Lawrence believes there’s a community of users out there waiting to get their hands on this kind of technology.

“What you get from [3D visualizations] is so new and so compelling, that there will be a market that's willing to make those investments and create interactive content that currently is much more difficult and more expensive to make,” he says.