On any given day, it was typical for 20 to 30 callers to NuVo Technologies to hang up while on hold.

Garry Carty, IT specialist for the Hebron, Ky., producer of high-end audio equipment, knew it was a problem, and he was determined to fix it. “Telephone communication is the lifeline for the business,” he says. “But we were operating with basic functionality.”

Callers had no way of knowing where they were in the queue or how long their wait might be, he says, so they often gave up. Employees couldn’t tell who was calling or when call volumes were high or low. They had no warning when the queue backed up.

After researching Voice over IP options, Carty in June settled on a solution hosted by M5 Networks. Implementation went very smoothly, he says: Compared with an e-mail migration NuVo had gone through a few months earlier, “the difference was night and day.”

With VoIP, NuVo employees can now analyze call patterns and deliver far better customer service. Customers now know where they are in the queue and the length of their expected wait time. They’re given the option to leave a voicemail and, if they choose, transfer back to customer service.

With the new system — which includes 89 phones deployed across NuVo and its sister company, Hanser Music Group — employees can work from any location without callers knowing the difference. That’s made life easier on remote workers and ensures business continuity in case of an emergency.

Even during a snowstorm, employees can work from home, Carty says. The system has a voicemail-to-e-mail feature and an option for voicemail transcription to e-mail, which Carty says is extremely beneficial.

The system is fully integrated and easy to manage. That was critical to Carty, who is the sole IT person for the 38-employee business, which has nearly 1,000 dealers and 100 distributors in 54 countries.

Before moving to VoIP, incoming calls were juggled among the private branch exchange, voicemail server, on-hold music box and queue server. “All four of them were quite a chore to support,” recalls Carty. If one went down, he had to physically troubleshoot each one to find the source of the problem.

In addition to improved customer serv­ice, the reliability of the M5 system has been striking, he says. It has saved him about an hour a week in troubleshooting.

“It’s made us much better as a company going forward,” Carty adds, “and it’s given us that scalability that we’re going to need.”

At the Mennonite Mission Network, Grant Martin knew it was only a matter of time before MMN’s phone systems stopped working effectively, so he began researching replacements.

“One of the vendors actually said that he thought VoIP was a flash in the pan,” recalls Martin, infra­structure engineer at the organization’s Elkhart, Ind., office. “He was the first one we dropped.”

Others tried to convince him to update the PBXs at the four offices MMN supports with a hybrid PBX–VoIP system to cut down on upfront expenses. “But we didn’t want some cobbled-together system,” Martin says. “We wanted something that was going to flex and grow with the changing technology and our changing needs.”

Plus, he adds, “I’m a firm believer that in another five years, there won’t be any traditional PBX systems being sold.”

Martin and Carty are among a growing number of IT managers who believe that VoIP, which combines voice and data over the Internet, is quickly becoming the new standard in telecommunications.

There are plenty of realities fueling that view: PBX manufacturers that no longer support their systems; the savings enjoyed by those who have made the switch to VoIP; and an increasingly sophisticated array of tools and features that improve VoIP customer service and management.

When considering total cost of ownership, there’s a compelling case for VoIP, says Justin Jaffe, an IDC research manager tracking SMBs. As mobility continues to grow in importance and telecommunications and computer realms keep merging, the advantages of VoIP are becoming more apparent. “The writing is on the wall,” Jaffe says.

Man on a Mission

Mobility was a big draw for Martin when evaluating VoIP. MMN supports four offices and nearly 30 far-flung employees. It also must support staff as they travel around the globe. “We basically touch, in some way or another, every continent in the world,” Martin says.

VoIP offered a way to connect those offices and workers so they could operate together. If a client called into any of the offices, staff could transfer the caller to any employee, whether they were using an office phone down the hall, a computer in a home office or a cell phone on another continent.

That enhanced connectivity, plus the promise of serious cost savings, made the switch appealing. For Martin, the question soon became not if VoIP was right for MMN, but how to select the right provider. 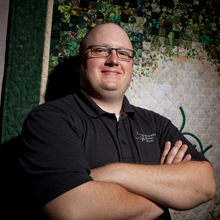 Credit: Stephen Hill
Mennonite Mission Network’s Grant Martin says VoIP lets him centrally manage comm services for four offices and nearly 30 employees. “We basically touch, in some way or another, every continent in the world.”

MMN’s CDW account representative thought ShoreTel would be a good fit from the start, but he gave Martin a list of providers to consider and worked with him as he whittled it down. “The whole project would have been much more difficult without CDW walking with us through the process,” Martin says.

ShoreTel then worked with MMN through six rounds of product configurations and quotes. When the 150-phone system was implemented in 2009, the glitch-free go-live took two hours, he says.

The benefits were immediately apparent: With the system’s central management console, Martin could add users and equipment and perform upgrades for all of the company’s locations without leaving his office. Other rewards have accrued as well. MMN’s annual long-distance phone bill has been $15,000 to $18,000 less since implementing the ShoreTel system. And while the upfront cost of moving to VoIP was significant (other than buildings, it was the largest purchase in the company’s history), MMN recouped the last of its investment this November — just 25 months after going live with the new system.

But the biggest advantage has been its reliability. “Our product is information,” Martin says, “and to not be available to people because our phone system died would have been devastating.”

Reliability and ease of management also appealed to Jay Owens, who turned a life-long hobby restoring early- and late-20th-century eyeglasses into a business. Owens’ RetroSpecs & Co. has retail locations in Los Angeles and Las Vegas, 28 employees and clients worldwide.

If Owens ever decides to expand his business, it’s now possible to connect the new office to the other locations without a hitch, thanks to the Cisco Unified Communications 300 Series system he purchased earlier this year.

He tested his expansion theory on a smaller scale when he purchased a Los Angeles warehouse a few months ago. “The easiest thing we did was move the phone system,” Owens says. “All you do is plug it in.”

The long-distance cost savings have been substantial, he says, and the system’s features have enhanced and simplified business operations. The auto-attendant feature alone has saved countless hours, Owens says. It directs callers to the departments they’re trying to reach, so Owens and his staff can focus on addressing customer service issues as opposed to spending time answering and transferring calls.

“It empowers small businesses because you can focus your attention on the customers,” Owens says of the system. “You’re saving money by making calls over the Internet, and you can get some of the power and efficiencies that bigger businesses are getting.”

Before making the switch: