6 Areas Where IT Departments Can Create Business Value

Many small-business IT departments are emerging from their silos within the company and contributing to the overall discussion of value propositions and business requirements. This also holds true for large companies such as Intel.

Chris Peters, director of industry management at Intel, outlines the six focus areas that the company’s CIO has outlined to help further the IT department’s contributions to company goals overall. This could serve as a useful starting point for your organization as well.

Read more about how Intel’s IT department is creating value in Peters’ post on the Intel Open Port IT Community.

Google+ Rolls Out Profiles for Businesses

As far as social media for business goes, Facebook and Twitter have dominated the field, inspiring companies to set up official presences on these two leading platforms. Google, not wanting to miss out on the social party, recently launched its own social media platform, Google+, to much fanfare. But it was strictly limited to individual users with no option for brands or businesses.

But this week, Google unveiled to the world a new plan by launching its profile for businesses. Sana Ahmed, a social media consultant, highlights why she thinks the Google+ offering is superior to Facebook for businesses in a post on smallbiztechnology.com:

What Google+ has done that Facebook couldn’t do is easily label itself as a business tool. Earlier, I mentioned that administrators can be selective in which users they give access to the Google+ profiles.

In the business environment, Facebook remains controversial as some see it as a time suck while other workplaces like the creative industry readily embrace it. But Google+ in the work environment leaves a different impression in the minds of business users — they already enter the platform with a business mindset.

Read more about Google+ and its business profile in Ahmed’s post on smallbiztechnology.com.

Will the Amazon Kindle Fire Have Its Own Siri?

It’s true: Apple’s Siri has made a big splash on the iPhone 4S. The voice-activated virtual assistant has inspired blog posts, Twitter discussions and more about its quirks, abilities, possibilities and limitations.

Amazon is slated to release its Kindle Fire tablet next week, and there are rumors swirling that the company’s recent acquisition of Yap, a voice-control technology firm, is a sign that something Siri-like could be coming to the tablet.

Josh Smith of GottaBeMobile tries to put the pieces together:

The purchase details were not shared, but the intentions are clear, Amazon wants to bring natural language voice control to the Kindle Fire, and perhaps to future Amazon Android phones.

Yap was known for a voicemail to text service, but has also developed the same technology that allows Siri to understand commands spoken in a natural way.

Amazon has yet to confirm the deal, but Electronista reports that the company’s headquarters are owned by Amazon, which is a pretty good indicator.

Is natural-voice technology going to be the next battleground for tablets?

Read more about the Kindle Fire’s natural-voice future in Smith’s post on GottaBeMobile.

While the client side of IT strives to shrink its size in form factor, the back end of IT — the data center — appears to be growing and growing.

Wikibon has put together a neat infographic highlighting some of the heavy lifting that the five largest U.S. data centers are doing. For example, did you know that the Lakeside Technology Center uses 50 diesel generators to keep things humming? Or that the QTS Metro Data Center, which is home to Twitter’s servers, takes up a whopping 990,000 square feet?

View the infographic below, courtesy of CloudTweaks. 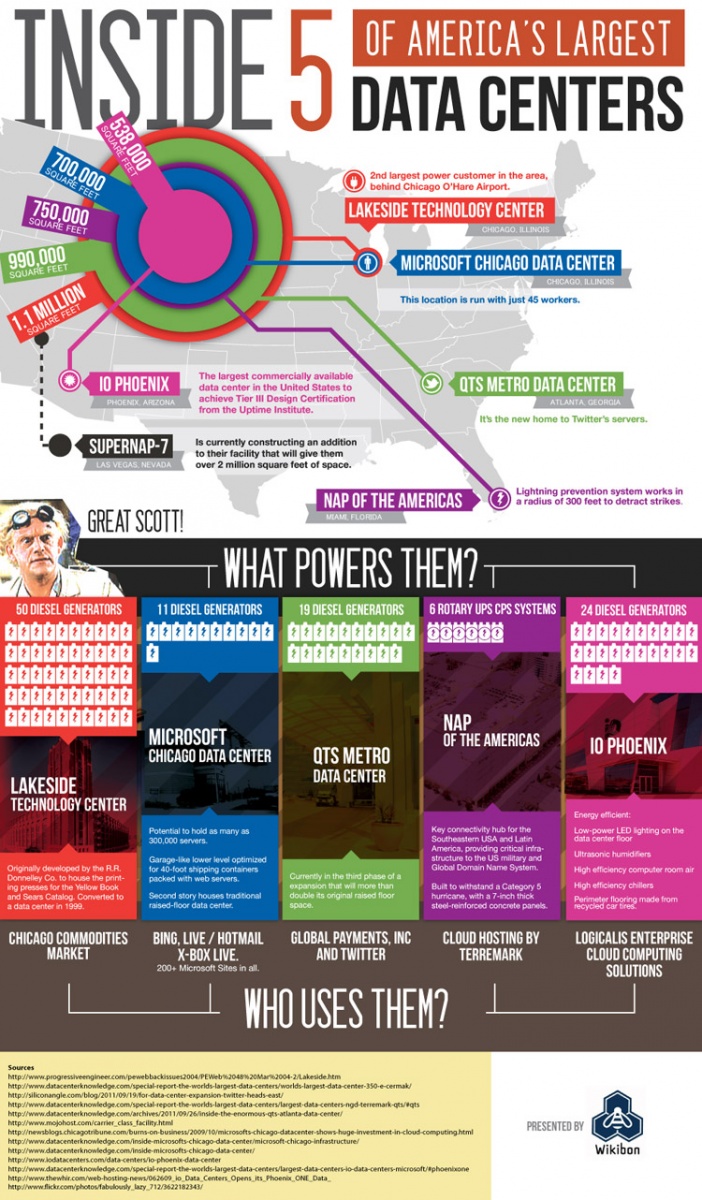 The Smell of Big Data Is in the Air

Big data is coming in, well, a big way. As more computing processes are pushed to the cloud, the demand for infrastructure that can handle such enormous amounts of data is increasing.

Apache’s Hadoop software framework was built to handle big data applications, and Cloudera, one of the frontrunners in offering Hadoop-based services and software, is partnering with NetApp in a deal that allows NetApp to offer Cloudera’s version of Hadoop as part of its solutions.

Chirag Mehta of Cloud Computing sees this move as a sign that big data is going mainstream, the outcome of which he sees playing out in a few different ways:

Storage is a mega-growth category: We are barely scratching the surface when it comes to the growth in the storage category. Big data combined with the cloud growth is going to drive storage demand through the roof and the established storage vendors are in the best shape to take advantage of this opportunity. I wrote a cloud research report and predictions this year with a luminary analyst Ray Wang where I mentioned that cloud storage will be a hot cake and NoSQL will skyrocket. It's true this year and it's even more true next year.

Push to the private cloud: Like it or not, availability of Hadoop from an "enterprise" vendor is going to help the private cloud vendors. NetApp has a fairly large customer base and their products are omnipresent in large private data centers. I know many companies that are interested in exploring Hadoop for a variety of their needs but are somewhat hesitant to go out to a public cloud since it requires them to move their large volume of on-premise data to the cloud. They're more likely to use a solution that comes to their data as opposed to moving their data to where a solution resides.

For more on the future of big data, read Mehta’s post on his blog.

5 Ways to Boost Wireless Coverage in Your Office

Nothing hinders mobile computing worse than spotty wireless coverage. Most people are accustomed to accessing the Internet from anywhere on their devices, but what do you do when you find that one spot in your office that turns your wireless coverage into a dead zone?

Cisco’s Small Business blog has a few tips that might come in handy:

ArenaNet is renowned for creating the immersive competitive online role playing game, Guild Wars, but they’re also leading the charge on the IT management side by implementing a bold and compelling BYOD policy.

Workers at ArenaNet pay for half of the cost of their personal notebooks, through interest-free payroll deductions, with the stipulation that the device be used primarily for work for the first year. So far, ArenaNet has seen a significant boost in morale and productivity as a result of the BYOD program.

Get the full picture on BYOD in this feature story in the latest issue of BizTech.