Decentralizing IT: Too Much of a Good Thing

The pendulum is swinging once again toward a decentralized, independent-minded approach to IT within many companies. Chris Curran, a PwC analyst, highlights this growing trend, which he’s seen at work in the financial-services industry. Some companies have even dismantled their IT departments entirely and dispersed IT talent among various business units.

Cloud computing, social media and the demand for high availability have made flexibility and speed a necessity for many IT departments, so to that end, decentralizing IT makes sense. But Curran cautions against going to the extreme:

Complete decentralization without a CIO is a lopsided approach to IT governance. To effectively align business and technology to drive innovation, mitigate risk and manage costs, companies need to strike the right balance between centralization and decentralization.

Too little centralization breeds redundancy and complex IT environments that give rise to risk and unclear responsibilities and objectives. This costs time and money. On the flipside, too many restrictions from command-and-control can stifle innovation and speed and prompt business units to seek outside help without involving IT at all.

Read more about striking the right balance between centralized and decentralized IT in Curran’s blog, the CIO Dashboard.

Are you one of those people whose eyes glisten over processor speeds, RAM and graphics cards? If so, you might want to change your focus.

Most techies pay special attention to these specs, which leads some companies to compete solely on that basis. But relying on specs as the only differentiator when evaluating technology appears to be a losing proposition in today’s climate.

People care about their experience with technology. Business users, as well as consumers, are inclined to choose devices that meet their needs, not necessarily those with the strongest specs. Specs should matter only to the extent that they advance the desired experience, says Josh Smith, a writer for GottaBeMobile. He joins the chorus of technology enthusiasts who are crying, “Down with specs!”

Back in March, we called attention to the meaningless state of specs in the tablet wars, and went so far as to claim that specs don’t matter to shoppers. These articles are just seven months old, but specs have been dead for much longer than that for the average shopper.

Here are the questions people ask me when they are looking for a new phone, tablet or notebook.

And here are the questions they don’t ask:

I see this more and more, whenever someone wants a new gadget, phone, computer or TV, they only want to know if it will meet their needs. Sure, there are some baseline specs that get mentioned, but these are only needed to avoid the crap that makes it onto store shelves.

Are Smith and the tech press right? Should there be less focus on product specifications, and more on product features?

Read more about the tech specs debate in Smith’s post on GottaBeMobile.

Gartner Lists Its Top 10 Technologies for 2012

With many companies already knee-deep in planning for the coming year, it’s worth thinking about what the future holds for business IT in 2012.

Small Business Labs sizes up Gartner’s list of technologies that organizations should keep in mind for 2012:

Read the rest of the list on Small Business Labs.

Businesses have been buzzing about cloud computing for the past year, and it looks as if many of them are putting some action behind their words.

Symantec has created an infographic depicting cloud computing as a roller coaster, using data pulled from its State of the Cloud survey. According to the survey, 75 percent of businesses are either contemplating a cloud solution, implementing one or already have a cloud deployment up and running.

View the Symantec infographic below from CloudTweaks. 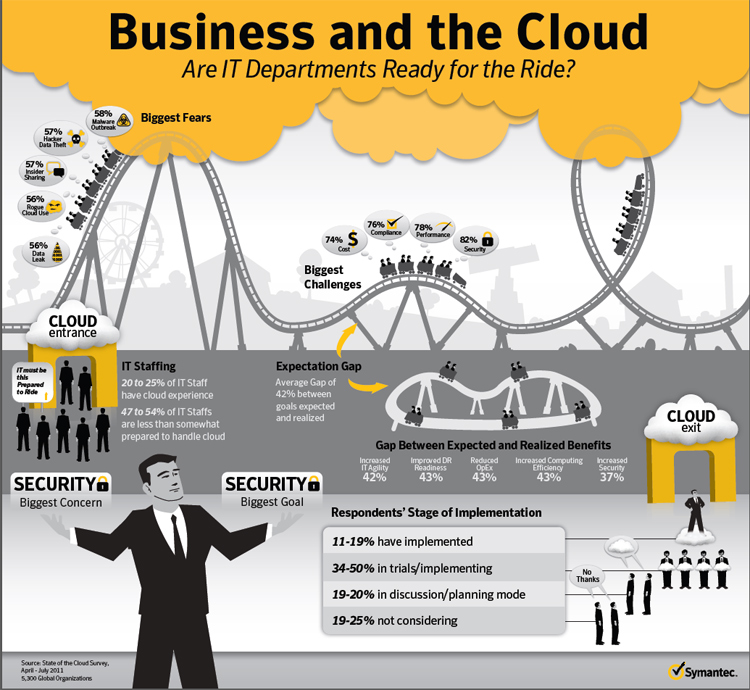 When it comes to storage intelligence for virtualized servers, there are two schools of thought: Hypervisor or Arrays.

Stephen Foskett defines the two camps as “Hypervisor Huggers” and “Storage Stalwarts” in his blog.

Storage Stalwarts, on the other hand, like the robust sturdiness of an enterprise storage array. VMware’s APIs let Storage Stalwarts use virtualization for their processing, while maintaining their arrays for storage.

No matter what side you choose, Foskett advises you to avoid one thing:

The only untenable stance is trying to keep a foot in both worlds: It’s foolish to buy an enterprise array and use it as bulk storage!

So, which side of the fence are you on?

For more on the hypervisor vs. storage array divide, read Foskett’s post on his blog.

BIND, the most popular DNS server software, has suffered a flaw that is causing servers to crash, according to a report from Threat Post.

The Internet Systems Consortium, the nonprofit responsible for maintaining BIND, released the following statement with regard to the vulnerability:

"Organizations across the Internet reported crashes interrupting service on BIND 9 nameservers performing recursive queries. Affected servers crashed after logging an error in query.c with the following message: "INSIST(! dns_rdataset_isassociated(sigrdataset))" Multiple versions were reported being affected, including all currently supported release versions of ISC BIND 9. ISC is actively investigating the root cause and has produced patches which prevent the crash," the ISC said in an advisory on the BIND flaw.

"An as-yet unidentified network event caused BIND 9 resolvers to cache an invalid record, subsequent queries for which could crash the resolvers with an assertion failure. ISC is working on determining the ultimate cause by which a record with this particular inconsistency is cached. At this time we are making available a patch which makes named recover gracefully from the inconsistency, preventing the abnormal exit. "

The ISC has already put out a patch that should resolve the issue, which can be downloaded directly from the ISC here.

Read more about the BIND vulnerability in the article from ThreatPost.

Can Electric Cars Make Their Way to the Mainstream?

Electric cars could be the key to America’s freedom from fossil fuels. So what’s preventing us all from running out and trading in our gas-guzzlers for snazzy EVs?

Colin Read, vice president of corporate development at ECOtality, explains some of the challenges that have made electric vehicles less of a mainstream choice in a recent story in BizTech. He also touches on ways to overcome these challenges, which could make electric cars a real-world choice for mainstream consumers.

Read his comments and more in this story from BizTech.