No business likes red ink. But at Dr. Tattoff, the staff takes that dislike to a whole new level — one that has nothing to do with finances.

The tattoo and hair removal company not only wants no red ink on its books, it also aims to remove it (along with black, blue, orange and a host of other colors) from its clients’ skin. It does so with the help of laser technology.

To keep finances in the black, the company turns to information technology to make the administrative side of its business and customer service as efficient as possible. In the past year, that involved replacing its backbone network and deploying a Voice over IP telephone system to support four-dozen employees at four metropolitan Los Angeles clinics and a recently opened clinic in Dallas.

“We had separate systems in our clinics,” says Mark Edwards, Dr. Tattoff’s CFO. “They were not interconnected in any way, and we had a great deal of difficulty with those systems in terms of coordination.” What’s more, the former setups provided no opportunity for easy expansion. The company wanted a way to quickly launch new clinics using a standard systems platform and in-clinic gear that wouldn’t require a heavy investment in IT support staff.

“We needed a solution that was simple at the local level but would allow us to install the solution like a cookie cutter in each new location as we grew,” says Edwards, who in addition to being the CFO oversees IT for the company.

Tattoos are a booming business, and so too, the company expects, will be tattoo removal.

“We don’t know how many tattoos are being inked every year, but we do know that there’s a significant regret factor,” Edwards says.

Although there are no figures on the total number of tattoos, estimates put the number of tattoo studios nationwide at around 20,000, says Ian Kirby, the company’s chief marketing officer. “As long as a market can support a Dr. Tattoff clinic, nothing would make us happier than to help people get rid of tattoos they no longer want,” he says.

Laser Tattoo Removal: How It Works

Learn more about the tattoo removal procedure from Dr. Kirby himself here.

The opening of the Dallas office this summer was the Dr. Tattoff team’s first push outside of California, but Edwards and brothers Ian and Dr. Will Kirby, a board-certified dermatologist and the company’s medical director, hope to continue expanding over the next five years.

“After Texas, we have plans to open clinics in Georgia and Arizona as well,” Will Kirby says.

The business has grown swiftly since it opened with a single clinic in Beverly Hills in 2004. On a typical day, each clinic sees as many as 25 to 30 patients, although busy days can push that number as high as 60.

That’s a lot of setting of appointments and answering patients’ queries.

“We used to just pick up a phone and have a piece of paper, and that’s literally how we booked appointments,” Will Kirby says. “Now, we are so much more efficient.”

Video: When Less Is More 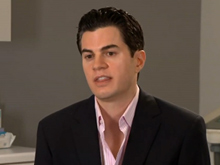 “We stripped down the entire backbone network and deployed VoIP everywhere. Each location now has a Cbeyond circuit that provides the trunks and Internet connection at a T1 level,” Edwards says. “And each location communicates with our Irvine location, which will ultimately become a call center and corporate office.”

The new phone system requires a single rack in each location, not much bigger than 2 feet by 2.5 feet, to house the network gear. “That’s all that’s required to run the system,” Edwards says. And he can control all the equipment centrally from Irvine, including scheduling software that the clinic staff accesses from their PCs using Windows Remote Desktop.

The VoIP system has helped Dr. Tattoff’s clinic staff better manage inbound and outbound phone calls. Plus, Edwards has started to take advantage of the reports generated by the ShoreTel system.

Now, he can look at a particular time period for any day and see call volume across all five locations. Previously, the only way to gather such data involved manually reviewing monthly bills. Armed with this information, the company can make smarter staffing and business plans, he says.

The new phone system and network has set the stage for future technology investments as the company grows.

“This project formed the foundation for the development of our systems going into the future,” Edwards says. “It’s the infrastructure that will allow us to do things like set up a call center, implement virtualization and move to virtual desktops.”

Equipping staff with Wi-Fi mobile phones lets them roam the office and still have phone access. Here are some best practices for deploying Voice over IP for wireless users.