Sierra Pacific Packaging office workers didn't understand what went wrong. The Internet was just as slow as it ever was, despite deploying new Gigabit Ethernet, or Gig-E, switches, which whip data across its network at a speed of 1 billion bits per second (bps).

The glitch? Of course, there wasn't one. "The Internet is not supposed to be faster," quips Jonathan Smith, information technology administrator at Sierra Pacific in Oroville, Calif. "That is not a benefit to the upgrade." Gig-E's benefit, he explains, is vastly faster speed, but only within the local-area network. Once outside its premises, the Internet speed is limited by the firm's connection, a 1.5Mbps T-1 line leased from the local phone company, SBC.

"We have file sizes that are 1, 2 and 6 gigabytes that go from one server to the other," says Smith of the design files that the 100-person packing firm commonly deals with. "I noticed a dramatic change when I upgraded to Gigabit Ethernet. Processes that were taking about four to five minutes were now taking one or two minutes."

Gig-E transmits data at 1 gigabit per second, roughly 10 times faster than so-called Fast Ethernet, which operates at 100Mbps and is widely used in most businesses today. (It earned its name because it was a tenfold enhancement of the original 10Mbps Ethernet technology.) The technology is ideal for speeding file transfers of large, graphics-heavy files, video and sound between computers. It also will speed the retrieval of electronic archives from storage and the backup of large hard drives. But don't upgrade to turbo-charge the Internet or to boost the transmission speed of most e-mail or relatively small files, such as text documents or spreadsheets. Existing Fast Ethernet technology has enough juice for those applications.

"Even at the early part of the migration to Gigabit [Ethernet], we were seeing file transfers three times as fast as what we saw over [Fast Ethernet]," says Charles Dostale, systems administrator at Silver Oaks Communications. The media design firm in Moline, Ill., uses Gigabit Ethernet for moving video and audio files that it once had to transmit painfully slowly over analog phone lines via modem.

Though the price of Gig-E hardware has dropped significantly as the technology has matured, cost is still the principle barrier to widespread adoption. Gigabit equipment — particularly Layer 3 switches, which can route voice and other Internet Protocol-based services — still carries a significant price premium over slower Ethernet products. For example, a 12-port Layer 2 Fast Ethernet switch from Hewlett-Packard costs $500, while a NetGear 12-port Layer 3 Gigabit switch costs $1,029. "Gigabit has seen a huge drop in price, though it's not at parity," says Tim Law, a senior product line manager for Broadcom, which supplies Gig-E components to most business PC makers.

Dell'Oro Group of Redwood City, Calif., estimates that less than 15 percent of U.S. small businesses use Gig-E in their networks, but the market research firm predicts widespread adoption by 2007.

The good news for small businesses in need of speed is that Gig-E is fully compatible with existing Ethernet hardware, so networks can be upgraded piecemeal, adding higher-speed components — hubs, switches, routers, network interface cards (NICs), etc. — only where the extra bandwidth is needed. The converse is also true, however. Every component that handles network traffic between devices that need the higher throughput must be upgraded — in some cases even the cabling. Any bottlenecks along the way can negate advantages of the Gigabit gear. Sierra Pacific Packaging wanted its 30 workstations and three servers to be upgraded, so it installed four Gig-E switches and a handful of network cards for the older PCs that didn't have Gigabit capability built in.

Brandon Buffin, IT director for Ball Homes, a Lexington, Ky.-based home builder, took a similar measured approach when the company upgraded to Gig-E in 2004. Rather than extend the higher-speed network to each of 150 desktops, Buffin upgraded only 12 servers and the network ring that interconnected them. That allowed Ball Homes' IT workers to move computer-aided design and other large files between the servers at 1Gbps while keeping the desktop computers, whose users didn't need as much oomph, at 100Mbps.

It also allowed Ball Homes to keep a lid on costs. To bring Gig-E to every desktop, the company would have needed to upgrade 15 switches, at $2,500 or more each. It also would have been forced to upgrade its 150 Internet telephones. That's because Ball Homes, like many small businesses that have turned to Voice over Internet Protocol, or VoIP, connects each PC to its network through an IP phone that has a built-in network switch.

So, how much can a small business expect to spend to upgrade to Gig-E? At an average of one network switch for every 10 desktop computers, a small business with 30 older desktops and four servers could easily spend $10,000. That includes at least $1,000 to $2,500 for each switch, $50 to $125 for each NIC and $1,000 for 500 feet of fiber-optic cable. Many businesses can save on the cost of cabling upgrades and won't need new network cards for newer desktops or notebook computers that have Gig-E connections built in. While optic fiber is often used in larger enterprise LANs, Category 5e or Category 6 copper cable works just fine for a small business LAN.

As a media design firm, Silver Oaks needed to move large, graphics-laden files among desktop users, so it started its move to Gig-E when a 5-port, unmanaged switch hit $1,500 and network cards approached the $400 range, recalls systems administrator Dostale. "All of our production systems now have Gigabit to the workstation, and many of the servers have more than one Gigabit interface."

As the price of Gig-E dropped, Silver Oaks migrated more and more of its network to the technology, Dostale explains. But departments like sales and finance still use older Fast Ethernet, although each 100Mbps switch has a Gigabit uplink to the high-speed backbone.

Things to consider before upgrading your small-business network to Gigabit Ethernet:

• Big shots: Gigabit Ethernet makes a huge difference when moving large files, such as high-resolution photographs, video or sound, around your network. E-mail and other text-based applications gain little.
• Cha-ching: The biggest chunk of change will go toward the Gigabit switches, which often cost nearly twice as much as those used for older Fast Ethernet. Other components are only nominally more expensive.
• Hold the Phone: Standard Internet Protocol phones can't take advantage of Gigabit boosts in speed. Look for Gigabit-compatible phones just coming to market this year.
• Phased Migration: To lower the costs, consider first migrating critical teams, such as those who work with media-rich files, then moving other users as prices drop.
• Inexpensive Interface: Buy Gigabit network cards for existing workstations rather than purchasing new machines. 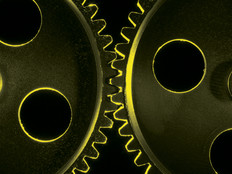