Big companies often create elaborate custom conference rooms, complete with high-tech audio-visual equipment that small businesses can only dream of. But thanks to the Epson Home Cinema 1060 projector, a top-tier experience is now accessible for businesses of any size.

The Home Cinema 1060 was designed with the rigorous demands of entertainment media in mind, but those same features also make it perfect for converting any existing space with an available blank wall into an impressive conference room. And it can do it simply, with little to no IT support needed.

At less than 6 pounds, the portable 1060 punches well above its weight. It’s nearly as good as many heavy, fixed projectors that must be bolted to the ceiling; in fact, with as many as 3,100 lumens and a good focusing lens, it’s possible to expand images to fill a space five times larger than a 60-inch television.

Even expanded to maximum size, the images the 1060 projects remain crisp, whether they are packed with minuscule details like a complex schematic or part of a quick-moving picture such as a video. The main reason is the 3LCD technology, which constantly projects primary colors through separate beams. The high 15,000:1 contrast ratio and full HD native resolution also help.

MORE FROM BIZTECH: These types of IT projects deserve to be cut.

On the PassMark Software video performance benchmark, the 1060 was able to display extremely fine details such as gray grids over a gray background without triggering any moiré or dithering effects like you find with less advanced projectors. And when movement is displayed, there are no motion lines or artifacts injected by the projector trying to keep up. It was even able to display subtle alterations in color and hue along a 256-step grid where the differences were less than 1 percent. 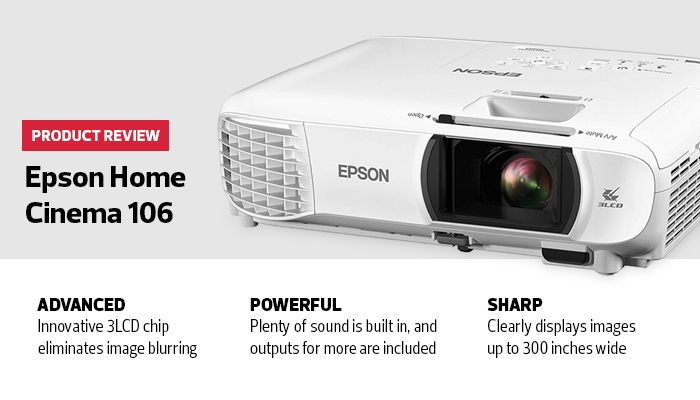 In terms of image cohesion, the 1060 fared extremely well for a portable projector. The biggest difference in light levels between the corner of a test image and the center, at 10 feet from the lens, was recorded at 124 lumens. Given that the naked eye can barely distinguish light level differences greater than 100 lumens, most people won’t be able to detect anything but a solid, universally bright image.

With a light frame and an internal speaker, which is mono but loud, the 1060 can be set up in about a minute. Yet this projector is capable of transforming any space into an impressive, large display area worthy of an expensive conference room.

Reproducing More of What You See with 3LCD

Most portable projectors rely on digital light processing, including quite a few Epson models. Depending on the application, DLP can be quite useful. The primary advantage is that images are created microscopically on small mirrors across a grid, so they are extremely tiny. This approach made possible the development of ultra-portable projectors, such as the newer pico-type models that can fit in a person’s pocket.

DLP is highly accurate but works best for static displays. To add color to an image with a DLP projector, a color wheel is placed between the lamp and the DLP chip. The wheel spins in conjunction with the image chip, so though the image is being blasted by many colors in sequence, the human eye perceives it as a solid image most of the time.

One problem with DLP technology is that when images are moving very quickly, such as during some movies or sporting events, the wheel and the color chip controlling it may not be able to completely keep up. This can result in inaccurate colors being displayed, motion lines, artifacts on the screen or even blurry sections.

3LCD to the Rescue

To avoid that, Epson uses its proprietary 3LCD technology in projectors like the Epson Home Cinema 1060, which are designed for accurate display under any conditions.

It accomplishes this by separating red, blue and green light using dichroic mirrors from the white light the projector lamp is blasting. Each separated light color gets its own LCD panel, which renders the part of the image that uses that color. The light is then recombined using a prism before being projected to the screen.

With 3LCD, the light isn’t sent through a rotating wheel, so there are never any flickers. The light beams remain sorted but unbroken as they pass through the projector. This makes images easier on the eyes, for one, but also enables projectors like the 1060 to render even very fast motion, since the images are never broken up and sent through a color wheel.

The one disadvantage is that there are a lot more parts in a 3LCD setup, so units are generally larger. But the Epson Home Cinema 1060 comes in under 6 pounds — a good tradeoff for most businesses, especially those that need to project perfect and impressive images. Based on our testing, they are absolutely correct in that assessment.