Google Cloud Chief Scientist for AI Fei-Fei Li speaks about Google's vision for an AI-powered and supported workplace at the Google Next conference in San Francisco.

When talk of artificial intelligence in the workplace comes up, it’s hard not to think about sci-fi characters like androids and robots teetering around the office. And while, yes, that kind of Stars Wars–inspired stuff is in the works, the reality of most applications for AI is a bit more grounded than that.

At Google Next, in San Francisco, Google is beating the drum for artificial intelligence loud and clear.

“Rather than replacing human skills, AI’s greatest potential lies in enhancing humanity,” said Dr. Fei-Fei Li, chief scientist of AI for Google, during a keynote address at Next.

But Google isn’t just talking the talk when it comes to AI. They’ve already baked AI features into many of the Google products we know and love. For example, over 10 percent of all replies in Gmail are machine written smart replies, said Prabhakar Raghavan, vice president of G Suite.

“Think about that at an intellectual level. We are at a point in AI where 10 percent of your replies are machine written but human accepted,” he said during a keynote address at Next.

AI Makes an Impact for Retailers and E-Commerce

The dynamics of running a retail experience, either in a brick-and-mortar store or through a virtual experience online, are fraught with challenging variables to balance and juggle.

One of those has to do with inventory. For retailers, photographing and accurately cataloging product images, either to display online for shoppers or for back-office operations, so warehouses can identify items, is a painfully slow, manual process. And because most retailers can’t afford to have someone spend endless hours photographing and tagging these images accurately, many have come to live with incomplete or inaccurate archives of their inventory.

But Target saw an opportunity to change that with its mix-and-match swimwear offerings. 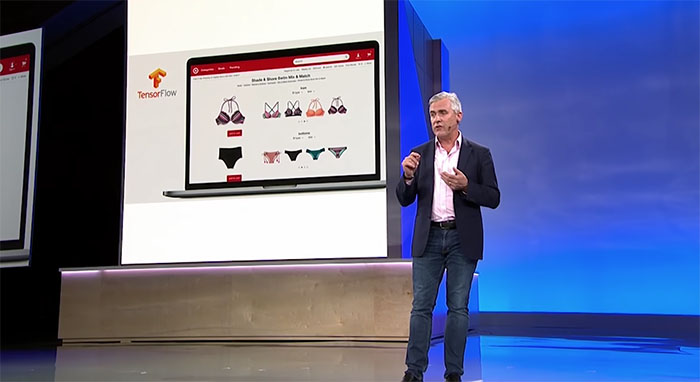 Target CIO Mike McNamara demonstrates how AI is helping Target more accurately and efficiently upload and tag imagery for its mix-and-match swimwear at Google Next 2018.

“Today at Target, we’re using AI to tackle some of our thorniest problems, like supply chain optimization, but we’re also using AI to solve a gazillion everyday little problems,” said Target CIO Mike McNamara, speaking at Next. “For example, we sell mix-and-match swimwear online, and we used to rely on photographers to tag their images as, say, a bikini top or a bikini bottom. Well, those photographers are artsy types, and it turns out that accurate data entry is not high on the list of their priorities. The result? Misery. Today, we use a trained AI model to tag the images, and the result is joy.”

Urban Outfitters wanted to give its customers the ability to snap a picture of clothing in the real world and use visual search through its mobile app to see if it matched with a clothing item available at their stores, so the customer could buy the look that they admire. When the in-house execution of this idea failed, the company started over again and tapped Google Cloud’s Auto ML product to train a machine learning model against its catalogue, said Li.

“First came an immediate accuracy boost, since Auto ML is based on Google’s state-of-the-art image recognition technology. Their app had a major advantage when recognizing products in the real world. It was faster too. Processing time dropped from over 10 seconds to just two or three seconds, and training time fell from weeks to a matter of hours,” said Li.

AI within Reach for All

In the same way that continuous improvements to smartphone cameras have made nearly everyone a photographer, documentarian or filmmaker, Google hopes that its suite of products will make it possible for anyone to program and develop machine learning models to solve personal needs.

“AI has a mass-customization problem, and what I mean by that is two customers that have the same problem will likely require different models trained on different data, and that's not easy to do,” said Rajen Sheth, director of product management for Google Cloud AI. “So this is why Auto ML is so crucial — it lets you easily create some of the most advanced models in the world without machine learning expertise.”

To date, Google has over 14,000 customers paying for its AI products, with interest ramping up as awareness of Google Cloud’s AI tools spreads, he added.

“We’ve advanced the state of the art significantly, all while making it more accessible than it’s ever been,” said Li. “AI is no longer a niche for the tech world. It’s the differentiator for businesses in every industry.” 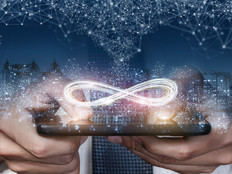 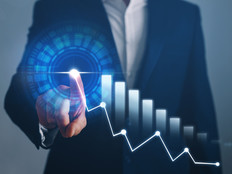