Community bankers can forget millennials. If they want to think about their future customers, they should look at 8-year-olds.

That's the advice of futurist and author Mike Walsh, who spoke about the role artificial intelligence and machine learning will play during a keynote appearance on Feb. 27 at the American Bankers Association National Conference for Community Bankers in Honolulu. Walsh said that banks will need to cater to the preferences of this generation, which is being raised alongside AI assistants such as Amazon Alexa and Google Home, and deliver more personalized services. That will require changes in bank culture and structure, he said.

Machine learning is a subset of AI which uses algorithms to learn on its own, detect patterns and then predict outcomes to potentially operate autonomously. Community banks have a variety of uses for machine learning and can partner with fintech companies to take advantage of the technology, according to AI and fintech experts who spoke on a separate panel at the conference.

Banks can use machine learning to detect fraud and improve decision-making about approving credit and loans, the experts said. That will require investments in technology, but they argued that fintech companies can help community banks get access to larger amounts of data that will enhance their services and make them more efficient.

How Machine Learning Will Change Banks

Walsh, CEO of Tomorrow, an innovation consultancy, and author of the books Futuretainment: Yesterday the World Changed, Now It's Your Turn and The Dictionary of Dangerous Ideas, said community banks must reconcile what it will mean to be a "cognitive bank" with their identity as community banks, which is tied to people and connections.

As banks think about incorporating machine learning into their services to make them more predictive, they will need to appeal to the generation that was born just around or shortly after Apple debuted the first iPhone in 2007, he said.

In the near future, Walsh said, technology will start to disappear as a visible presence and will become part of the fabric of daily life. He said sensors and algorithms will nudge and reward customers for making certain decisions, including financial ones.

It's not enough for community banks to hire or outsource data scientists or AI experts, Walsh said. "Technology has already transformed your organization," he said, noting that banks have made substantial investments in recent years in core technology upgrades and partnerships with fintech companies.

However, he said, "none of that really makes much difference unless you look at your true operating system, which is your culture. Culture is really what makes all the difference." That boils down to the way employees interact, collaborate, solve problems and make decisions, Walsh said.

If community banks can automate tasks such as credit approvals using machine learning, Walsh asked, "How do you elevate what that team then does?" As banks answer that question, they will likely reconfigure their office spaces and how work gets done to accommodate changes in technology, he said.

"What are the levers you need to pull to get people to perform at their best?" Walsh asked. As machine learning becomes more prevalent in banks, they will need to "rethink productivity," find more creative thinkers and use data to "hack and think about" their culture, he added.

What Banks Can Do with Machine Learning

Community banks can do a lot with machine learning tools, experts said at the conference. Will Furrer, chief strategy officer at Q2, which provides a digital platform for banks and credit unions, said that banks must decide what they want to use it for.

For example, a bank might want to stop wire fraud. It would need to gather data on wire transfers to train a machine learning tool and build an algorithm that could detect fraudulent transfers. To do that effectively, Furrer said, banks would need to look at factors like the IP address of the person originating the transfer, the time of day, the tempo of the entity going through the transaction (to see if it is a human or robot), the device being used to make the transaction and so on. It's critical that the algorithm accurately detect the fraud before the transaction is approved, Furrer said. 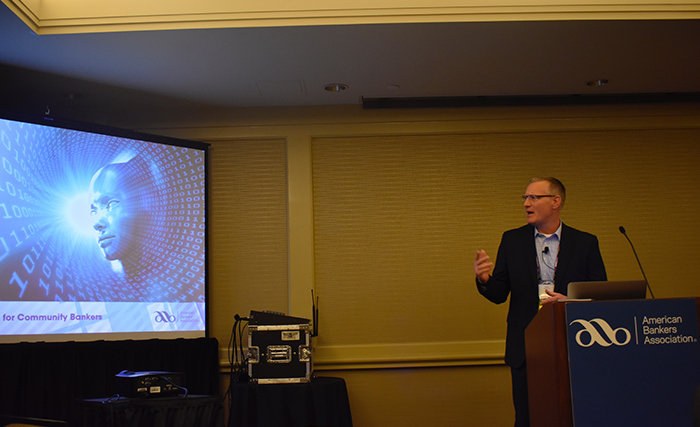 "There is a small to medium-sized business on the back end whose life you hold in your hands," he said. "Because if you approve that wire to [the country of] Georgia and not Atlanta, we're in trouble."

Banks need to put the expertise from their employees who work in fraud detection and compliance into algorithms so that those decisions can be made faster, more easily and with less friction, Furrer said.

Ricardo Villadiego, CEO of Easy Solutions, a fraud detection firm, said banks are often able to see fraudulent attacks but not respond because they do not have the ability to correlate all the data in their systems and gain visibility about what their customers are experiencing.

Detecting fraud starts with determining when criminals are harvesting information from customers that will fuel fraudulent transactions. Machine learning "helps us do a better job at every step of the evolution of the fraud attack," Villadiego said. The technology allows banks to identify when criminals are launching attacks, when customers are accessing digital channels or devices that have been compromised and when a customer might be browsing or acting suspiciously.

At the same time, criminals can also use machine learning to adapt and launch more sophisticated attacks, Villadiego said, meaning that banks will need to deploy AI to fight their AI.

Machine learning can also be used to make decisions about whether to extend credit.

Jeff Keltner, head of business development for Upstart, an online lending marketplace that provides personal loans using nontraditional variables, said there is a mismatch between how credit is being priced. According to data from Upstart and TransUnion that Keltner cited, 83 percent of Americans have never defaulted on their credit cards, but only 45 percent have access to prime credit.

Machine learning can help change that equation and is built to solve exactly this kind of problem, Keltner said. "If you are not using machine learning in the lending process in 10 years, you are not going to be competitive in the space," he said.

Offering credit to a customer is a complicated decision and it relies on more than just a person's FICO score, Keltner said, noting that Upstart gets more than 500 variables from a credit profile it can use to train a machine learning tool.

The statistical models behind machine learning have grown more sophisticated in the past few years, Keltner said, and computing power has increased to the point that banks can fully take advantage of them.

Upstart looks at hundreds of variables in a person's credit file to determine their creditworthiness, and its machine learning tool operates on a continuous scale, so someone with a FICO score of 642 will be evaluated differently than someone with a FICO score of 643. A person might not have the best score, but if they are in a stable occupation such as teaching or nursing, the algorithm will know they will have a stable income and be able to make credit card payments.

For all of BizTech's coverage of ABA's National Conference for Community Bankers, click here.