Google Assistant, seen here on the Google Pixel XL smartphone, is an example of an intelligent voice assistant.

With the advent of the iPhone, the touch screen became the primary way users interacted with their mobile devices, a trend that continued with tablets and wearable technology. However, a potentially disruptive force looms on the horizon: voice.

According to Gartner, by 2018, 30 percent of our interactions with technology will be through "conversations" with smart machines. Gartner also predicts that, by 2019, 20 percent of all smartphone interactions will take place via virtual personal assistants like Apple’s Siri, Google Now and Google Assistant, Microsoft’s Cortana or Amazon’s Alexa.

https://www.cdw.com/content/brands/appleSamsung is also expected to introduce a voice assistant on its Galaxy smartphone, following its acquisition last fall of Viv, an artificial intelligence firm run by Dag Kittlaus, co-creator of Siri.

Some industry analysts, such as Brian Roemmele, argue that we are moving toward a “voice first” world. Writing on the website Techpinions, Roemmele says that voice offers three main advantages over current user interfaces.

First, “voice is an ambient medium rather than an intentional one (typing, clicking, etc). Visual activity requires singular focused attention (a cognitive load) while speech allows us to do something else.”

Second, “voice is descriptive rather than referential”; when users speak, they are describing objects in terms of their functions and characteristics. Most interactions with computers today are referential.

Third, “voice requires more modest physical resources,” and voice-based UIs can be “scaled down to much smaller and much cheaper form-factors than visual or manual modalities.”

Viv could represent the future of voice-based interactions, fueled by artificial intelligence. The idea is that these virtual assistants will become more intelligent the more they interact with humans and the more data and context they receive.

“Viv is built around three principles or pillars,” Roemmele writes. “It will be taught by the world; it will know more than it is taught; it will learn something every day. The experience with Viv will be far more fluid and interactive than any system publicly available. The results will be a system that will ultimately predict your needs and allow you to almost communicate in the shorthand dialogs found common in close relationships.”

For now, Amazon's Alexa, the virtual assistant behind the Amazon Echo device, seems to be the leading voice-based assistant, at least in terms of adoption in mobile and other devices.

Alexa was everywhere at the Consumer Electronics Show in January, as CNET reports. It’s going to be in an LG refrigerator. Ford is going to add in-vehicle Alexa controls for cars running its Sync 3 voice platform. Huawei says its new flagship smartphone, the Mate 9, comes with an app that gives users access to Alexa.

Some are skeptical, though, that voice will replace touch screens. Mobile Systems International analyst Robert Francis, writing on the website IT Pro Portal, notes that “there are a host of things we commonly do that it’s easier to do with our hands and eyes than it is with our voices and ears.”

“It’s easier to send a quick text and to read it than it is to call (and thus, as a recent Neilson survey indicates, on average, Americans exchange twice as many texts as calls). It’s easier to use a finger to snap a picture; triage our email inbox; or navigate through Spotify or iTunes,” he writes. “It’s much easier to write longer documents with our hands and edit them with our eyes than it is to do either by voice—consider the limited uptake of the near-perfect Dragon Dictation.”

Francis also says it is easier and quicker to navigate pages and screens visually rather than aurally, including web search results, documents and maps.

“The possibilities of voice are exciting. But they’re not going to affect a fundamental shift in the way we use our devices most of the time — as did Windows or the iPhone,” he says. “We may do more with voice than we do now. But we won’t keep our hands away. We know this, because after three decades, it still just feels right.”

Roemmele concedes that voice-first devices will not eliminate touch screens, but he thinks touch technology will become “ephemeral and situational.”

“There is no doubt keyboards and touch screens will still exist. We will just use them less,” he says. “Still, I predict in the next 10 years, your voice is not going to navigate your device, it is going to replace your device in most cases.” 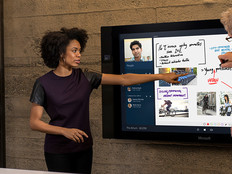 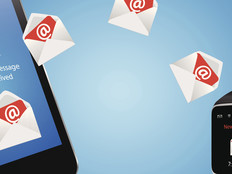