Intel’s disclosure last month that it will put its famous “Tick-Tock” development cycle for new processors on hiatus might not have been a huge shock — Intel had signaled in July that it would delay the launch of its first 10-nanometer chipset to 2017 (the company’s current processors use 14-nanometer technology).

However, the move away from the Tick-Tock model, which Intel announced in its 10-K filing with the Securities and Exchange Commission, may signal that devices that run its chipsets, including notebooks and 2-in-1 devices, will have longer lifecycles. That means that companies may not need to purchase new devices as regularly, since the performance and power consumption benefits of upgraded technology will last longer.

Additionally, as more business applications move to the cloud, companies will be tied less to one kind of processor architecture or operating system for their productivity devices, Jim McGregor, the founder of and a principal analyst at Tirias Research, a high-tech research and advisory firm, told BizTech.

Shifting from the Tick-Tock Cadence

Intel has been using the Tick-Tock model for process and microarchitecture improvements since 2007. However, that is not how Intel will operate going forward.

“As part of our R&D efforts, we plan to introduce a new Intel Core microarchitecture for desktops, notebooks (including Ultrabook devices and 2-in-1 systems), and Intel Xeon processors on a regular cadence,” Intel said. “We expect to lengthen the amount of time we will utilize our 14nm and our next-generation 10nm process technologies, further optimizing our products and process technologies while meeting the yearly market cadence for product introductions.”

What did the Tick-Tock model involve? As chipset news website AnandTech explains, “Intel’s Tick-Tock strategy has been the bedrock of their microprocessor dominance of the last decade. Throughout the tenure, every other year Intel would upgrade their fabrication plants to be able to produce processors with a smaller feature set, improving die area, power consumption, and slight optimizations of the microarchitecture, and in the years between the upgrades would launch a new set of processors based on a wholly new (sometimes paradigm shifting) microarchitecture for large performance upgrades.”

Intel’s shift to a new model, dubbed “Process-Architecture-Optimization,” suggests that keeping up with Moore’s Law is becoming more difficult. Moore's Law holds that the number of transistors in a dense integrated circuit doubles roughly every two years. That now appears to be stretching out to three years, signaling that it is taking longer for processor upgrades to yield the expected benefits.

“As far as Moore's Law, we are always constantly striving to get back to two years,” Intel CEO Brian Krzanich said last week during the company’s first-quarter earnings conference call. “We've given you a timing that's for 10 nanometers; that's more like 2.5 years.”

The Impacts for Businesses

What does all of this mean for companies buying devices powered by Intel’s processors or those of its competitors? McGregor thinks that other processor firms that use chipset designs from ARM Holdings, including Qualcomm and MediaTek, could become more competitive, especially in the 2-in-1 and ultraportable PC categories.

Businesses could look to devices like Apple’s iPad Pro, Microsoft’s Surface Pro or other ultraportable productivity devices to fulfill their needs, according to McGregor.

Newer generations of processors are yielding performance improvements, but not “huge leaps,” according to McGregor. As a result, he thinks that today’s top-of-the-line ultraportable PCs and 2-in-1s, and those coming out soon, will have longer lifecycles than their predecessors.

“As everything goes to the cloud, upgrading on a regular cadence is not going to be a huge requirement” for many businesses, as it was in the past, he says.

“That has been a key requirement,” up until now, McGregor notes. “The best thing for them to do is to invest in the latest and greatest platform, knowing that it will last four, five, six years or more.”

Even if ultraportable PCs might be more expensive than some notebook models, McGregor says that in the long run, the benefits of investing in top-flight technology with the latest processors will pay off. 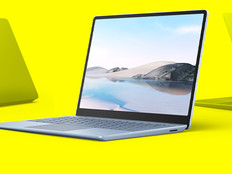