Given the time crunch that most IT workers are under, finding time to study for certification or professional development isn’t easy. That’s why the Internet is a Godsend.

Whether it’s through participating in a professional network like Spiceworks, signing up for an online training program through Lynda.com or even learning through YouTube videos, the trend toward independent learning is strong.

This shift is significant in large part because the U.S. corporate education market is valued at $62 billion, and a meaningful chunk of that revenue is moving online.

CBT Nuggets, an online training site for IT professionals, believes the transition to online training “represents the most aggressive offer to enable IT managers to learn new skills.”

That’s why the company is having an open house of sorts as it invites IT workers to sign up for a seven-day free trial of its courses and video sessions without restriction.

What can an IT worker who already has some real-world experience learn in seven days that could set them apart?

“Somebody who has some basic experience, they could take a course like CCNA security or CCNA route switch from Cisco or CCSA from Checkpoint,” says Keith Barker, a CBT Nuggets trainer. “They could brush up, maybe polish off the edges and really look at those areas they haven’t identified or studied before and then go and prepare and take the certification.”

Some of the most sought-after training and certifications that CBT offers are the Cisco CCENT/CCNA ICND1, which is the entry-level network routing and switching certification; Windows Server 2012, which Barker says “is absolutely huge”; and IPv4 subnetting. Another area of growth and opportunity centers around Big Data — more specifically, training around the Apache Hadoop framework.

“We recently did a series, and it’s done extremely well,” says CBT Nuggets Chief Operating Officer Ryan Lee. “To me, Big Data is a big buzzword, but as you read a lot of the blogs, the posts of a lot of people will say ‘yeah, but what do I do?’ and I think Hadoop has done a good job of bridging that.”

But not everything on CBT Nuggets is set on a strict certification path. The site also aims to illuminate and inform IT workers on emerging technologies such as Bitcoin, the curious encrypted currency that has captured the mindshare of the tech media and prominent venture capitalists such as Marc Andreessen.

The company currently offers a free course on understanding the basics of Bitcoin, which has actually driven donations to the site in appreciation.

“Bitcoin, that technology, is going to change the way everything works with money. This is still the early days; the next five or six years, is still the gold rush, if you will,” Barker says.

Given the rise of massive open online courses (better known as MOOCs), the popularity of Google Hangouts, which offers experts and educators the ability to do one-on-one lessons, online training offers the same “gold rush” opportunity to IT workers. 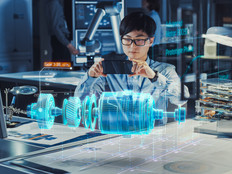