It’s official: The Internet of Everything now has a posse. The Linux Foundation nonprofit recently announced the formation of the AllSeen Alliance, a consortium of companies dedicated to advancing the interoperability of all things.

Also known as the Internet of Things, the concept is that anything (a book, refrigerator, toaster, television, camera, magazine, radio, washer, dryer, etc.) can be connected to a network, thanks to advances in networking, wireless and miniaturization technology over the past decade.

A world where everything has its own IP address promises to bring convenience to consumers and plenty of business opportunities to companies of all sizes, in nearly all markets. The Internet of Everything could also carry with it a whole host of headaches if an interoperable connectivity framework isn’t put in place to make sure all those billions of connected devices can communicate seamlessly and effectively.

That’s where the AllSeen Alliance comes in.

The goal of the alliance is to serve as a platform for member companies to develop and adopt standards and practices that enable the Internet of Everything to fulfill its promise in the real world. According to Alliance founding member Cisco Systems, the net profit generated by the Internet of Everything will reach $14.4 trillion over the next decade as more and more devices become connected to this worldwide network of things. That’s an astounding amount of money just waiting to be shared.

An Open-Source Framework for Interoperability

“The whole concept of an Internet of Things is based on the fact that multiple vendors work together to connect what was once unconnected,” explained Zeus Kerravala, principal analyst at ZK Research, to NewsFactor. “I don't believe this is something a single vendor can deliver on its own. Maybe one or two vendors can drive it, but certainly they need help from a broader set of companies in order to thrive.”

With that in mind, members of the AllSeen Alliance will work together to develop an open-software framework to enable “hardware manufacturers, service providers and software developers to create interoperable devices and services to allow ad hoc systems to seamlessly discover, dynamically connect and interact with nearby products regardless of brand, transport layer, platform or operating system,” according to the Linux Foundation’s announcement of the Internet of Everything consortium.

The Alliance’s initial framework is based on Qualcomm’s AllJoyn open-source project, which makes the tech giant the leading player in leading the consortium forward, at least initially. The plan is to expand on Qualcomm’s technology with contributions by other member companies and the open-source community.

As Sean Hollister writes on The Verge, what AllJoyn already does is pretty useful and clever: “Instead of dictating that devices have to connect with each other over Wi-Fi or Bluetooth or ZigBee and having users painstakingly pair those devices, AllJoyn can do it all, automatically discovering devices and negotiating connections with whichever protocols are available.”

“Today's announcement represents the logical next step for broad adoption of a common software and services framework that will foster a dynamic ecosystem, helping to unlock the promise of the Internet of Everything,” said Rob Chandhok, president of Qualcomm Interactive Platforms, in a statement about the formation of the AllSeen Alliance. “It was just this sort of collaborative approach we envisioned when Qualcomm Innovation Center first developed AllJoyn and made it available to the open source community.”

Internet of Everything in the Real World

As a concept, the Internet of Everything can sound a bit abstract. After all, even if inanimate objects get IP addresses, how does that really change the way we work and play?

In its announcement of the AllSeen Alliance, the Linux Foundation provided the following examples of the benefits of interoperability it hopes to engender for the world of the Internet of Everything through the development of a widely adopted open-source framework:

A family that installs a smart lock built with the framework for their front door will seamlessly be able to connect it to smart lights that also use the framework and security cameras from other manufacturers. Unauthorized entries can trigger the lights to flash and the camera to take a photo of the intruder and send a notification and picture to the smart TV.

At the other end of the spectrum, factory floors — evolving environments with systems that need to adjust dynamically — can benefit from the framework's ability to enable a self-aware network that can constantly learn what new equipment has been added and what capabilities or interfaces that equipment has so that it can immediately begin playing its part in the manufacturing process.

Expect the AllSeen Alliance to demonstrate the first products, including televisions from LG, to support its interoperability standard at CES in January. 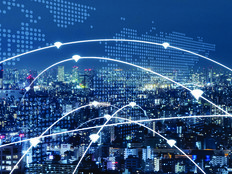