Law firms are used to being audited for regulatory and security compliance, but now there’s a new auditor to worry about: the client.

During a recent episode of “The Digital Edge,” a podcast from the American Bar Association’s Legal Technology Resource Center, hosts Sharon Nelson, Esq., and Jim Calloway spoke with Andy Perlman of Suffolk University Law School about his school’s initiative to create a tech audit for law firms.

The idea of a tech audit for lawyers was born out of Corporate Counsel for KIA Motors America Casey Flaherty’s frustration with his outside counsel’s lack of basic tech literacy. He gave a detailed explanation of the audit and his thought process behind it in a post on the ABA Journal’s Legal Rebels blog.

The result of his one-man audit, in which he measures how long it takes lawyers to complete specific tasks, hasn’t been pleasant. Flaherty outlines the less-than-stellar results of his audit in the Legal Rebels post:

I’ve administered the audit 10 times to nine firms (one firm took it twice). As far as I am concerned, all the firms failed—some more spectacularly than others. The audit takes me 30 minutes. So, somewhat arbitrarily, I selected 1 hour as passing. The best pace of any associate was 2.5 hours. The worst pace was 8 hours. Both the median and mean (average) pace rounded to 5 hours.

While Flaherty’s audit has been eye-opening, it’s limited by the fact that he has to personally fly out and use a stop watch to time the attorneys as they undergo the audit. That’s why he’s teaming up with Suffolk to automate the audit process so that any firm can assess themselves.

“We are taking a lead on automating the audit and enhancing it with additional topics beyond what he used in his version of the audit,” Perlman said during the podcast.

The Need for Digital Literacy in Law

The reflexive response of many lawyers to the audit runs along the lines of “Let the paralegals and admin assistants worry about it.”

But Perlman thinks that’s a head-in-the-sand response that fails to acknowledge that law firms are becoming leaner and more dependent on technology to accomplish everyday tasks.

“The reality in many law firms today, perhaps most, is that they’re becoming leaner. And there are fewer admins and staff who can do this kind of work,” he said. “It might not be a big deal to convert something to PDF in the amount of time it takes to explain it somebody else.”

So why have law firms largely failed to keep their attorneys as tech-smart as possible? Perlman blames the billable hour.

“If law firms made more money if they were as efficient as possible, we wouldn’t be in this situation right now,” he said. “Lawyers would have been trained up a long time ago.”

While efficiency and cost savings are key advantages to investing in tech training for lawyers, competition should also provide an incentive for firms to take technology seriously. Legal services companies staffed by digitally competent professionals are popping up to compete with law firms for services such as document review.

If these nontraditional shops are able to do more work at a faster pace than traditional law firms, that could be a key source of revenue that firms lose, Perlman says.

Suffolk hopes to offer the online auditing tool, which is currently under development, for free, he adds.

While the audit will address the lack of tech proficiency in firms, Perlman believes future lawyers need to leave law school equipped with the necessary tools to produce and innovate with technology.

“Everyone, I think, needs to graduate from law school today with an understanding of the way that technology is transforming practice and the various ways in which practice can be innovative,” he says. 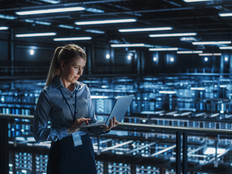