When Congress compromised on Jan. 1 to avoid the fiscal cliff and keep income tax rates the same except for the wealthiest Americans, U.S. lawmakers also gave small businesses a larger tax break to buy technology and other equipment.

The American Taxpayer Relief Act of 2012, signed into law by President Obama, allows small businesses to ­immediately write off up to $500,000 in technology and other equipment purchases in 2013.

Section 179 of the tax code allows businesses to deduct equipment the year it is purchased, rather than use the normal depreciation schedule, which for ­hardware is typically five years. Without the new law, the Section 179 deduction would have dropped to $25,000 for 2013, with no ­bonus depreciation.

Accountants say they are not surprised that Congress increased the ­deduction for 2013, seeing as they’ve approved a larger deduction almost every year for the past decade.

“Officially, it is supposed to stimulate the economy, but in my view, it’s one of those feel-good provisions that Congress passes,” says Julian Block, a tax attorney in Larchmont, N.Y., and author of several tax-tip books.

But it did surprise accountants that ­Congress increased the deduction ­retroactively for 2012, to $500,000 from $139,000. It’s not helpful for businesses in terms of tax planning because the year is already over, but it can help businesses that purchased more than $139,000 in equipment, says CPA Ben R. ­Loggins, owner of ­Loggins & Associates in ­Jonesboro, Ga. 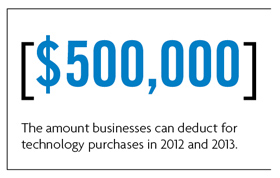 Section 179 limits how much companies can spend on equipment to qualify for the entire $500,000 deduction for 2013. For this year, spending must not exceed $2 million. Every dollar spent above the limit must be subtracted from the deduction. For example, if a company spends $2.1 million on equipment in 2013, the amount they can deduct is reduced by $100,000. In this scenario, the company can deduct only $400,000 total.

Most small businesses will never reach the $2 million spending limit, but the higher deduction does help companies.

A No-Brainer for SMBs

David Abrahamson, president of Professional Sound Images (PSI), in Duluth, Ga., takes advantage of the Section 179 deduction every year. In earlier years, when the maximum deduction was $250,000, he nearly reached that threshold.

“It’s crazy not to take advantage of ­Section 179. It’s certainly helped our ­business,” he says. 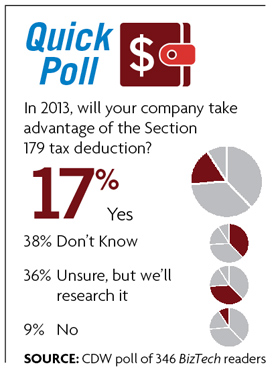 The 48-employee company also purchases desktop and notebook computers and off-the-shelf software for its staff. The company also owns 30 standard printers and six high-speed label printers for shipping purposes. The Section 179 deduction increase to $500,000 will definitely help PSI lower its taxes for 2013, Abrahamson says. ­Although the company doesn’t plan on purchasing $500,000 in equipment, it will likely buy about $250,000 worth, he says.

“Section 179 is becoming increasingly important. Some of the latest tax regulations that have come down, such as the increase in tax rates for those who make over $450,000 and the healthcare reform act, are putting considerable pressure on small businesses,” he says. “When you start to look at those kinds of things, it’s about managing pennies. The recent legislation has dealt us some significant challenges, so whatever tax advantages are left, we want to be able to take ­advantage of them.”

Small businesses should consult with an accountant on how to use the Section 179 deduction and bonus depreciation because it’s not always advantageous to take the largest possible deduction up front, Loggins says: “It will reduce their taxes and boost their cash flow in the short term, but it’s not always smart to take all the depreciation up front, depending on their situation.”

For example, if a business borrows $500,000 to buy equipment and takes the full deduction the first year, it helps lower its taxes that first year. In future years, the company is stuck paying off the loan — say, $100,000 a year — and not getting a deduction for it. That business may struggle with cash flow problems as a result, Loggins says.

Over the long term, it may make more financial sense if the business uses the normal depreciation schedule so that it gets a deduction every year to lower taxes to match the equipment payments, he says. Section 179 can be used only if a business has taxable income.

For businesses that are unprofitable, bonus depreciation is still available. For example, a business that is ­unprofitable in 2013 can use the 50 ­percent bonus depreciation on its equipment spending and carry forward the loss to reduce tax ­liability in future years, when the business is profitable, Tunstall says. Besides lowering taxes, expen­sing equipment all in one year also reduces administrative time related to record keeping.

“It eases the burden of reporting because businesses that qualify don’t have to track depreciation for each Section 179 equipment expense,” Tunstall says.