“Time is money” isn’t just a cliché in the world of high-speed equities trading; it’s also a way of life.

“Every microsecond can equal hundreds of millions of dollars in revenues,” says Alexander Tabb, practice leader and managing director at TABB Group, a research and strategic advisory firm focused on capital markets. “And these performance demands aren’t just in the equities market; we’re seeing these speeds move into the options markets as well.”

As a result, financial services companies are constantly working to reduce network latencies — the time it takes for communications pipelines to transmit messages from senders to receivers. This is particularly crucial for high-speed trading systems, where competitive advantages hinge on proprietary algorithms and lightning-fast transmission times to move market data to trading-house servers. From there, the data is quickly analyzed and acted upon.

With stakes this high, it’s no surprise that the performance levels that constitute “low latency” are constantly being redefined. “A few years ago, these institutions strived for milliseconds; last year it was microseconds; and now they’re thinking about nanoseconds,” Tabb says.

To meet continuous demands for faster systems, vendors of low-latency networking solutions are turning to the latest research and innovations from the world of high-performance computing to hone their competitive edge. The result is a new generation of commercial products that continue to push the performance envelope.

Outwardly, the networking gear may look like typical NICs and switches that any modern enterprise runs to efficiently transport data. But inside, they take advantage of specialized software that provides a boost in acceleration.

This mitigates traditional overhead and latency that results from interactions with operating systems. DBL supports UDP and TCP — two key protocols used in financial trading — with measured application-to-application UDP latencies of less than 3.5 microseconds and 4.0 microseconds for TCP.

“When someone uses DBL, their application is running through accelerated sockets,” explains Dr. Nan Boden, chief executive officer and co-founder of Myricom. The impact on the organization’s existing environment is minimal, she adds. “They don’t have to make any changes to their application.”

A New Standard of Low-Latency Performance

Mellanox was one of the first NIC vendors to support PCI Express 3.0, which doubles the speed of the prevailing I/O standard by significantly increasing available bandwidth. The increased performance capabilities of the new standard also translate into significantly lower overall communications latencies, says Asaf Wachtel, director of business development for Mellanox Technologies. 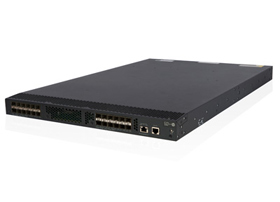 But NICs alone can’t provide low latency from the beginning to the end of a transmission. Network switches also must be optimized for high-performance applications. Examples include Hewlett-Packard’s 5900 Switch Series. These high-density switches deliver sub-microsecond latency using a total of 60 10 Gig-E and 40 Gig-E ports for combined switching capacity of 1 terabyte, says Ahmad Zamer, senior product marketing manager at Hewlett-Packard.

The Mellanox Ethernet family of switches provides high performance and high-port densities in a portfolio of fixed and modular switches that range from 24 to 288 ports and support 1/10 or 40Gbp/s per port.

What to Look For in High-Frequency Trading

When considering capabilities for high-performance networking equipment, low latency isn’t the only concern. IT administrators in trading houses must also control jitter, the variations in latency rates that can disrupt a trade.

Reliability is also essential. “You have to look at the uptime of not only the hardware and software but of the overall solution,” Boden says. “If a server goes down and the client loses trading time, that is a huge deal.”

Because of this, working with a knowledgeable IT partner is important. “This is an intensely competitive and complex marketplace, so having the right partners for the technology pieces can make a huge difference,” Boden adds. “It’s not something you want to try to wing on your own. CDW can put together solutions and recommend options. That kind of recommendation service is extremely helpful in these kinds of markets.”