To serve customers better while increasing productivity and reducing costs, scores of companies are moving past Voice over IP (VoIP) and chat to the concept of unified communications (UC). Here, application suites seamlessly integrate voice, e-mail, presence, instant messaging (IM) and video, along with mobility, to enhance communication and speed the flow of every business activity.

This type of intelligent communication and customer service may sound complicated and virtually impossible. However, it’s a reality today at CDW, thanks in large part to a comprehensive unified communications system based on Cisco technology.

“The goal is much more than an upgraded call-routing system,” explains CDW CIO Jon Stevens. “It’s about empowering our coworkers with a best-in-class unified communications strategy that brings voice, customer information and our sales portals together into a combined tool.

“That way, when one of our account managers picks up a phone, they already know why the customer is calling, what they have previously bought from us, what they are trying to achieve and what they might need. The goal is being a truly informed sales force, customer service group and services team.”

With its highly defined unified communications strategy, CDW is well on its way to achieving that vision. CDW’s internal team, led by Stevens, has spent the past two years working with Cisco engineers and its internal services team to determine and implement what it would take to make the vision a reality.

Unified communications consists of an assortment of real-time communication capabilities. Instead of one solution, it’s made up of a set of products geared to offer a consistent user interface and experience across multiple communication channels and devices. Because of its modular nature, UC is often implemented gradually. Such was the case at CDW.

CDW is a leading provider of technology solutions for business, government, education and healthcare. Based in the Chicagoland area with 25 offices in the U.S. and Canada, the firm features dedicated account managers who help customers choose the right technology products and services to best meet their unique needs – thereby making a strong case for highly effective communication systems.

The company began laying the UC groundwork about seven years ago, when it first implemented VoIP, providing “find-me, follow-me” technology for its workers. The system worked well but was limited in scope, and upgrades required engineers to fly to each CDW location to perform the necessary work.

But attaining the type of ubiquitous presence and responsiveness CDW IT chiefs envisioned required much more that just VoIP and unified messaging. The existing VoIP system, for example, didn’t take advantage of newer technologies like SIP trunking, which could provide numerous benefits, including business continuity and disaster recovery enhancements.

Making major changes meant overhauling the entire communication infrastructure with state-of-the-art technology that not only would create unified communications, but would position CDW well for the future. The timing turned out to be fortuitous; although the firm’s existing communications platform had served well for many years, it was rapidly reaching end of life, and the vendor would no longer support it.

The UC process began with a discussion of how best to achieve CDW’s goals. The core decision-making team ultimately chose to engage CDW’s Advanced Technology Services (ATS) team — the same team that provides full lifecycle technology services and IT consulting to CDW customers.

“Our customers don’t make these types of infrastructure investments every year and neither do we,” Stevens says. “So it was a given that we work with our internal Advanced Technology Services team – a group that does these types of telephony build outs on a regular basis – day in and day out.”

The CDW UC migration began in earnest during August of 2010. “With every engagement, we go through a design phase that helps us solidify and understand what technical capabilities are available,” explains Senior Engineer Manny Chanthasene, who works in CDW’s ATS division. “Then, we can close the gaps with what is required to meet expectations.” 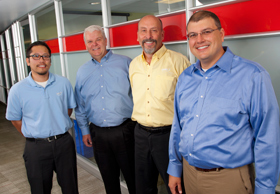 CDW’s internal IT team first worked with Cisco to develop the framework. Once completed, CDW's ATS team was tapped to do the implementation. Cisco, along with CDW's ATS team and internal IT team, worked together to finalize the design, bill of materials, business analysis, process flows and proposed implementation plan - assuring the final project would meet identified expectations.

Involving CDW’s ATS team at such an early stage proved to be a good decision.

“Telephony is a cornerstone of unified communications, and the Cisco telephony solution relies on other services like Active Directory and Microsoft Exchange,” explains CDW Senior Manager, IT Infrastructure, IT Operations, Nick Schmidt. “Each of these pieces had to be included in the workflow for this project. But each was a separate activity that required engagements from engineers from various teams to ensure that all of the pieces worked well together.”

Once the architecture was completed, the team then went to work upgrading the network to make sure it could handle the demands that would be placed on it. Because voice traffic would now run across the network, bandwidth was a particular concern, especially in remote offices. That required not only increasing bandwidth, but making sure the bandwidth was redundant.

In addition to bandwidth, the team upgraded some circuits and switches. To enable SIP trunking, several OC3 lines were added to allow for the number of phone lines CDW expected to need at a given time.

Once the network upgrades were complete, the team decided to upgrade each individual CDW office building to the new infrastructure in a single weekend. Although it would undoubtedly be a busy weekend, it was the only way to ensure that our ability to route calls and manage contact centers wouldn’t be unduly affected, notes Mike Pflieger, CDW senior director of IT operations.

The team started with the CDW office building located in Toronto. This was followed by the four buildings in Illinois and so on down the line. The final office building was completed in March, 2012.

Today, CDW’s Cisco UC infrastructure is adding resiliency, disaster recovery capabilities and a richer set of features. In addition to the capabilities, management is much easier, due in part to integration into the network stack.

“Before, we had call managers linked to each office, so we had a big stack infrastructure in each location that had to be managed – mostly remotely,” Pflieger explains. "To implement upgrades or patches, we had to send IT staff into the field. Now it's all centrally managed with added resiliency to the telephony infrastructure."

It’s also partly due to the addition of SIP trunking, which allows the company to consolidate groups of phone lines and reroute them to different data centers if problems occur. It also allows for more portability, both of phones and employees, and provides resiliency in the cloud.

“That’s important because our business is very time-sensitive,” Stevens says. “One hour of phone downtime can translate into millions of dollars in lost sales.”

The new features also have made a big difference in how responsive sales managers can be to their customers. Garth Huckabay, CDW sales account manager, says that the ability of the new phone system to stack calls means he doesn’t have to miss out on a potentially lucrative opportunity.

“I can take three or four calls simultaneously and manage how I want to handle the calls,” he says. “That means I don’t miss calls anymore. In our line of work, if you miss a call, you may have missed an opportunity.”

The upgraded unified communications infrastructure also provides many benefits around business continuity. This is both in terms of redundancy – if systems go down – and for unplanned situations. Pflieger recalls one recent example:

“Our headquarters isn’t far from Chicago. So when we discovered that the NATO, G8 2012 summits were going to be held in Chicago, we knew that many of our employees wouldn’t be able to get to our downtown location,” he says. “We made sure that all of the affected employees knew how to use the mobility feature to route their calls to wherever they were, so they could service their customers as usual.”

Finally, the implementation of UCCE has streamlined the call center while improving operations.

“Before, we had a situation where everybody was considered a sales agent and could route calls to different people. As a result, calls bounced through the company,” Stevens notes. “We addressed that issue prior to implementing this solution by creating an inbound team that takes those first calls. But now it’s even more effective; we have less frustrated customers and more productive agents.”

Although CDW’s unified communications solution is working well, the company is committed to pushing the envelope when it comes to customer service and productivity.

“We knew that implementing this infrastructure was only the first step on our roadmap,” Stevens adds. “Now that we’ve achieved that goal, we can work on doing more around mobility, collaboration and other productivity-enhancing functions.”

Next up may very well be enhanced video conferencing capabilities. CDW has already installed the Cisco TelePresence Video Communication Server (VCS), which integrates with its Unified Communications Manager, as well as VoIP and IP telephony networks. The next step will likely be to integrate video into the sales and contact-center functions.

“We are on our way to increasing our use of video so that from a desk, cell phone or telepresence room, staffers will be able to fully communicate using any medium that makes sense,” Schmidt adds. “It’s our goal to be able to use any medium to communicate. So I can start an instant message with someone, click a button to call, show them a document, see them face to face, and then find a third party using presence so we can have a three-way video call. It’s not that far away at all.”