Dual monitors bring a tremendous productivity boost to computer-aided design (CAD) and digital content creation (DCC) users, video and photo editors, financial analysts and power users of all stripes. For these users, the benefit of having more information in their field of view, with less time spent tabbing through hidden windows, is immediate.

Many consumer desktop display adapters can support two monitors, but workstation display adapters, with graphics processing units (GPUs) that are specifically designed for dual displays, provide better resolution and application management. It is hard to justify the cost of high-end cards for anything other than complex graphic modeling or data-set work, but the limitations of low-end workstation cards become quickly apparent. That will only increase as Windows Vista continues to replace XP and applications become more graphically demanding.

Compared with its predecessor, this latest 5000-series workstation graphics card reduces the memory bus to 128-bit, but upgrades the memory to Graphics Double Data Rate, version 4 (GDDR4); doubles the memory to 512 megabytes; and delivers more than 50 percent more memory bandwidth. The V5600 employs Unified shader architecture and supports OpenGL 2.1 and DirectX 10’s Shader Model 4.0.
I first installed the V5600 on an HP workstation running Windows XP Pro SP2 (32-bit version), and then installed it on an identical workstation running Windows Vista (also 32-bit version). Two 19-inch LCD monitors were set to 1280 x 1024 resolution. Two Dual Link DVI-I ports (with two DVI-to-VGA adapters) allow any pair of analog or digital monitors to be connected, including 30-inch wide-screen displays at resolutions up to 2560 x 1600 each.

ATI’s Catalyst Control Center defaults to a basic wizard-based system to configure the displays, but a more advanced and intuitive console is readily available at the click of a button. Even the advanced console was simpler than I expected because of an ATI feature called AutoDetect, which transparently distributes graphics power as applications are opened and positioned, eliminating the need to configure settings for individual applications.

The FireGL V5600 can run a single monitor or it can clone monitors to display the same information. The V5600 allows you to use both displays to either stretch or extend the desktop. Stretching the desktop treats both monitors as a single display and locks them into identical settings. This may seem simpler, but it is needlessly limiting. Using extended mode, the second display is “attached” to the primary display to expand the desktop area. Extended mode allows independent control of each display’s resolution, refresh rates, color-quality settings, rotation and position. It’s easy to set up an extended-mode display to have a stretched desktop appearance and still have independent settings, so that’s what I did. (I later found that the stretch mode is not supported in Windows Vista.)

I don’t do high-end CAD or complex modeling, but I do tend to run a lot of applications simultaneously. Each workstation ran separate 2-D and 3-D design applications, a full market-data application and eight other desktop or Web-based applications. Each application responded with crisp images, great color and clarity. The size and position of windows are retained as they are opened and closed, and within a few minutes, I had my work flow fully established.

Because none of this seemed to be slowing the V5600, I added a DVD to the mix. The movie played without a hitch, and while some credit for that goes to the workstation’s CPU as well as the ATI GPU, the image quality of the video playback was excellent. I ran a fairly detailed virtual 3-D home tour, and the motion frame rates were remarkably smooth, especially considering that the other applications were still running. ATI’s AutoDetect seemed to be doing its job, as performance was consistently good in Vista and XP, across both screens and from one application to the next. The V5600 produced excellent shading and textures, and the Aero interface of the Vista computer looked simply terrific. In fact, replacing my low-end, Vista-certified adapter with the V5600 in the Vista workstation increased its Windows Experience Index for graphics from 3.5 to 5.9.

How We Ran the Test

To test the V5600’s performance more objectively, I used the SPECviewperf 10 evaluation software from the SPECopc project group (spec.org) to measure the OpenGL 3-D rendering performance that workstation adapters are built to deliver. I also used Futuremark’s 3DMark06 to test DirectX performance. As explained on SPEC’s Web site, a valid comparison cannot be made between benchmarks run on Vista and XP because of the significant differences in the way the operating systems handle 3-D graphics. Most notably, the Aero interface is itself a 3-D application that requires GPU resources. So while there were differences across the various tests, the V5600 delivered consistent rendering performance for OpenGL applications running under both operating systems. DirectX 3-D performance was not as impressive, but the results showed the card to be comparable to an entry-level gaming card. In all tests, the V5600 absolutely crushed my low-end display adapters.

ATI runs the GDDR4 memory and the GPU at pretty high clock rates to get these dramatic results, but the large cooling assembly quietly keeps the heat well under control. The full-size, single-slot card installs via a PCI-E x16 bus, and its surprisingly modest power draw requires no power adapter.

The card has what appears to be connectors for ATI’s CrossFire bridge technology, which allows two (or more) graphics adapters to work as one, but I’m not sure why. There is no CrossFire option for the FireGL V5600 in the Catalyst Control Center software. In a workstation that has two PCI-E slots, a second card can still be added to control another pair of monitors, and they can all be managed by the Catalyst Control Center software, but the GPUs will work on each pair independently.

There was one small problem that occurred during installation on both XP and Vista that relates to the on-board audio drivers. ATI’s more expensive workstation graphics cards include high-definition audio capabilities, but the V5600 has no audio at all. The installation wizard, by default, disabled the on-board audio device and installed the drivers for the nonexistent audio devices. I may have missed an option to omit the audio driver, but I could not uninstall the ATI audio driver separately. Once the workstations rebooted for the video-driver installation, it was necessary to reboot again and enable the on-board audio in the BIOS, and then disable the ATI audio driver in the OS. Downloading and installing the driver updates does not replicate the audio problem.

That glitch aside, the performance of the ATI FireGL V5600 is going to make it harder for me to justify buying any more low-end multidisplay cards, especially as we make plans to roll out Vista. 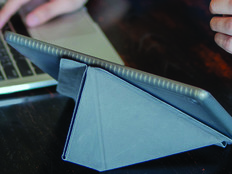